Menu
Home‘I’ll have what he’s having’: Told he had little time left, my rabbi-dad wanted a last meal at Katz’s deli
Courtesy of Avi Dresner

There was no way my father, 92 and with stage 4 metastatic colon cancer, could wait in the 40-minute line for what we knew would be his last meal at Katz’s Deli, so we dropped my sister off and went to park. Miraculously, after a single circling, we found a parking spot a block from the famous deli’s door.

Dad also cannot go an hour without a bathroom break, but the angels were with us again: a Marshall’s with not only a public restroom but an elevator to get to it was stationed halfway between our car and our lunch. Inside Katz’s, the security guard checking vaccination cards took one look at dad hunched over his walker and let us through.

“We’re all going to be there someday,” the guard said. He might have added, “If we’re lucky.”

This pilgrimage to the temple of pastrami was among a handful of items on the bucket list that my father, Rabbi Israel S. Dresner, drew up within 24 hours of the doctors telling him last month that he would not make it to his 93rd birthday in April.

He wanted to see one final Broadway show, so my sister, Tamar, took him to “Book of Mormon” the day before Thanksgiving. He wanted to daven one more time at Central Synagogue in Manhattan, which is where we went after Katz’s. And he wanted one final pastrami on rye at this venerable institution of the old Jewish Lower East Side, where dad was born, on Fifth Street between Avenues C and D.

Despite his age, Tamar and I were devastated by the finality of the doctor’s prognosis. It’s only human to want more time. Dad, on the other hand, was stoic. A lifelong history and geography buff, who has always preferred the intellectual to the emotional, he spent the entire visit telling the nurse all about the Philippines, where she was from, and the oncologist all about Lebanon, where he was born.

He didn’t ask a single question about the disease. He was ready — and ready to fill whatever weeks he had left, as he had filled the nine decades before.

My dad, known as Sy, was born a few blocks from Katz’s on the Lower East Side, and grew up in Brooklyn. He served in the Army during the Korean War and on New Jersey pulpits for 37 years. He was a pioneering civil rights crusader, who organized the largest mass arrests of rabbis and interfaith clergy in American history, and was close to the Rev. Dr. Martin Luther King Jr., who asked him to deliver the prayer at the foot of the Pettus Bridge in Selma, Alabama, in 1965.

That afternoon at Katz’s, I thought about all of the photos we have of Dad and King as I took in the hundreds of floor-to-ceiling portraits of actors, athletes, politicians and other celebrities that adorn the deli’s walls.

We’d been going to Katz’s since the 1970s, when the Lower East Side was seedier than a loaf of Jewish rye. We returned pretty regularly for father-son time up through my bar mitzvah in 1982, and in the late 1990s and early 2000s, when I was a young — and poor — adult living in Manhattan.

Like my dad, through all those decades, Katz’s never seemed to change. As we walked in last week, we were handed the same raffle-ticket style stubs on which the deli men record the orders at each station of the kosher-style cross. We walked by the old “Send A Salami To Your Boy In The Army” signs, and took a table near a photo of Rob Reiner, who transformed Katz’s from New York institution to international tourist destination with “When Harry Met Sally.”

It’s in that 1989 film, of course, where Reiner’s own mother brilliantly responds to Meg Ryan’s scene-stealing fake orgasm with the immortal line, “I’ll have what she’s having.” That’s basically what I’d been thinking since Dad’s diagnosis: I hope I can approach my own death with similar equanimity and dignity.

It’s not just the bucket list. Dad has also worked alongside Tamar and me over the past weeks to plan his own funeral, including who should speak and what tallit and kippah he should be buried in. We have recorded him offering blessings for my 9- and 10-year old sons’ future bnei mitzvah, and have begun to draft his death notice together. We even picked out his casket together from the funeral home’s website.

When we asked what he wanted his last Broadway show to be, Dad immediately responded, “Book of Mormon.” He thought the show would be about Mormonism in the same way that he thought “Black Panther” would be about the Black Panther Movement. He loved it anyway.

From Katz’s, we headed uptown for the high but haimish Broadway musical-level production that is Kabbalat Shabbat services at Central Synagogue, where Rabbi Angela Buchdahl had generously offered to honor him on what just happened to be International Human Rights Day. She surprised us by introducing him with a slideshow of photographs of Dad and Dr. King, and reading from one of the telegrams King sent Dad in jail after my father’s arrest in Tallahassee during the first Interfaith Clergy Freedom Ride in 1961.

“You are the valiant ones. All America went to jail with you. Our spiritual limitations are shown by your physical incarceration,” it says. “Your heroism is the nonviolent movement’s witness to a world that has seen too little of the spirit and purpose of the prophets and disciples.

“Today it is your valiant act that touches the conscience of Americans of good will. Your example is a judgement and an inspiration to each of us.”

I looked up at the gold lettered Hebrew words above Central’s ark: da lifnei mi atah omed; know before whom you stand. Similar words were on the synagogue’s program: da mai’ayin batah u l’an atah holeich; know where you have come from and where you are going.

The next item on Dad’s bucket list is a visit to his parents’ graves – a fitting final stop, as that is where his physical journey will end, too. When my time comes, whenever it may be, I hope to have what he’s having now.

Avi Dresner and his sister, Tamar, are making a documentary about their father, Rabbi Israel S. Dresner, and his relationship with the Rev. Dr. Martin Luther King Jr., called “The Rabbi and the Reverend,” aimed for 2023 release. Email: avidresner7@gmail.com. 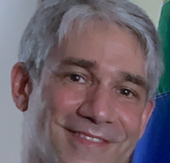