Near Texas synagogue, a ‘bubble’ is pierced by attack 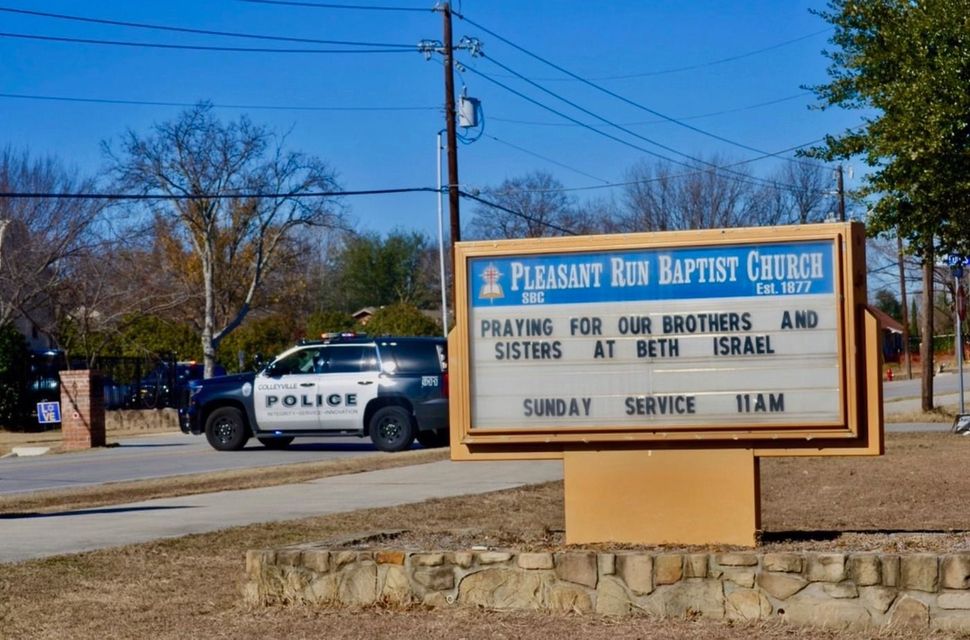 Photo by Haya Panjwani for the Forward

COLLEYVILLE, Texas – Lisa Bain Grossman, who lives next door to Congregation Beth Israel, had a sign on her front lawn Sunday that read “Love” with a Star of David in place of the “o.”

Grossman said she had made the sign back in 2018, when 11 people were shot dead during Shabbat services at the Tree of Life synagogue in Pittsburgh, distributing copies at an interfaith vigil Beth Israel hosted following that attack. Now, her own community was at the center of a national discussion of antisemitism and synagogue safety, after a British man with a gun disrupted Beth Israel’s Shabbat services and held its rabbi and three others hostage for hours.

“We feel like we’re in a bubble here but we’re really not,” Grossman told a television crew from NBC News, adding that the police had banged on her door Saturday morning as the hostage crisis began and ordered her to evacuate.

The neighborhood around Beth Israel was swarming with journalists, law enforcement officers and well-wishers all day Sunday, after the hostages escaped unharmed and their captor, Malik Faisal Akram, died late Saturday. Police and federal agents flowed in and out of the synagogue and emergency vehicles blocked off the road in front of it, amid an otherwise calm suburban swath of new mansions and manicured lawns.

Colleyville is part of the booming corridor between Dallas and Fort Worth, a region that has an estimated 85,000 Jewish residents. Only Beth Israel and a Chabad serve the area northwest of Dallas.

Rabbi Levi Gurevitch, who runs the nearby Chabad of Southlake, said that he learned of the attack during Shabbat services and was quickly swarmed by well wishers and some armed community members who showed up to protect the congregation. The two communities are closely linked.

“It hit very close to home,” Gurevitch said. “People who come here will go there sometimes, people who go there will come here for classes and events.”

Gurevitch said young congregants are often the only Jews in their public school classes and have to receive special permission to take off holidays like Yom Kippur. But he also said that local politicians support the community, noting that Southlake’s mayor attended the Chabad Hanukkah candle lighting in December.

The area is known for its top-ranked school districts and building boom. Violent crime is rare, and a neighbor whose house overlooks the synagogue said on Sunday that people are used to leaving their doors unlocked.

“It’s a one off,” said the man, who declined to provide his name. “This is not a neighborhood where anything happens.” He called Beth Israel “good neighbors.”

Grossman, the synagogue’s neighbor, said that after the police ordered her to evacuate from her home on Saturday, she drove around town, stopping at local churches and an IHOP, and thought to herself about Cytron-Walker, “He’s going to be OK.”

“Rabbi Charlie is friends with all the faith leaders,” she said. “It’s just like he’s the best dad, he’s so jolly, he remembers everybody’s name.”

Steven Hayes, 64, traveled from his home in Fort Worth to a church across from the Colleyville synagogue to show his support for the community. Hayes said he grew up just down the road from where Beth Israel now stands, part of one of the town’s only Jewish families at the time.

He marveled at the new construction that has replaced empty fields and modest ranch homes with multimillion dollar mansions.

“This was very much a little podunk town,” Hayes said. “There were no Jews in this neighborhood. I didn’t know a Jew, not one.”

“There were no Jews in this neighborhood,” one man recalled of his childhood in Colleyville.

The church where Hayes showed up had opened itself as a staging area for journalists and other visitors.

“Prayers for our brothers and sisters at Beth Israel,” read the sign board in front of Pleasant Run Baptist Church, which was established in 1877. The church parking lot was filled with members of the media, including several television crews that had set up satellite dishes and lighting. Behind the building, kids practiced baseball on a modest field ringed by lawn furniture, workout equipment and a spare tractor tire.

The house directly across from the congregation flew a flag reading, “Let’s Go Brandon” – intended as a profane insult against President Joe Biden – a reminder of the area’s divided politics. Biden won roughly 58% of the vote in the neighborhood surrounding Beth Israel, compared to 40% for former President Donald Trump.

The area made headlines late last year after a a local school district’s head of curriculum was quoted as saying that a new state law meant that teachers had to provide students with “opposing” views of the Holocaust. Though she was accused of antisemitism, the official said that she supported Holocaust education and was actually attempting to be critical of the law.

Two hundred miles away in Austin, a synagogue with the same name, Beth Israel – but unrelated – was set afire on Halloween, causing $25,000 in damages. An 18-year-old was charged with the arson.

Police have still not released much information about the Colleyville attack.

“It is important to note that this was a random act of violence,” said Beth Israel’s president.

On Sunday, vehicles came and went from the synagogue complex, where a tall black fence rings a parking lot and tan brick building that is is nondescript save for a large Star of David at its peak. At one point, a Colleyville fire truck arrived; at another, FBI agents appeared to be using surveying equipment on the road in front of the synagogue.

The synagogue leadership has remained relatively quiet as Cytron-Walker and the other hostages – whose names have not been released – recuperate.

Cytron-Walker said in a statement that the gunman had become “increasingly belligerent” during the last hour before the hostages were rescued, and that prior training with law enforcement had helped the congregants to escape.

“Without the instruction we received, we would not have been prepared to act and flee when the situation presented itself.”

Michael Finfer, the synagogue’s president, said in the same statement: “It is important to note that this was a random act of violence. Indeed, there was a one in a million chance that the gunman picked our congregation.”

Near Texas synagogue, a ‘bubble’ is pierced by attack