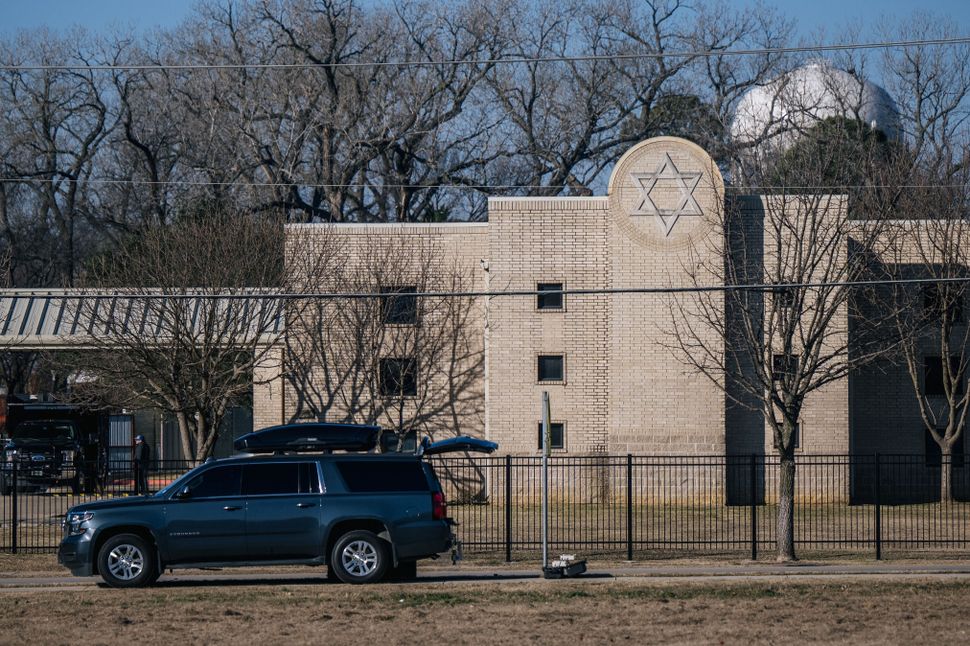 COLLEYVILLE, TEXAS – JANUARY 16: Law enforcement officers conduct inspections around the Congregation Beth Israel synagogue on January 16, 2022 in Colleyville, Texas. All four people who were held hostage at the Congregation Beth Israel synagogue have been safely released after more than 10 hours of being held captive by a gunman. Yesterday, police responded to a hostage situation after reports of a man with a gun was holding people captive. (Photo by Brandon Bell/Getty Images) Photo by Getty Images

COLLEYVILLE, Texas — During the nearly 11 hours he was held hostage inside Congregation Beth Israel on Saturday, Rabbi Charlie Cytron-Walker focused on what he’d learned in security workshops — “Do whatever you have to do to get out,” he said — and on making sure that the gunman saw him and the three other congregants inside the synagogue as human beings.

But Cytron-Walker was able to steal brief moments for reflection, silently praying the Sh’ma and offering the Hashkiveinu: “Grant, O God, that we lie down in peace, and raise us up, our guardian, to life renewed. Spread over us the shelter of your peace.”

As the hours passed and Malik Faisal Akram, the British gunman, became increasingly agitated, Cytron-Walker saw an opportunity to escape. One hostage had been released earlier in the day, and Cytron-Walker told the two men who remained with him to run for a fire door before throwing a chair at the assailant and sprinting after them. 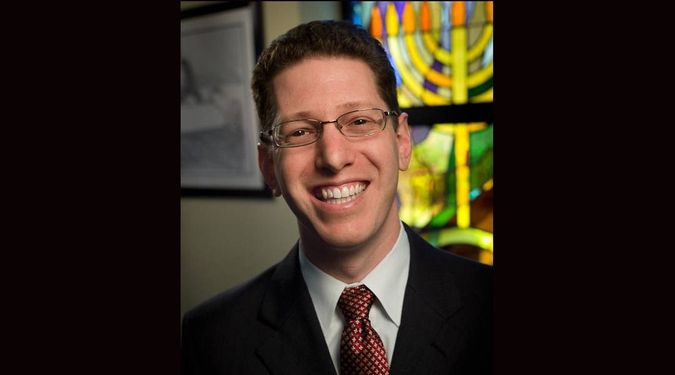 “It was really a matter of looking and waiting for an opportunity where all of us could go and no one would be left behind,” Cytron-Walker said in an interview with the Forward on Monday morning.

Cytron-Walker said that Shabbat morning services had been interrupted by a man knocking on the synagogue’s door asking for help. The rabbi let the man in and made him tea, hoping to learn more about what had brought him to the Reform shul in a quiet Dallas suburb, before returning to lead services.

During the Amidah, a silent prayer, Cytron-Walker had his back turned to Akram and heard a distinctive click.

“I was a little suspicious when I heard that click but I was hoping it wasn’t an actual gun,” Cytron-Walker said. “I went over to him — where he and I could just have a conversation — and that’s when he pulled the gun on me.”

Akram’s first demand was to speak to Rabbi Angela Buchdahl, the leader of Central Synagogue in New York City, who he believed could free Aafia Siddiqui, a Pakistani neuroscientist imprisoned on terrorism charges at a facility near Beth Israel.

Buchdahl ultimately spoke with Akram twice, but she declined to detail those conversations, citing security concerns.

Cytron-Walker said that most of the nearly 11 hours that he was held hostage consisted of sitting around, speaking with the FBI’s hostage negotiator, and making conversation with Akram.

“We listened to him, we answered his questions, we shared a little about ourselves,” Cytron-Walker said, “and every moment was terrifying.”

Cytron-Walker credited the rapport they developed with Akram with his decision to release the fourth hostage in the afternoon. But as the afternoon turned to night, the prospects for a peaceful resolution began to dim. He had been taught in FBI and Anti-Defamation League security workshops that bold action was sometimes necessary — in this case, seizing on a moment when Akram appeared distracted and the trio were near an exit to throw a chair at him and run.

“Having that information really provided me with the courage to do what I need to do,” Cytron-Walker said. “It allowed me the willingness to try something that was incredibly, incredibly risky.”

Footage of the moment when FBI rescued the hostages at this Texas Synagogue. The hostage taker has been identified as a 44 year old British Islamist who had recently traveled to US. He is not the brother of Pakistani Al Qaeda terrorist Aafia Siddiqui. Investigations are ongoing. pic.twitter.com/omJxITvU4b

Many have hailed Rabbi Charlie, as he is widely known, for both bravery and a unique ability to manage such a tense situation. Rabbi Andrew Paley, a Dallas police chaplain, told the Times of Israel that law enforcement had praised Cytron-Walker’s “calm and collected” manner throughout the standoff.

But Cytron-Walker said that while clergy are trained to reduce anxiety and hide their own stress, the situation could have easily ended in tragedy regardless of who was in the room.

“I’m not going to say that there’s anything special about me,” he said. “We were very fortunate.”

Since escaping Saturday night, Cytron-Walker said he was trying to balance processing the traumatic episode — and fielding phone calls from President Joe Biden and Israeli Prime Minister Naftali Bennet — with the needs of the Beth Israel’s roughly 125 families who have also been reeling from the attack on their synagogue.

With police still investigating the synagogue building, the congregation has organized a prayer service for Monday evening at a nearby church, which will provide Cytron-Walker with his first formal opportunity to address the community.

He said the hostage standoff is a searing reminder of how dangerous it is to allow antisemitism to go unchecked.

“Somebody might think that they’re just making a comment, or just making a joke,” Cytron-Walker said. “Unfortunately someone, somewhere, is going to take that hatred and they’re going to go to a dangerous place with it.”