How do Jewish groups welcome Afghan refugees? With a Muslim caseworker. Aliza Silver-Schack of Am Yisrael Synagogue makes an afghan for Afghan refugees resettling in Chicago.

When a refugee family arrived from Afghanistan to their first apartment in Chicago, a case worker from a local Jewish social services agency was there to welcome them. His name? Abdul.

The family was overwhelmed to see their new home fully furnished. As the older boys helped with suitcases, the young daughter ran from room to room, showing her brothers some of the many items waiting for them – stuffed animals native to their homeland and afghan blankets hand-knitted by volunteers with notes of welcome.

Abdul, a young man with a gentle, kind, and positive demeanor, spoke on condition his surname be withheld to protect his family in Afghanistan. He asked that the refugee family not be named to protect their relatives in Afghanistan as well. 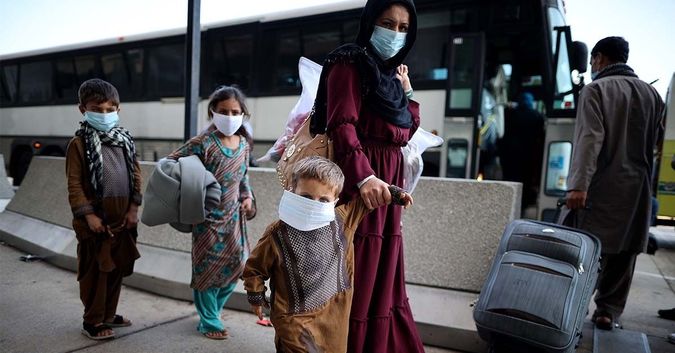 Refugees board buses that will take them to a processing center at Dulles International Airport after being evacuated from Kabul following the Taliban takeover of Afghanistan August 27, 2021 in Dulles, Virginia. By Chip Somodevilla/Getty Images

Once an Afghan refugee himself, Abdul, who is Muslim, works for the agency, JCFS Chicago, to make the refugees feel at home in their new land. For him, the family’s arrival was the end of a long process that began on Aug. 31, 2021, the day the United States withdrew its last troops from Afghanistan.

As the world watched news reports of refugees crowding the Kabul airport after fleeing their homes, carrying their only possessions, the Jewish community in Chicago leapt into action.

In early January 2022, this family was the first of many Afghan families arriving in Chicago to be helped by the agency. Volunteers from Am Yisrael Conservative Congregation in suburban Northfield, Beth Emet Synagogue in Evanston, as well as several other area synagogues, also pitched in.

The JCFS Chicago employees and Am Yisrael volunteers worked against the clock to make sure accommodations were ready for the arrival of the family of six, which had spent the previous several months at Fort McCoy in Wisconsin. 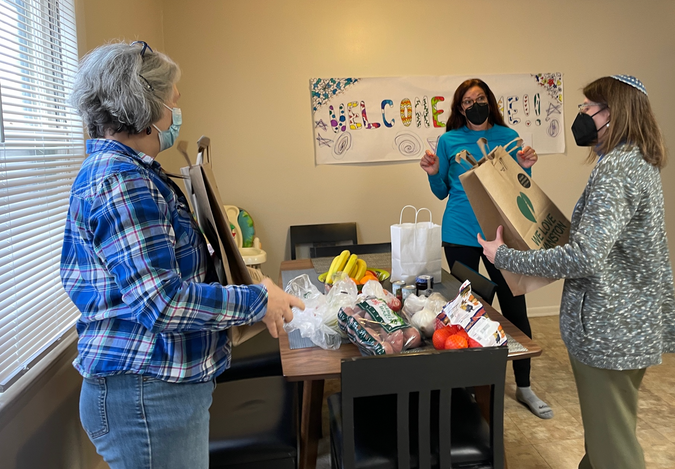 “We found out on Sunday that they were coming Tuesday morning,” said Daniel Schack, a lay leader of Am Yisrael, though he and dozens of others had been preparing for the arrival of many refugee families.

Schack had been working for weeks with Am Yisrael volunteers and JCFS Chicago to raise the $10,000 needed to cover rent, to find and furnish the apartment with help from the Chicago Furniture Bank, as well as arranging tutoring and mentoring to help the family acclimate to America.

His daughter also made one of the afghan blankets for the daughter of the family. “Ninety-five percent of everything came from the synagogue,” Schack said.

“Everyone is just clamoring to understand Afghan culture so that they can build the most respectful and authentic relationships they can,” said Jessica Schaffer, who oversees the immigration program for JCFS Chicago.

Schaffer started with JCFS Chicago in 2015, helping to resettle Russian-speaking refugees, not necessarily Jewish, who had family ties in the area. Her grandparents on both sides were refugees.

“The refugee experience is very personal for me,” she said.

But its immigration legal services program remained active, and it convened the Chicago Jewish Coalition for Refugees, an advocacy coalition of about 20 organizational partners, to continue to support refugees. Aliza Silver-Schack of Am Yisrael Synagogue makes an afghan for Afghan refugees resettling in Chicago.

By the time the resettlement program reopened in October 2021, it had 10 weeks to rebuild infrastructure, hire several new staff, put policies and protocols in place, work with landlords to find housing for program participants, and line up community co-sponsors who would welcome refugees alongside them.

The first family arrived on Jan. 4, and Schaffer said the group expects “a steady flow” through mid-February.

The organization estimates it will resettle up to 110 individuals and, at the end of this week, will have welcomed 44 individuals so far this year. JCFS Chicago asked each co-sponsor to raise $10,000 for HIAS’ Welcome Campaign, which supports all the families resettled by the program based on their needs.

The U.S. Department of State provides JCFS Chicago with $1,225 per person to use for things like rent, utilities, transportation, and clothing. Additional funds come from the Jewish Federation of Metropolitan Chicago and other local and national foundations, including The Shapiro Foundation through Jewish Federations of North America.

All refugees go through 18 to 24 months of rigorous vetting conducted by various international agencies in addition to the federal government. They receive cultural orientation classes in addition to medical screenings, background checks, and biometrics.

When the families arrive, along with the infrastructure support, they also have Abdul, who came to Chicago on a Special Immigrant Visa in 2017.

“I’m happy to help refugees,” he said, “because I was a refugee,” echoing similar sentiments that Jewish volunteers have shared about their ancestors. Abdul and his wife have four children, the same as the first family he helped to resettle. His parents and siblings remain in Kabul.

“For the Afghan people, this is a repeated situation,” Abdul said, describing how he and his family fled to Pakistan for 20 years when he was six months old, returning home to Afghanistan in 2002. Leaving home, he said, was ultimately a good thing but “something that’s a little bit sad for us.”

Afghans are lucky to be in the U.S., he said, and they can adjust themselves to a new environment because they have experience doing just that.

“They start life from zero, they make something, and they went back and start again from zero,” he said.

Now a graduate student studying political science, majoring in international relations and comparative politics, Abdul said he already feels part of the community in Chicago, where everyone has been welcoming. The family also feels welcomed, he said, grateful that everything was ready for their arrival, and that their children will now be able to get an education in a safe and peaceful environment. Their neighborhood on the north side of Chicago has a mosque as well as hallal food nearby, making their adjustment a little easier.

The family, who agreed to answer questions only through Abdul, received many offers of support from the Jewish community that they could not accept, such as a rent-free apartment for a year — the goal of the program is for immigrants to find employment and transition away from outside help, said Abdul. That transition, however, is often very difficult.

“They’re in too dark of a place right now,” he said, acknowledging the trauma many refugees experience after leaving a dangerous environment and acclimating to a foreign home.

Now Abdul’s job is to help the Sayyids adjust to every detail of American culture. In Afghanistan, for instance, when someone needs a doctor, they just go, whereas here they need to make an appointment and may wait weeks or months to be seen.

In Afghanistan there is more of a sense of belonging, he said, family is more supportive, whereas here people are more on their own. He and his colleagues at JCFS Chicago encourage families to find community support through groups such as the Muslim Women’s Resource Center.

Other aspects are strikingly familiar.

“I saw a Jewish woman offering salt and bread” to the family, Abdul said, “which is much the same as Afghan culture.”

The Jewish value of welcoming the stranger also resonates with Afghans, he said.

“That’s how we are working too, connecting the world. Your Jewish organization is willing to help Afghan Muslims, so why would I hesitate to help my people in working with your organization?”

How do Jewish groups welcome Afghan refugees? With a Muslim caseworker.