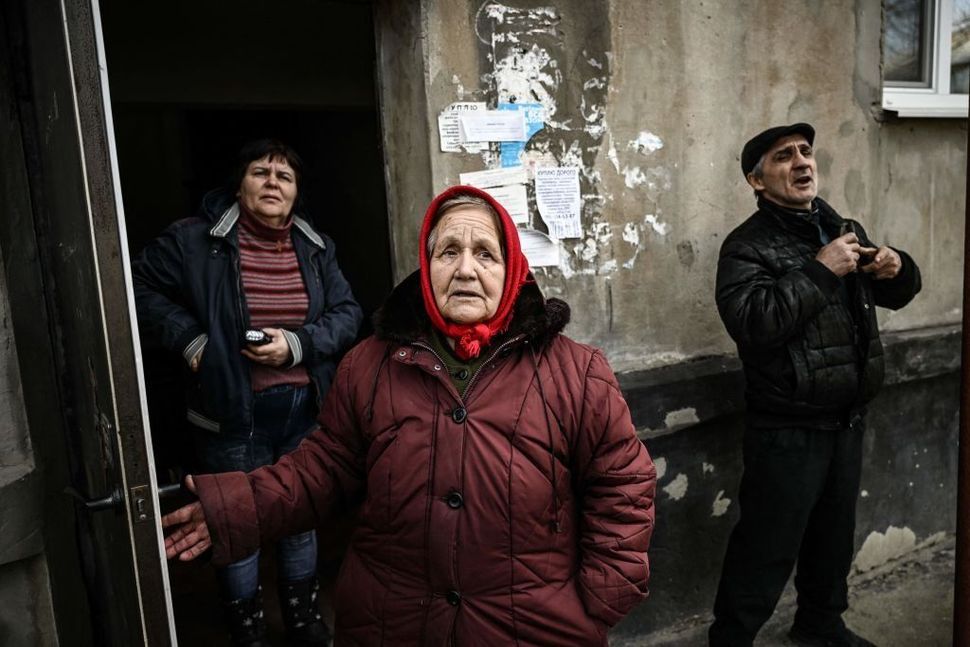 People stand at the door of their building’s basement they use as a shelter during bombings in the town of Schastia, near the eastern Ukraine city of Lugansk, on February 22, 2022, a day after Russia recognized east Ukraine’s separatist republics and ordered the Russian army to send troops there as “peacekeepers.” Photo by AFP via Getty Images

With Russian troops moving into eastern Ukraine following Moscow’s official recognition of two breakaway separatist enclaves on Monday evening, local Jewish leaders have expressed concern not only that their constituents could be displaced by renewed fighting, but that the Kremlin may attempt to use antisemitic provocations to delegitimize their country.

Speaking to Haaretz from the eastern city of Dnipro, Rabbi Meir Stambler, the chairman of the Federation of Jewish Communities of Ukraine, said that he is more worried about the possibility of antisemitic provocations carried out by Russian agents than a full-scale war.

“We were never concerned about security, but now we are worried that the situation might change, so that’s why we are working on safety precautions for all the rabbis, communities, schools and synagogues,” Stambler told Haaretz. “They want to [accuse] Ukrainians of being antisemites or fascists.”

Russian media was filled with false reports of anti-Jewish persecution during the early days of the conflict, with Russian President Vladimir Putin warning in March 2014 that the “rampage of reactionary forces, nationalist and antisemitic forces going on in certain parts of Ukraine” might necessitate a military intervention and Jewish leaders in turn accusing the Kremlin of staging antisemitic incidents for propaganda purposes.

More recently, top Russian officials have accused Ukraine of carrying out a “genocide” in two breakaway separatist enclaves in the east of the country.

But while Stambler doesn’t believe that a full-scale invasion, and its concomitant refugee crisis, are likely, he said that his organization is also preparing to distribute emergency food kits to 20,000 Jewish families across the country.

Stambler was one of several Ukrainian Jewish leaders who have said that they are preparing emergency plans to evacuate and house large numbers of refugees should the conflict escalate into all-out war.

Speaking with Haaretz on Tuesday, Chief Rabbi Yaakov Bleich said that while Ukraine is much better armed and prepared than when the conflict with Russian broke out in 2014, a serious escalation could see a new wave of refugees fleeing the fighting.

“In the Jewish community we have contingency plans to accept refugees in the west if people need to leave. Our community is preparing a large complex in Zhytomyr, 100 kilometers west of Kyiv, for people who may want to evacuate voluntarily and in case we have refugees from the east,” he said. “We didn’t have that in 2014, we weren’t ready for it.”

Moscow has amassed a reported 150,000 troops on the Ukrainian border, and while Russian officials claim there is no intention to invade, Western leaders believe otherwise.

An invasion would mark the largest escalation since Russian forces annexed the Crimean Peninsula and orchestrated an insurgency in the eastern Donbas region – which has claimed more than 14,000 lives to date. A massive wave of Ukrainian immigration followed, with 30,000 Ukrainian Jews moving to Israel between 2014 and 2018.

“We’re not publicizing everything now for security reasons but there are communities busy day and night worrying about contingency plans,” said Bleich.

While Israeli communal leaders have said that local Jews were determined to stay, a sense of insecurity and uncertainty has begun to spread in recent days.

Ilya, a Jewish businessman from Kyiv who asked that his last name be withheld for security reasons, said that people have been growing nervous in recent days.

Russian Jews say ‘sorry about this’

He was one of thousands of Jews living in Kyiv who received a prerecorded voice message from local Rabbi Moshe Azman last week, inviting them to take shelter at Anatevka, a refugee center he built outside of the city to house war refugees in 2016, should they need to flee the capital.

Rabbis from all denominations have taken the lead in not only calming the growing fear in the community but in “gathering needed things such as medication, warm clothes and everything that might be needed in the case of the war,” Ilya said.

“I’ve received dozens of messages from Russia Jewish friends in Moscow saying ‘sorry about this, we don’t want a war, we didn’t vote for Putin.’”

Speaking by telephone from rebel-controlled Luhansk, Anna said that “the most terrifying part is uncertainty, not knowing what comes next.”

There is great “fear of the unknown and of the bombing. I was here in 2014. We didn’t have gas, water, or communications for more than two months. I hope it won’t be as long this time around but it still causes great anxiety.”

“At the moment I can’t say that people are leaving” but “some people are slowly packing to be ready to evacuate,” she said. “But one-two strikes and they will leave straight away. Especially those who lived through 2014. For now we are sitting, observing and waiting for what comes next.”

Several families from eastern Ukraine have already fled to Russia and are being assisted by local communities, said Boruch Gorin of the Federation of Jewish Communities of Russia.

In a statement, the federation said that it has “organized humanitarian actions to provide assistance to all needy refugees of Donbas, regardless of nationality and religion.”

“In general the Jews and communities in the Former Soviet Union are still very close to each other and help each other,” explained Russian Chief Rabbi Berel Lazar. “So wherever and whenever a Jew will turn to us for help we will do our best to support him.”