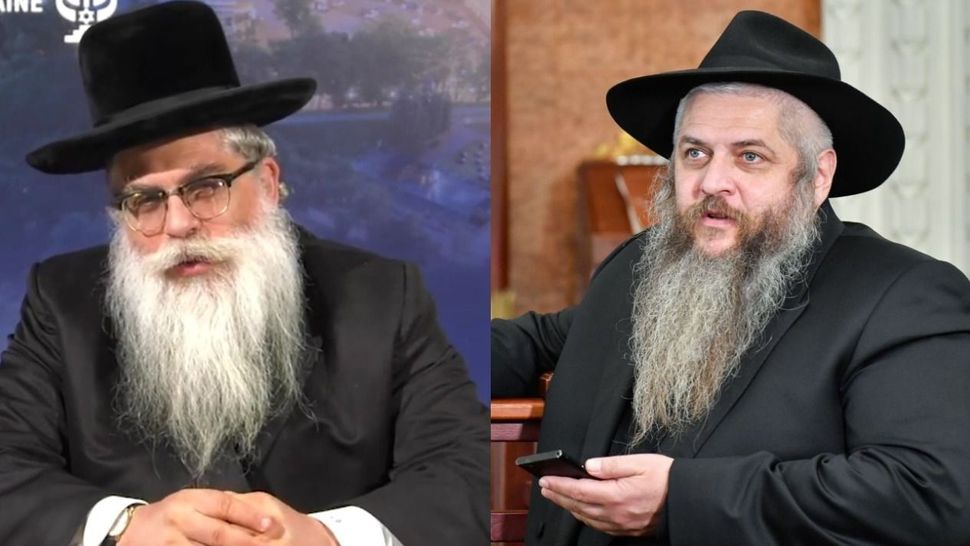 Rabbi Yaakov Bleich (left) and Rabbi Moshe Azman (right) both claim to be the chief rabbi of Ukraine. Image by SERGEI SUPINSKY/AFP via Getty Images/screenshot

The chief rabbi of Ukraine is a 57-year-old U.S.-born former member of Israel’s Karlin-Stoliner Hasidic sect who was once an executive member of the World Jewish Congress.

The chief rabbi of Ukraine is a 55-year-old Russian-born member of the Chabad-Lubavitch movement who is close to associates of former President Donald Trump and recently created “Anatevka,” a village for displaced Jewish families inspired by “Fiddler on the Roof.”

The two men — Rabbi Yaakov Bleich and Rabbi Moshe Azman — have since the Russian assault on Ukraine began a week ago each posted a series of dramatic videos about their efforts to evacuate Jews and raised millions of dollars to support them. Their dueling claims to be the country’s top Jewish leader date back two decades, a fraught history involving many questionable characters.

“Remember that he who does not care and he who agrees silently — that is an accomplice to a crime, a war crime, a crime against humanity!” Rabbi Azman declared in a video posted on Wednesday, of him holding a Torah scroll in front of the ark in a Kyiv synagogue.

Warning Russian Jews that their silence would be remembered and pledging to stay and care for those unable to flee, he added in Russian: “I never thought, even in my worst nightmare, that I might have to perish under the shells of Russia, where I was born, where I went to school, where I have many friends, who are silent.”

Meanwhile, Bleich has been publishing “live updates” via YouTube on a daily basis, using an Ukrainian flag as a backdrop.

“We already have evacuated some people,” he said when the assault began last Thursday. That evening, he released another video, pleading for help: “We are sheltering in place outside of Kyiv in our camp until tomorrow morning at 6 a.m. when we hope we will be able to hit the road,”

For viewers, it might seem as if Bleich is on the ground assisting his flock at a time of great need. In fact, he has been making the videos from his home in the Hasidic enclave of Monsey, New York, where he received a call from President Volodymyr Zelenskyy this weekend and, as of Wednesday morning, had raised more than $1.4 million online for Kyiv’s Jewish community.

Bleich didn’t immediately respond to a request for comment.

On social media, a Twitter user mocked the dueling claims, posting a picture of thousands of Chabad emissaries posing for their annual group photo with the caption, “Exclusive photo of all of those claiming to be the Chief Rabbi of Ukraine.”

A title in dispute

The competing messages highlight an ongoing dispute over who is the official chief rabbi of Ukraine for close to two decades. The government views the chief rabbi as the representative and liaison to the Jewish community. 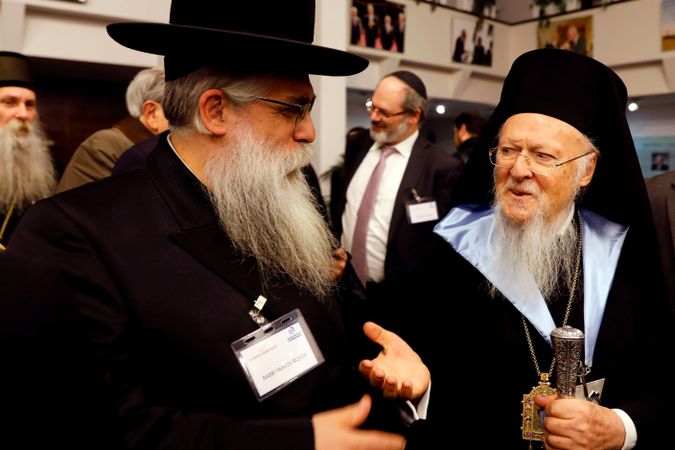 Rabbi Yaakov Bleich (L) speaks with Ecumenical Patriarch of Constantinople Bartholomew I (R) after he was presented with an honorary doctorate at the Hebrew University in Jerusalem on December 6, 2017. Image by GALI TIBBON/AFP via Getty Images

Bleich was widely recognized as chief rabbi of both Kyiv and Ukraine in 1992, when the country declared its independence from the Soviet Union, although he was never properly elected. He became head of an ancient synagogue located on Shchekavytska Street in Kyiv’s Podil neighborhood, which was, at the time, the only functioning synagogue in the capital.

In 2003, the Chabad-Lubavitch movement appointed Rabbi Azrael Haikin, who now resides in the Crown Heights neighborhood of Brooklyn, as the country’s chief rabbi, a move that drew confusion at the time. He is in his 80s, has not lived in Ukraine since 2008, and has not been vocal since the war began.

That same year, Rabbi Alexander Dukhovny, a Ukrainian native, was selected as the Reform movement’s chief rabbi in 2003. Dukhovny, 71, recorded an emotional video message from a basement in Kyiv, earlier this week. “It’s a difficult time, but I know you are with us,” he said in the video, thanking people who have donated to the Reform communities across the country. “We know that, always, good is overtaking evil.”

Neither Dukhovny nor Haikin ever got official recognition from Ukraine’s government. 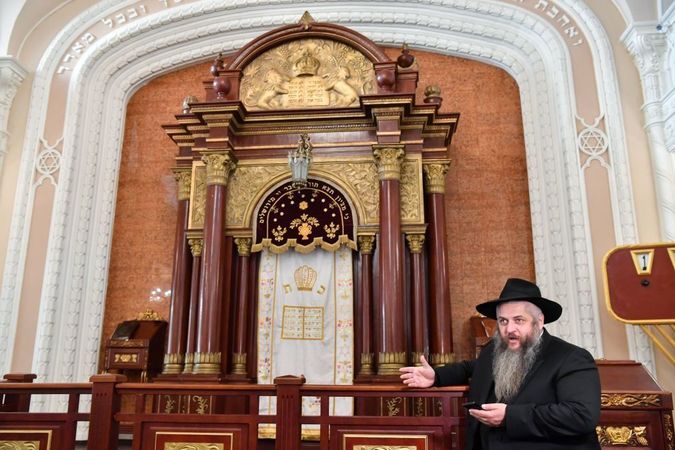 Moshe Azman, Chief Rabbi of Ukraine, speaks to AFP journalists inside a synagogue located in central Kyiv on April 22, 2019 Image by SERGEI SUPINSKY/AFP via Getty Images

Azman challenged Bleich for the title in a 2005 election. Born in St. Petersburg, he was close to Viktor Yushchenko, who had been elected president of Ukraine the year before after surviving an assassination attempt by poison during the volatile campaign. Yushchenko named Azman as his liaison to Ukraine’s Jewish community.

But Azman’s election was deemed illegitimate by a majority of the local Chabad rabbis, who represented the Federation of Jewish Communities, the region’s largest Jewish group. Secular Jewish leaders from local cities and towns joined in protesting the vote.

Bleich never gave up his title and remained active in the country. A Kyiv weekly magazine, Focus, named Bleich and Rabbi Shmuel Kamenetzky, the chief rabbi of Ukraine’s Dnepropetrovsk Jewish community, among the 15 most “powerful foreigners” in the country in 2008.

That same year, the Karlin-Stolin Hasidic sect disavowed Bleich amid an internal power battle over the community’s institutions in Ukraine.

Bleich also held other communal leadership positions. He served as an executive member of the World Jewish Congress until the summer of 2021, and vice president of the European Council of Jewish Communities. Bleich lost some of his communal positions in 2019 following sexual abuse allegations, according to the blog Frum Follies. In the 2019 presidential election, he backed former President Petro Poroshenko who was defeated by Zelenskyy.

In the previous conflict between Russia and Ukraine in 2014, Bleich accused the Kremlin of staging antisemitic “provocations” in Crimea and compared Russia’s behavior to that of the Nazis prior to the Anschluss invasion of Austria in 1938.

During that conflict, Azman founded a village for Jewish families displaced by Russia’s five-year war against Ukraine in the eastern Donbass region. He named it Anatevka, after the village from “Fiddler on the Roof.”.

Azman is head of the Anatevka Jewish Refugee Community and appointed to his organization Lev Parnas and Igor Fruman, two associates of former New York City Mayor Rudy Giuliani. Parnas and Fruman were indicted in 2019 on campaign finance charges related to their efforts to remove Marie Yovanovitch, the former U.S. ambassador to Ukraine, from her job. Azman also appointed Giuliani as the “honorary mayor of Anatevka.”

On Jan. 6, 2021, Azman appeared to back the insurrection of the U.S. Capitol, comparing the situation to the 2014 ouster of Ukraine’s pro-Russia president and saying: “The people protesting against mass election fraud broke into the capital. God bless America.” Bleich downplayed it, saying Azman didn’t voice the opinion of Ukrainian Jews.

In recent days, both Azman and Bleich have been quoted in the media and described as chief rabbi of Ukraine. Eighteen years after his election was disputed, it seems that Azman – putting his life at risk – has solidified his standing as the country’s chief rabbi.