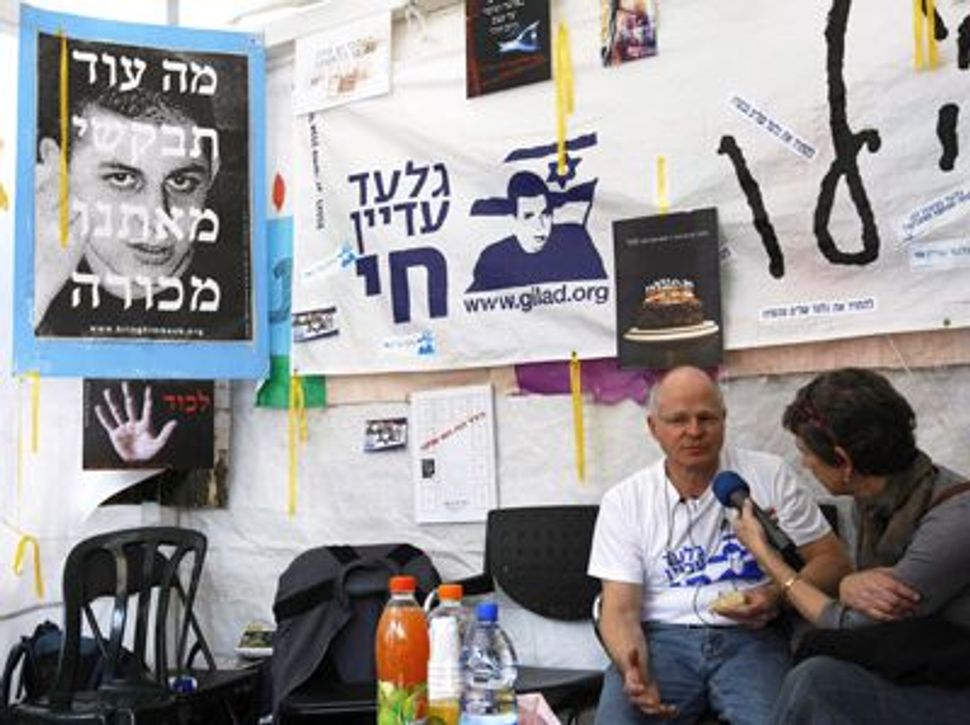 They have come by the thousands — first-grade classes, families from the North, government ministers, rabbis, even tourists. 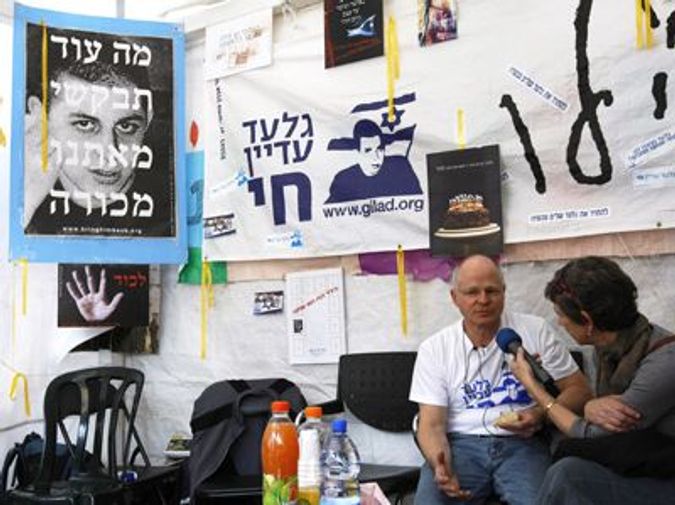 The Shalits hoped their presence would put pressure on the government to cinch a deal with Hamas for a prisoner swap that finally would bring home their son nearly 1,000 days since he was captured in a cross-border raid and spirited into Gaza.

“It’s pretty surprising because we did not expect so many people to come,” Noam Shalit, the captive soldier’s father, told JTA. “They have come to give their support and show their solidarity with us, and we were taken aback. We undertook this as a test of the public but never imagined this kind of turnout.”

“It helps us cope,” he said, “but it also, I assume, is getting attention for us in higher places.”

In what has felt like a national emotional roller-coaster ride, anticipation in Israel for a deal to release Shalit had grown in the waning days of Prime Minister Ehud Olmert’s administration. But by Tuesday, an 11th-hour agreement with Hamas appeared to have fallen through. Olmert in a television address to the nation delivered the disappointing news at a special news conference on Tuesday evening.

“The government’s ministers heard an expanded and detailed report from Shin Bet chief Yuval Diskin and Ofer Dekel, my personal envoy on the matter of prisoner exchanges,” Olmert said. “All government ministers accepted the position of the envoys, namely that the demands of Hamas as they stand do not allow us to go on with the deal.”

Israeli officials said Hamas was emboldened by the recent groundswell of public support for a Shalit deal and had hardened its demands. Hamas demanded the release of some 450 Palestinian prisoners, among them masterminds of suicide bombings that killed dozens of Israelis.

“We will not agree to release prisoners other than the hundreds we already agreed to,” Olmert said.

While the Cabinet voted against the deal, a poll by the Dahaf Polling Institute found that 69 percent of Israelis surveyed favored a deal to get back Shalit even if it would include the release “of hundreds of terrorist-murderers and the deportation of some of them to outside Palestinian Authority territory.”

Twenty-two percent said they were against such an agreement. Voices against a swap have come mainly from relatives of terror victims. Some bereaved families even staged a counter-protest across from the Shalit tent in Jerusalem.

Last summer, when Israel released Arab prisoners, including terrorists, for the bodies of two soldiers killed in the 2006 Israel-Hezbollah war, many Israelis criticized Olmert for cutting a deal that only would encourage Israel’s enemies to kidnap more soldiers and raise their ransom demands. At the time, many commentators said Shalit would suffer, as Hamas ratcheted up the price of his release.

Noam Shalit, a quiet, thoughtful engineer who reluctantly has become an international figure in the battle for his son’s freedom, sent a letter to Olmert on Tuesday once it became apparent that the latest indirect negotiations with Hamas had collapsed.

He has said he fears that the incoming government under Prime Minister-designate Benjamin Netanyahu will likely to take a harder line against a deal.

“I request unambiguously and publicly from you, and despite the steep price this requires: Bring back my son before the end of your term in office,” Shalit wrote Olmert. “This letter of mine is a prayer to save my son. I ask you father to father – Don’t abandon my son Gilad.”

The Shalits’ plight resonates deeply in Israel, where there is a mandatory draft for Jewish citizens and the army generally embraces the ethos that no soldier is to be abandoned in the field.

Among those who have visited the Shalits in their protest tent were the wife and daughter of Ron Arad, the Israeli airman who bailed out over Lebanon in 1986. He survived the bailout and was confirmed alive about a year and a half after his capture, but contact eventually was lost and his fate remains a mystery.

His example is seen as a cautionary tale in Israel. One of the slogans publicized by the grass-roots movement for Shalit’s release has been “Gilad is still alive.”

Veteran Israeli commentator Nahum Barnea wrote in Tuesday’s Yediot Achronot of Israel’s bad choices in the Shalit scenario: “Either risk the chance of Gilad Shalit’s fate being the fate of Ron Arad, or risk the awful security damage that will be wrought by those dangerous prisoners once they are released.”

At the protest tent last week, Noam Shalit patiently shook hands with the steady stream of supporters, posing for photos and trying to smile when offered blessings.

“We are with you all of the time,” said Livia Shalit (no relation), 64, of the Tel Aviv suburb of Kfar Saba. “We decided we could just not sit at home anymore.”

Another woman pressed his hand and said, “I am a Holocaust survivor. Gilad has become a son for all of us.”

A towering wall of poster board set up next to the tent features messages for Gilad Shalit on colored note paper.

“We love and miss you,” reads one. And another: “Come home.”