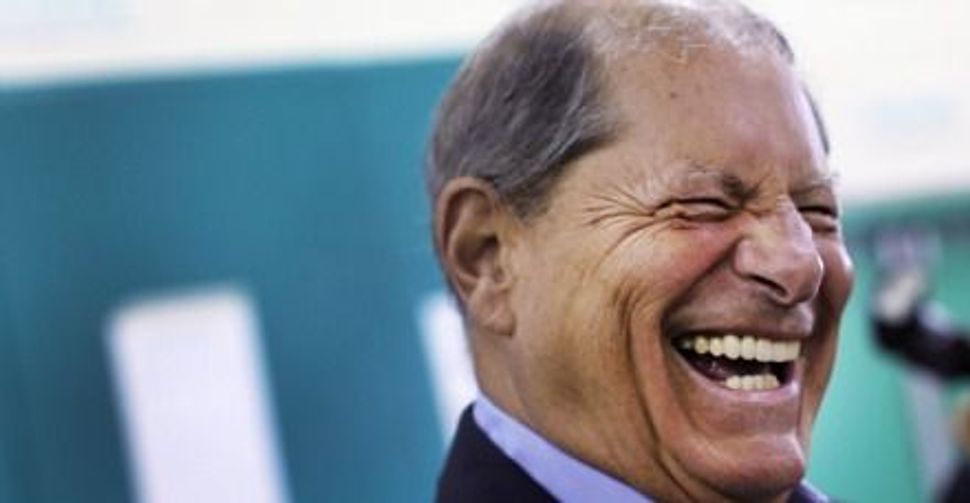 The Republican candidate, Bob Turner, beat his Democratic opponent, New York State Assemblyman David Weprin, in Tuesday’s special election. The Associated Press called the race for Turner shortly after midnight, with the Republican leading Weprin by a margin of 53 percent to 47 percent and more than three-fifths of precincts reporting.

The race was closely watched as a measure of attitudes toward Obama, with the Jewish vote a particular focus of attention. Former New York City mayor Ed Koch, a Democrat, urged voters to support Turner in order to send a message of dissatisfaction to President Obama over his policies toward Israel.

Weprin, an Orthodox Jew, initially led in pre-election polls. But Turner, a retired television executive who was a creator of “The Jerry Springer Show,” pulled ahead during the past month.

Turner’s victory came despite the Democrats’ strong advantage in voter registration in the middle-class Brooklyn and Queens district, which is 57 percent Democratic and only 19 percent Republican. Observers, however, have noted that the district votes more conservative than the registration numbers seem to suggest.

The Republican’s tenure in Congress, however, could be short-lived. New York state is losing two congressional seats due to decennial reapportionment, and many expect that the seat, which has been vacant since Weiner’s scandal-induced resignation, will be eliminated.

New York’s 9th Congressional District has the fourth-largest Jewish population of any congressional district, with some 173,000 Jews, according to a 2009 report from the Mandell L. Berman Institute-North American Jewish Data Bank. Jerry Skurnik, a partner at the political consulting firm Prime New York, told The New York Times that about a third of the district’s active voters are Jewish.

However, the district’s Jewish demographics are somewhat atypical, with sizable concentrations of Orthodox Jews and Russian Jews, who tend to lean more conservative in their voting behavior than Jews in general.

During the race Weprin tried to distance himself from the president, highlighting his criticisms of the president’s policies toward Israel.

While the Israel issue has garnered much of the media attention, in the Siena poll only 16 percent of the district’s Jewish voters said that a candidate’s Israel stance would be the most important factor in determining their vote. That is roughly half the proportion (30 percent) who identified the candidate’s position on the economic recovery as their key issue and slightly fewer than the proportion (20 percent) who chose Social Security, Medicare and other entitlement programs as the top issue.