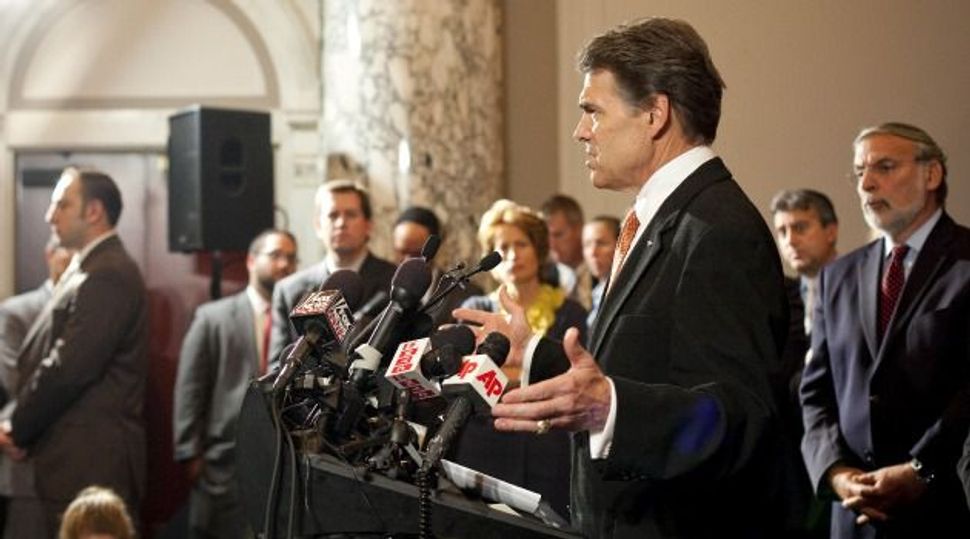 Texas governor and Republican frontrunner Rick Perry was the star of Tuesday’s press conference of politicians opposing the bid for Palestinian statehood and expressing their support for Israel.

The national media followed Perry’s strong statements regarding the upcoming U.N. vote, opposing settlement freeze, and above all, blaming President Barack Obama for the diplomatic mess Israel and the U.S. are in.

But while the cameras followed Perry, it was his Israeli counterpart that was facing a tougher job. Likud MK Danny Danon, who is also the deputy speaker of the Knesset, took the stage after Perry and tried to walk the thin line that separates attending a rally of Israel supporters from endorsing a political candidate in a foreign country.

Danon, though young and relatively new to politics, knew where to draw the line. He called on President Obama to punish the Palestinians for taking unilateral steps, but this is no more than the President’s fellow Democrats have been doing for months. Danon showered praise over Rick Perry, and even extended an invitation to him to speak at the Knesset, but made clear that nothing was done in a political context. “It is important to have friends like Governor Perry,” he said.

Flanking Perry on the other side of the podium was newly elected congressman Bob Turner, the politician who became a symbol of the Republican belief that Jewish votes are up for grabs because of Obama’s Israel policy. “I think it is definitely true,” Turner told the Forward as he left the event, “if the president doesn’t change his policy, Jewish voters will definitely change sides.”