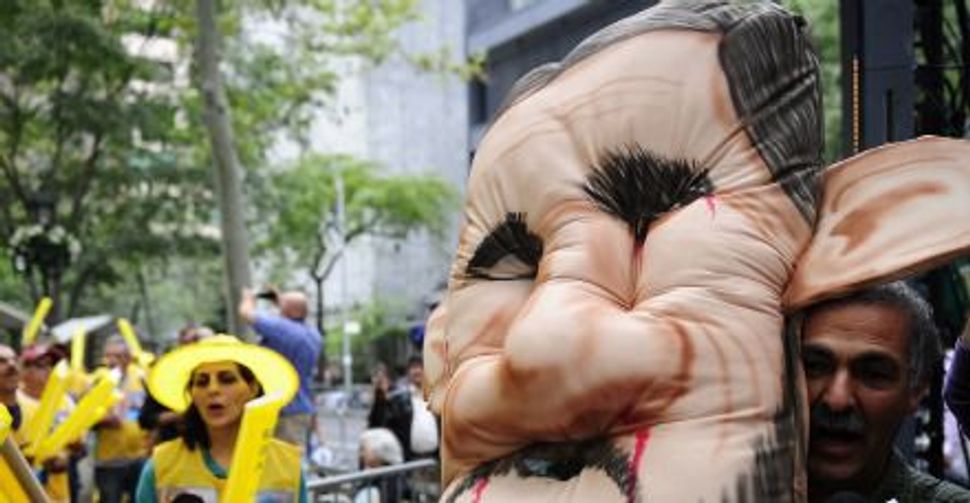 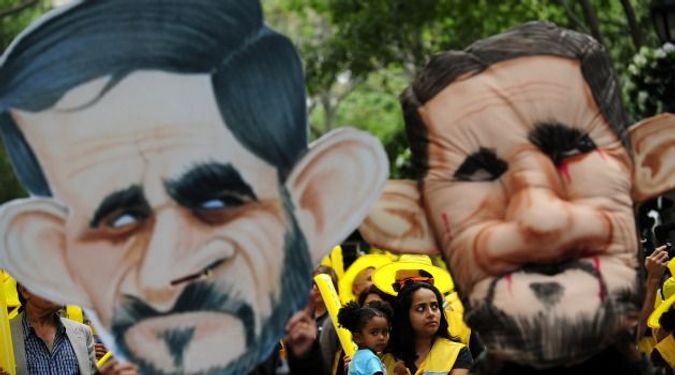 No to Hate Speech: Protesters carry caricatures of Iran?s President Mahmoud Ahmadinejad, who addressed the U.N. Inside, there were plenty of empty seats at a controversial conference on racism. Image by Getty Images

KEEP UP WITH THE FORWARD’S COMPLETE COVERAGE OF THIS WEEK’S DRAMATIC EVENTS AT THE UNITED NATIONS. SCROLL DOWN TO READ OLDER POSTS IN FULL.

CLICK HERE FOR A FULL RECAP OF YESTERDAY’S BREAKING NEWS

Durban Conference on Racism Hit by Protests and Boycott

The much anticipated U.N. event marking the tenth anniversary of the Durban Conference against racism was more about the empty seats than the ones that were occupied.

For the U.N. organizers, it was one of the key events of this years’ gathering and as such it was hosted by Secretary General Ban Ki Moon and given the General Assembly main hall as a venue. But the conference drew little attention inside the U.N. and was overshadowed by discussions regarding the Palestinian issue.

The U.S., Canada, Israel and most Western European nations boycotted the event, as they did in the previous follow up meeting convened in 2009. For Israel and its supporters, this meant success. With at least a dozen seats left empty, the Durban process has lost its legitimacy and the conference which became synonymous with criticism of the Jewish state, was sidelined. Secretary Ban tried to focus on the advance made in the past decade in fighting racism, but also spoke of the controversy the Durban process created because of its focus on Israel. “This process is meant to further the world’s essential fight against racism,” Ban said. “We should condemn anyone who uses this platform to subvert that effort with inflammatory rhetoric, baseless assertions and hateful speech.”

But while inside the U.N. headquarters celebrations of the Durban anniversary drew little attention, across the road, in the Dag Hammarskjöld plaza, the event stirred high emotions.

A colorful and noisy gathering, organized by a group called Iran 180, tied together the Durban event with the speech of Iranian President Mahmoud Ahmadinejad who spoke from the U.N podium at the same time. The group, made up of 33 NGOs, staged what they described as “street theater” which included a mock wedding of Ahmadinejad with Syria’s dictator Bashar Assad and a nuclear missile attached to a ticking clock. Several hundreds of participants who came to the protest were given colorful clown wigs and red noses, presumably to demonstrate how the U.N. had become a circus.

Dershowitz repeated this message a short while earlier when he spoke at a day-long conference against the Durban conference organized by the Hudson Institute and Touro college. A day earlier B’nai B’rith also hosted a discussion on the same interest.

The high level activity of Jewish groups against commemorating the Durban conference was viewed by Israel as a flawed strategy. A senior diplomat said the Israeli foreign ministry had tried to convince Jewish organizations to maintain a low profile and to let the event go practically unnoticed. The diplomat said Israel believed protests would only give the conference attention it would otherwise not receive.

But the protests went ahead anyways, and despite early reluctance on behalf of the Israeli government, cabinet minister Yuli Edelstein attended one of the anti-Durban events.–Nathan Guttman

Iranian President Mahmoud Ahmadinejad attacked Western powers on Thursday for a catalogue of misdeeds, but his address to the United Nations failed to mention Tehran’s disputed nuclear program.

The U.S. delegation walked out when Ahmadinejad said “arrogant powers” threatened anyone who questioned the Holocaust and the Sept. 11 attacks on the United States with sanctions and military action. Other Western delegations soon made their exit.

Ahmadinejad made only a passing reference to the Palestinian issue which has overshadowed this year’s UN General Assembly and did not comment on the Palestinian plan to ask the UN Security Council to recognize their nascent state.

He accused the United States of using the “mysterious” Sept. 11, 2001, attacks as a pretext to launch wars on Iraq and Afghanistan. The United States and its allies “view Zionism as a sacred notion and ideology,” the Iranian leader said.

“By using their imperialistic media network which is under the influence of colonialism they threaten anyone who questions the Holocaust and the Sept. 11 event with sanctions and military actions,” he added.

Mark Kornblau, spokesman for the U.S. mission at the United Nations, condemned Ahmadinejad’s remarks.” “Mr Ahmadinejad had a chance to address his own people’s aspirations for freedom and dignity, but instead he again turned to abhorrent anti-Semitic slurs and despicable conspiracy theories,” Kornblau said in a statement.

“We would have to oppose any action at the UN Security Council including, if necessary, vetoing,” Ben Rhodes, the White House national security council spokesman, told reporters after Obama met Abbas in New York.

PLO diplomatic envoy to the U.S. Maen Rashid Erekat told Haaretz that the U.S. President “reiterated the commitment of the U.S. to the establishment of the Palestinian state, as part of the two-state solution, and stressed the position of the US that the UN is not the right venue to reach this goal.”

“President Abbas explained the Palestinian position – basically it’s what we’ve done in the past few months, each side explained his position,” he added.

Obama met Abbas at the Waldorf Astoria Hotel in New York on Wednesday on the sidelines of the UN General Assembly.

U.S. Secretary of State Hillary Clinton was due to hold separate talks with Abbas and Prime Minister Benjamin Netanyahu on Wednesday evening.

Dozens of Palestinians gathered outside Palestinian President Mahmoud Abbas’ office in Ramallah on Thursday, protesting U.S. President Barack Obama’s opposition to their bid to gain recognition of a Palestinian state in the United Nations.

The protesters held up anti-Obama signs, including one reading “Obama the hypocrite” and another claiming the American president is siding “with killers against victims.”

The demonstrations are being organized for Friday in Egypt, Tunisia and Libya, countries where uprisings have this year led to the toppling of long-standing rulers.

The activists planned to protest Obama’s address on Wednesday at UN General Assembly, which they termed disappointing and biased, Al Ahram said.

It was quite clear that U.S. President Barack Obama’s speech, which Foreign Minister Avigdor Lieberman said he “would sign with both hands,” would draw mixed reactions. Its failure to go into details about the Israeli-Palestinian issue was assumed to be due to a combination of re-election concerns and those of slipping Jewish support.

But the U.S. Jewish organizations provided varying – in some cases even polar – responses to the speech.

The National Jewish Democratic Council (NJDC), which recently launched a new website explaining Obama’s support for Israel, took the speech as an opportunity to claim that all the “political chatter” doubting the president’s support for Israel should be “put to bed once and for all.”

“As he has proven throughout his presidency, President Obama supports Israel and its people instinctively. Israel truly has no better friend in the world today,” NJDC leaders Marc Stanley and David Harris said in a joint statement Wednesday.

“On behalf of the National Jewish Democratic Council’s Board of Directors and leadership, we wish to express our thanks to President Barack Obama for passionately and eloquently standing up for Israel and the Jewish State’s security needs at the United Nations today,” they said.

The American Israel Public Affairs Committee (AIPAC) welcomed the speech. “AIPAC appreciates the President’s “unshakeable” commitment to Israel’s security and his clear statements outlining the daily dangers and strategic threats facing Israel. President Obama demonstrated his understanding of Israel’s legitimate requirements when he stated that the Jewish people – in their historic homeland – deserve recognition and normal relations with their neighbors,” the Jewish lobby said.

American Jewish Committee (AJC) Executive Director David Harris said “President Obama’s message was crystal clear that the only path to sustainable peace is direct Israeli-Palestinian peace talks, not what goes on in the corridors of the UN.”

The Conference of Presidents Chairman Richard Stone and Executive Vice Chairman Malcolm Hoenlein welcomed Obama’s comments at the opening session of the UN General Assembly in support of direct negotiations, and his rejection of solutions imposed by outside parties, unilateral moves, or one sided declarations at the United Nations.

“The President said that “the Jewish people have forged a successful state in their historic homeland” and that “Israel deserves recognition.” We specially note this formulation not only because it reaffirmed a historic truth but also because many in the hall he was addressing have sought to deny Israel’s ancient and constant connection to the land and others have refuse to recognize it as the Jewish State,” their statement continued.

“We hope that other leaders will listen to President Obama’s words and heed his warnings,” they said, adding, “Most of all, we hope that the automatic majority against Israel at the UN will come to consider the danger to that institution and to the cause of peace that results from a blanket acceptance of anti-Israel measures no matter how unjustified they may be.”

“He (Obama) understands that peace is a cooperative venture. It needs leaders, partners, supporters, witnesses, and principled advocates. No sustainable peace can be achieved alone,” said the Rabbi. “The path to peace is paved with compromise and cooperation, not unilateralism.”

But on the left side of the map, the disappointment was palpable.

DeLee called upon the U.S. President to use his time at the United Nations this week as an opportunity to bring the Israelis and Palestinians back to negotiations. “Only this can re-establish and re-assert U.S. credibility and re-inject hope for an end to this conflict,” she said.

J Street rejected the Palestinian UN bid, but its President Jeremy Ben-Ami said in a statement that Obama was right to say there is “no shortcut” to ending the Israeli-Palestinian conflict and that Obama must turn this “crisis” into “an opportunity to jumpstart meaningful diplomacy that yields results.”