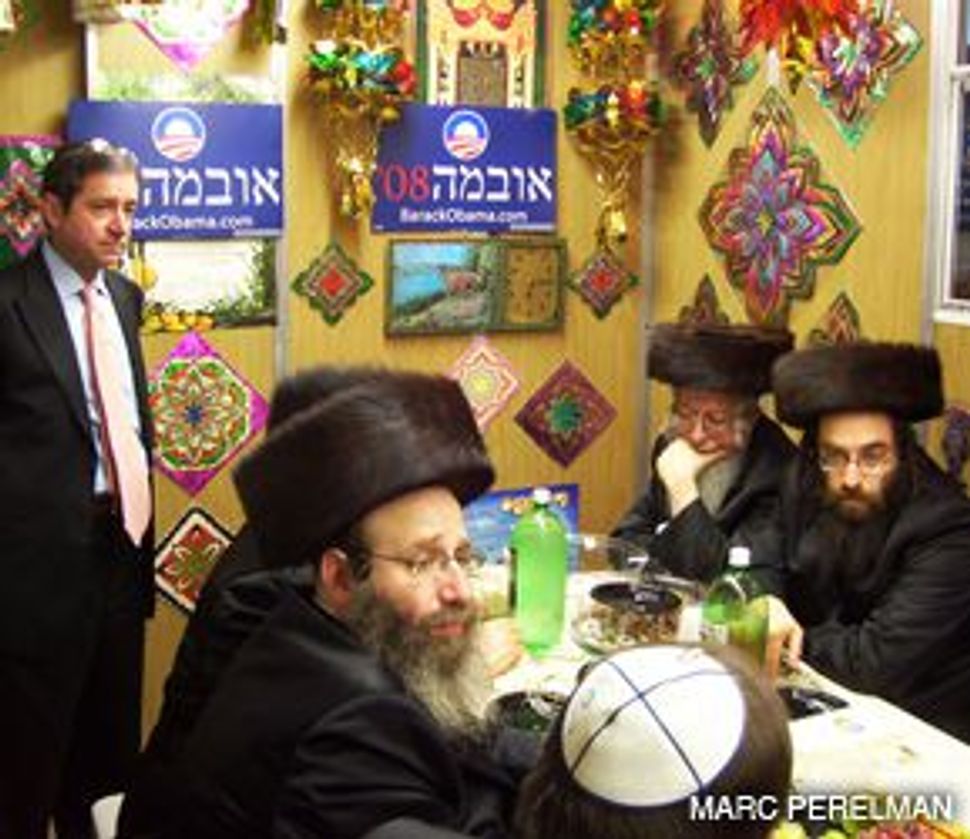 CAMPAIGN EVENT: Hasidim gathered in a Brooklyn Sukkah to hear Obama surrogates speak about the candidate.

The Obama campaign plunged into the heart of the ultra-Orthodox community at a Sukkot event hosted by a rabbi in the Williamsburg section of Brooklyn. 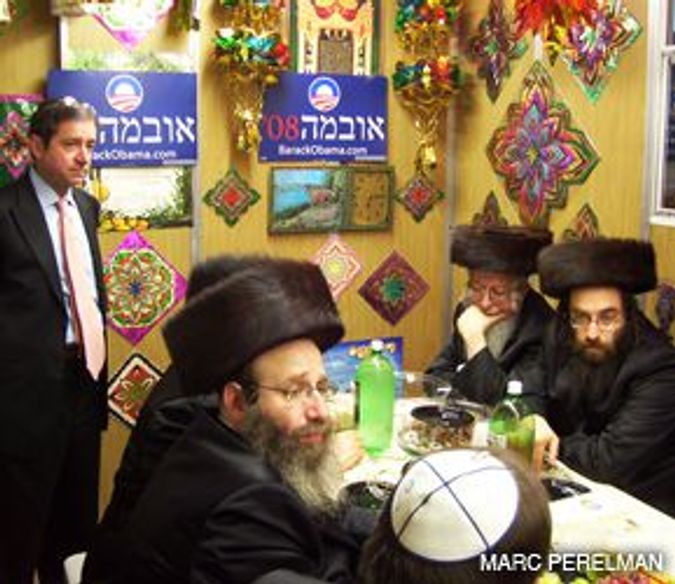 CAMPAIGN EVENT: Hasidim gathered in a Brooklyn Sukkah to hear Obama surrogates speak about the candidate.

Rep. Jerrold Nadler of New York, wearing a yarmulke with “my bubbe votes for Obama” written on it, spoke in a Sukkah with a delegation of rabbis and members from different ultra-Orthodox sects. As at most Jewish Obama events, Nadler spoke about Obama’s pro-Israel credentials, but his campaign also talked about social services, which are a key issue for the ultra-Orthodox community.

“Other more affluent communities have less social issues than we do,” said Rabbi David Niederman, head of the United Jewish Organization, a community-wide advocacy organization in Williamsburg. “But for people here, social services are really important.”

The Obama campaign was invited to speak by a variety of Brooklyn ultra-Orthodox groups and took place at a Sukkah outside the home of Joseph Menczer, a rabbi from the Pupa Hasidic sect.

Williamsburg is a stronghold of Hasidic Jews who trace their roots to Hungary, including the neighborhood’s dominant sect, the Satmar Hasidim. The Satmar community traditionally votes en bloc by following the recommendations of its leader. Since the death of its grand rabbi Moshe Teitelbaum, however, the community has been divided as two of his sons have feuded to take over leadership of the community.

One of the sons, Zalman Teitelbaum currently heads the Williamsburg-based branch, and the event took place before a Zalman-affiliated crowd. Another son, Aaron Teitelbaum leads the sect in the Borough Park neighborhood of Brooklyn and the enclave of Kiryas Joel, in upstate New York. The two camps split their endorsements in a state senate race earlier this year and it is still unclear who they will support in the presidential race.

Jeremy Goldberg, Obama’s Jewish outreach director for the tri-state area, told the Forward that the campaign had reached out to a variety of Hasidic communities, including the other main Satmar branch, and was working on holding similar events before the election.

“We firmly believe in trying to get every vote and that our platform resonates with everyone,” he said, adding that the campaign felt optimistic about getting support from the whole Satmar community.

Nadler focused his talk on foreign policy but the conversation quickly turned to social issues and what the Obama administration would do to ensure funding for education, healthcare and housing. Goldberg stressed that the Democratic presidential nominee had spelled out the importance of religious groups in education and vouched to make funding more transparent and accessible, especially for small religious organizations.

Niederman said that the community was waiting to hear from the McCain campaign and would then reach a decision, “through a vote.”

“We wanted to hear from them because there is an unknown aspect to this candidacy,” Niederman said. “The community leaders will get together and reach a decision.”