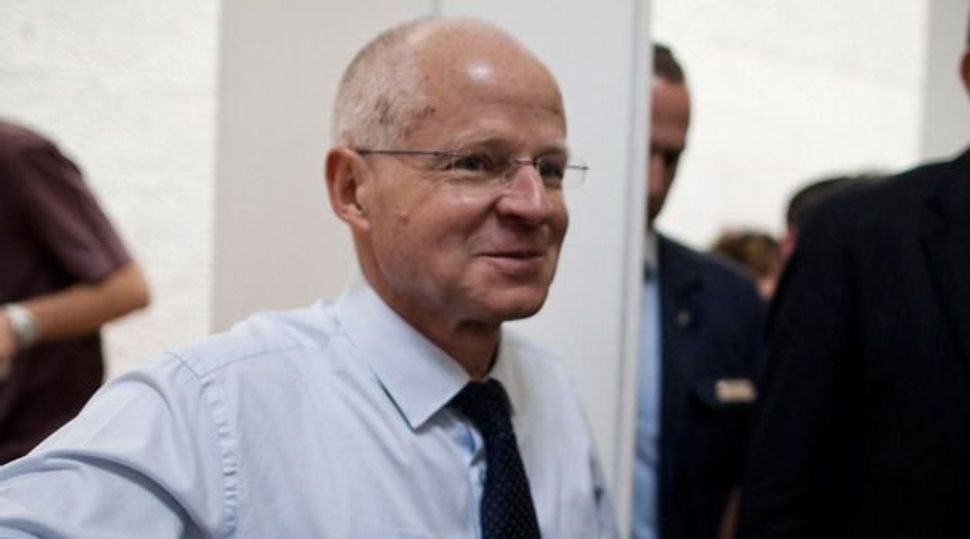 Only Hours to Go: Noam Shalit can look forward to the release of his son, Gilad Shalit, after the High Court cleared the way for a prisoner-swap deal to proceed. Image by Getty Images

The High Court of Justice rejected numerous petitions against the execution of the Gilad Shalit prisoner swap deal on Monday, effectively removing the last legal obstacle en route to the release of the abducted Israel Defense Forces solder.

Earlier Monday, Israelis opposed to the Shalit prisoner exchange deal asked the High Court to block the release of the jailed Palestinians in return for the captive soldier.

Four petitions were submitted to the court, filed by the Almagor Terror Victims Association and relatives of Israelis killed in Palestinian attacks. Judging from similar appeals in prisoner exchange deals in the past, however, the court is unlikely to intervene in what it considers a political and security issue.

During the hearing, Shvuel Schijveschuurder, a 27-year-old from Givat Shmuel who lost his parents and three of his siblings in the 2001 terror attack at the ?Sbarro? restaurant in Jerusalem, yelled at Gilad Shalit?s father Noam, who came as to court as a defender.

Schijveschuurder – who last week vandalized Yitzhak Rabin?s Tel Aviv memorial in protest of the Shalit deal – shouted: ?Hang a black flag over your home in Mitzpe Hila, this is a day of mourning.?

Bereaved family members disrupted the court session on numerous occasions, yelling out their objections to the deal, which is expected to get underway Tuesday morning.

Speaking following the court hearing, Schijveschuurder was beside himself with emotion, calling outside the courtroom: ?If the government can?t carry out a ?price tag? I?ll carry it out myself.?

?We will not let the terrorists leave Israel?s borders. If the court can?t carry out a ?price tag? then I have the justification and the authority to seek that price tag, even from The Hague,? Schijveschuurder said.

?It?s a tough deal. We would have been happy if Gilad had been freed in other way, but unfortunately the State of Israel has not been able to create the kind of pressure that would bring about his release,? he added.

?I regret the fact that the bereaved families were not with us when we were trying to pressure the Israeli government and Hamas, and top stop the trucks of money and goods [making their way into Gaza],? Gilad?s father said, adding: ?Not implementing the deal will not return the murdered loved ones, and, on the other hand, would sentence Gilad to death.

?Any delay, any displacement of a single detail in the deal, could seal his fate,? Shalit said.

Prior to Monday?s court hearing, Prime Minister Benjamin Netanyahu sent a letter to hundreds of families of terror victims.

In his letter, Netanyahu expressed understanding and empathy for the families, but stated that he is ?faced with the responsibility of the Prime Minister of Israel to bring home every soldier who is sent to protect our citizens.?