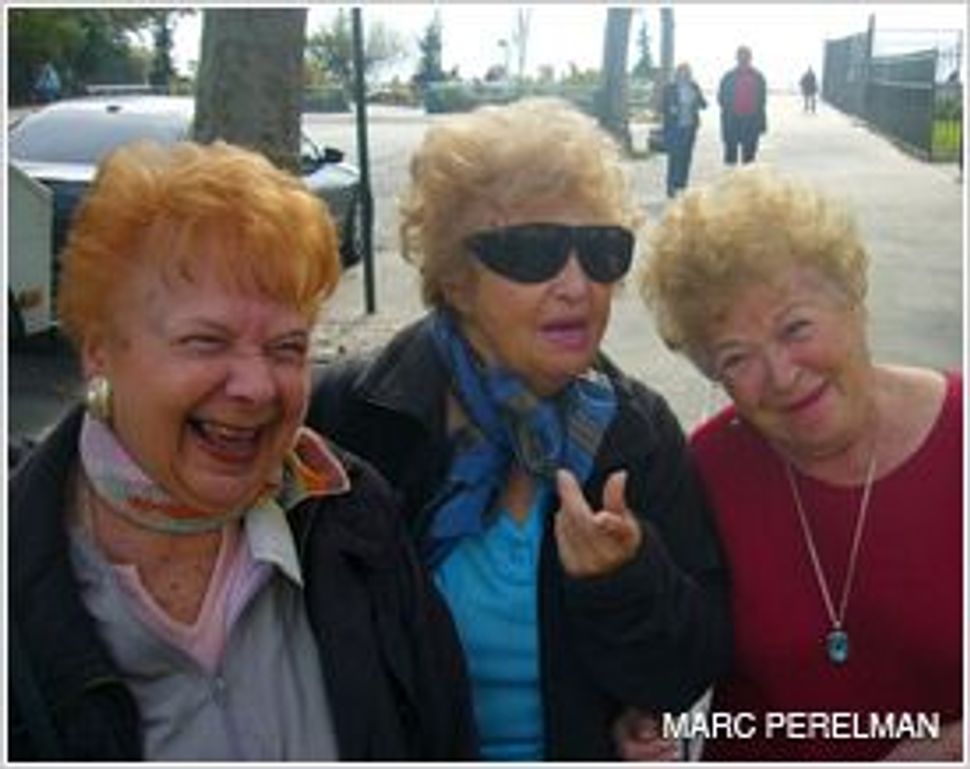 Our far-flung Election Day correspondents report from Jewish communities across the country — with dispatches from New York, New Jersey, Pennsylvania, Illinois and California.

ALEXANDRIA, Va. — The weekday morning minyan at Agudas Achim Congregation, a Conservative synagogue here, is usually a pretty small affair with 15 or so regular congregants. Yet this morning the parking lot was packed and Valley Drive and other nearby streets were lined with cars when Lynne and Donald Sandler arrived for the 7 a.m. service.

“The number of cars as we walked up was like the High Holidays,” Lynne Sandler said. “I thought it was a good sign.”

Scott Littky, the congregation’s education director, opened the doors for election officials at 4:40 a.m. Within five minutes a passing motorist stopped to ask him when voting began. By 5:15 a.m., a full 45 minutes before Virginia polling sites opened, the parking lot began to fill in and voters began lining up.

“Most times when I open the building, I’m able to vote and fall back asleep,” Littky said.

“I was changing my mind every day,” Ciment said, while pushing her 2-year-old son, Gideon, in a stroller. “I had to decide who was best for Israel, who was best for our country, security, taxes.”

It wasn’t until she stepped into the booth that she made up her mind, she said, but she declined to say whether her down-to-the-wire vote went to McCain or Obama. Her husband, however, had no problem committing to a candidate.

“I voted for McCain,” said. Jason Ciment, 39, owner of a web-design business. He added that he did not attempt to sway his undecided wife toward his position.

“In marriage, you pick your battles,” he quipped. And while Sari Ciment wouldn’t reveal her vote for president, she added, glancing over at her husband: “I’ll tell him later.”

BROOKLYN, N.Y. — “We’re the only Americans here,” snapped Bernice Pfugl, bantering in a thick Brooklyn accent as she stood with friends outside the Shorefront Senior Center near Brighton Beach’s fabled boardwalk, a center of the Russian-Jewish émigré community. Not only was Pfugl one of the few non-Russian speakers at the polling place, she was also one of the few Obama supporters.

This is McCain country, one of few such spots in overwhelmingly blue New York City.

Why McCain? Well, he is “experienced,” and Obama “speaks a lot,” Nelly and Michael Bershatskaia explained in Yiddish as they emerged from the polls.

Ilena Gindes, speaking in English with an accent from her native Ukraine, said, “We come from the U.S.S.R., and we know what socialism is, and we don’t want to see it happen again.”

Another voter emerged. His choice? “McCain,” he answered. Why? He tugged his black shirt and muttered “Obama black” before his wife pulled him away.

Betty Leibowitz, a lifelong Democrat, made no bones about her feelings: “Obama has the black masses behind him. McCain is all-American, and Obama is not.”

Pfugl, the Obama supporter, did not let that go unchallenged. “You’re talking nonsense. And what about Sarah Palin?” she shot back as she rolled her eyes.

“Well, Palin’s grandparents are Jewish. I read in the Russian paper that they had found their burial place in Lithuania,” Leibowitz responded.

PHILADELPHIA, Pa. — Wearing a “Pennsylvania for Obama” button on his left lapel, a Hebrew “Barack Obama ‘08” button on his right lapel, and a broad grin on his face, Burt Siegel looked like a liberated man.

The day before the election, Siegel, 65, retired as executive director of the Philadelphia Jewish Community Relations Council, a job that required him to be strictly nonpartisan. Now, with Election Day as his first day of political freedom, he had come in to volunteer at the Obama headquarters in northeast Philadelphia, where he was dispatching cars to drive elderly voters to the polls. The timing, he said, was not coincidental.

“I really wanted to do whatever I could to help the Obama campaign,” he said. “It wouldn’t have felt right to work today when I could have retired a day before.”

Siegel had worked for 35 years at the JCRC, where he worked closely with Republicans and Democrats and had to keep a low partisan profile. As the executive director for the last dozen years, his political profile was non-existent.

“I chose this career and I loved it,” he said. Even so, “It was frustrating. I came from a very political family. I was politically involved from age 21 when I worked on the Johnson campaign.”

Siegel’s wife, Barbara, hasn’t faced the same constraints. In September she organized an event for older Jewish women, “Bubbes for Barack,” in the Siegels’ living room. But even Barbara chafed at some of the restrictions, such as when Burt told her they couldn’t put up lawn signs.

“She’d say, ‘I live here too. I own half the lawn,’” Siegel recalled, chuckling.

But this weekend, a day early Siegel confessed, they broke the taboo.

A previous version of this story reported the statement of an Obama volunteer that a New York JCRC executive had been involved in the Obama campaign. That statement proved erroneous and was quickly removed.

Jewish Surrogates of a Familial Sort

As in the presidential contest, it was a match-up between youth and experience. Schwartz, a two-term congresswoman, went with experience in the form of her mother-in-law, Rachel Schwartz, 82, who had traveled to the Philadelphia suburbs from Greenvale on New York’s Long Island. Kats, a Russian-Jewish immigrant to America, deployed youth: her 10-year-old daughter Alexandra.

The two surrogates faced off Tuesday morning at the Meadowbrook School, a polling place that is home turf for the younger Kats, who is in the fifth grade there. They amiably compared notes on their respective candidates.

“Where did Allyson Schwartz go?” asked the younger Kats.

“She left already. She voted. She’s not coming back,” replied the elder Schwartz.

“My mom is coming back,” Kats noted.

“The lines were too long. She’s coming back,” Kats explained.

The two campaigners, each bearing a stack of leaflets, offered a study in contrasting styles. Schwartz, a seasoned campaigner decked out in a T-shirt that said “Allyson Schwartz for Congress,” stood her ground and handed out leaflets to passersby, proudly adding: “That’s my daughter-in-law.”

Kats was energetic, but more easily distracted, taking periodic breaks to pat passing dogs, get a donut, talk to a friend or just walk around.

But Kats made an impression. One voter stopped to tell her, “I voted for your mom because you were very convincing in your arguments.” Kats grinned.

Schwartz shrugged and asked, “How do you compete with someone that age?”

BEVERLY HILLS, Calif. — At the polling station at Beth Jacob Congregation in Beverly Hills, 18 kindergarten students from Harkham Hillel Hebrew Academy lined up outside waiting for their chance to glimpse a real voting booth. It was practice, teacher Elana Gettinger explained, for a vote they were actually old enough to participate in: whether their class snack should be pretzels or crackers. That would come later in the day.

While the kids weren’t allowed to vote once inside the booth, they nevertheless were vocal about their candidates of choice. “I’m for Obama,” one feisty blonde 4-year-old yelled out, as a gaggle of girls surrounded her saying, “I’m for Obama, too!” Asked why she wanted to vote that way, Talia Sinclair responded: “Because my ima did.”

Another student, 4-year-old Leia Gluckman gave a slightly more mysterious answer about why she would choose the Democratic candidate. “Because McCain spoke lashon hara about Obama’s kids,” she said. When asked how McCain had done that, she replied, “I don’t know.”

A House of Soda, Divided

MONTVILLE, N.J. — Steve Sanders and his wife, Margaret, both have concerns about Barack Obama’s commitment to Israel, but that does not mean they are voting the same way. On Tuesday, Steve pulled the lever for John McCain, while Margaret went for Obama.

Steve Sanders worries that what he calls Obama’s “socialistic” tax plan would endanger the company that his grandfather, a Polish immigrant in the seltzer trade, started in 1925.

Margaret is an attorney who specializes in real estate law and said that she is “a one-issue voter in this election,” going for Obama because she fears that McCain will stack the Supreme Court with anti-abortion judges.

The Sanderses spoke in the offices of their Sea Breeze syrup factory, where the family produces Bosco Chocolate Syrup and Stewart’s Root Beer. The couple belongs to a Conservative synagogue here, and they say that many of their couple friends are split.

“We’re almost all split in a similar way, with the wives being Democrats and the husbands Republicans,” said Margaret of her friends.

Two of their children are voting for Obama, but their son Josh, who commutes from Manhattan to Montville every day and is poised to take over the business, was still undecided as of this afternoon.

“I think in the end I’ll go for Obama, because McCain’s old and I don’t trust Palin to lead the country,” Josh said. “Obama’s attitude toward Jews and Israel isn’t the best, but Palin’s might be the worst.”

A House of Worship and Voting

CHICAGO, Ill. — Only slight adjustments were needed to turn Lake Shore Synagogue here into a polling station. Voting machines were placed in front of old Torah scrolls showcased in the synagogue’s lobby, and kosher catering was brought in for the poll workers.

Located in one of Chicago’s older neighborhoods, the crowd at the polling station was mixed, but Jewish voters seemed to be the majority. As expected, all agreed that Chicago was Obama-land, at least for the Jewish voters.

“Thank God it’s so. I wouldn’t live in any other place,” said Laura Smith after casting her vote. “Tomorrow I’m going to be a very happy person.”

A number of Chicago Jews have served as Obama’s advocates in the Jewish community, vouching for his support for Israel and his long-standing ties with Jewish activists. 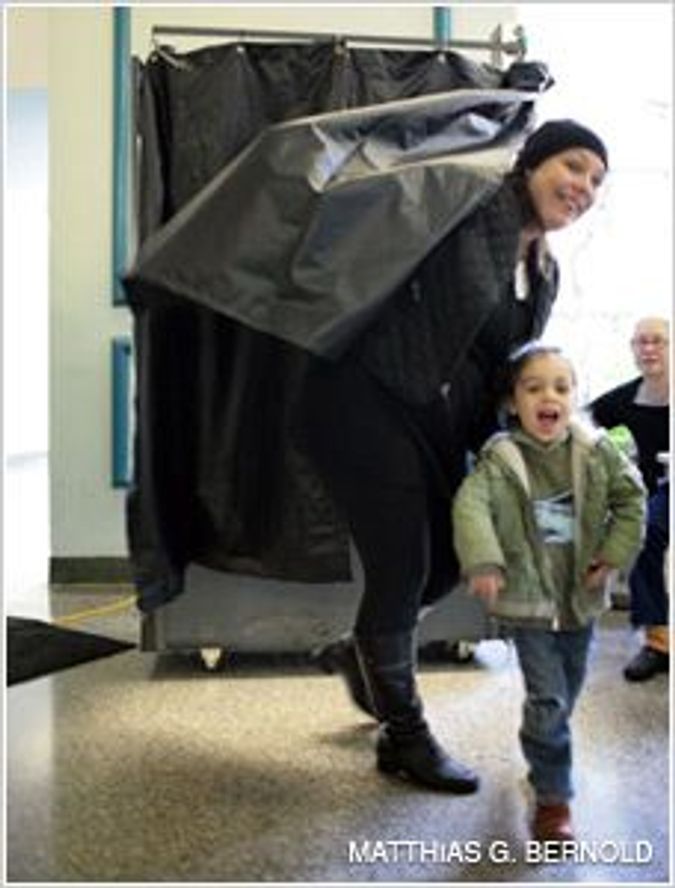 NEW YORK, N.Y. — Plen Safit, 38, entered a voting booth on Manhattan’s Lower East Side with her 4-year-old son, Yonatan, in tow, and cast her ballot for Barack Obama. It was the first time she had ever voted in an American election.

Safit, who is Dutch, just received American citizenship and described her first voting experience as “fantastic.”

Though she and her husband, a dual American-Israeli citizen, have lived in the United States for 10 years, she only decided to apply for citizenship after the 2004 election, when her frustration mounted over having no way to help John Kerry take the White House.

“I wanted to campaign, but I couldn’t vote,” she said. “It didn’t feel fair.”

Now Safit is teaching her son, who was born in America, to be excited about the political process. She said she talks to Yonatan about how Obama will make the world a safer place.

In mock elections at his school yesterday, Yonatan eagerly recounted how he circled Obama’s name on his card “because my mom likes him,” and piled it with the rest of the cards in his class.

“All my friends choosed Obama except one,” he boasted.