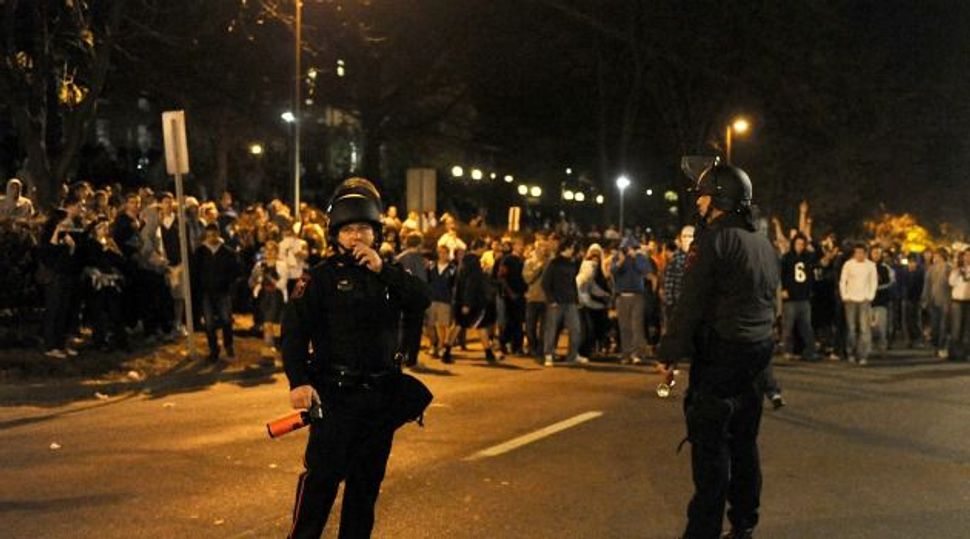 The president of Penn State, Graham Spanier, who is Jewish and according to The Daily Collegian was active at the Penn State Hillel, was also axed. He served as the university’s president for 16 years.

Thousands of Penn State students tore down lamp posts and battled with police after the board made the surprise announcement to ax the beloved coach universally known as “JoePa,” the New York Times reported.

A news van was overturned and police used Mace to subdue some students, some of whom were chanting, “Hell no, Joe won’t go,” the paper reported.

Paterno himself told ESPN that he accepted the board’s decision. He had earlier asserted he would remain at the helm of the Nittany LIons for the rest of the season, the New York Post said.

The violence erupted within minutes of the announcement that both Paterno and Penn State president Graham Spanier had been fired, effective immediately.

The board said it had to act to restore the reputation of the institution following the arrest on child sex abuse charges of Jerry Sandusky, a former longtime key assistant of Paterno. Sandusky, a former assistant football coach at the school who has been charged with sexually abusing eight boys over a 15-year span.

Two university officials face criminal charges for failing to inform authorities. Paterno did tell his bosses when a witness told him about one incident, which took place in a locker room, but did nit call police, news reports said.

Neither Spanier nor Paterno have been charged in the case, JTA reported.