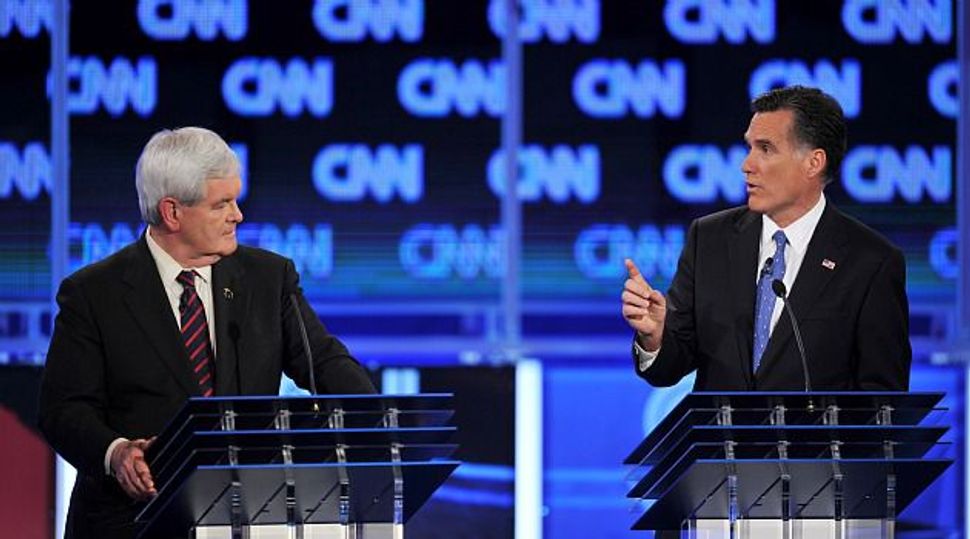 Sparring on Israel: Mitt Romney and Newt Gingrich both reacted strongly when a questioner asked them about the Palestinian people and the peace process. Image by getty images

Mitt Romney and former House Speaker Newt Gingrich both talked tough on Israel in their final debate before the make-or-break Florida primary on January 31.

Romney said on Thursday that the Palestinians are not interested in a two-state solution to the Arab-Israeli conflict, rather that they are interested in the elimination of the State of Israel.

The leading candidate in the race to become the Republican candidate for presidency was prompted by a question posed by a Palestinian-American Republican at a CNN-sponsored debate in Jacksonville, Florida on Thursday night.

“I believe the best way to have peace in the Middle East is not for us to vacillate and to appease, but is to say we stand with our friend Israel; we are committed to a Jewish state in Israel; we will not have an inch of difference between ourselves and our ally Israel,” he added.

Romney attacked President Barack Obama’s policy saying,”This president went before the United Nations and castigated Israel for building settlements. He said nothing about thousands of rockets being rained on Israel from the Gaza Strip.”

“This president threw Israel under the bus with regards to defining the ‘67 borders as the starting point of negotiations. I think he disrespected Prime Minister Benjamin Netanyahu, Bibi Netanyahu. I think he has time and time again shown distance from Israel, and that created, in my view, a greater sense of aggression on the part of the Palestinians,” Romney added.

Former Speaker of House Newt Gingrich, who was asked to comment on his statement calling Palestinians “an invented people,” stood by his controversial remarks.

“It was technically an invention of the late 1970s,” Gingrich explained. “Prior to that they were Arabs.”

He went on to talk about the issue of rocket fire from Gaza into Israel.

“There were 11 rockets fired into Israel in November. Now imagine in Duval County that 11 rockets hit from your neighbor. How many you’d be for a peace process and how many of you’d say, you know, that looks like an act of war?” he said.

The National Jewish Democratic Council accused Romney of deliberately misrepresenting Obama’s record, noting that he did condemn the rocket attacks.