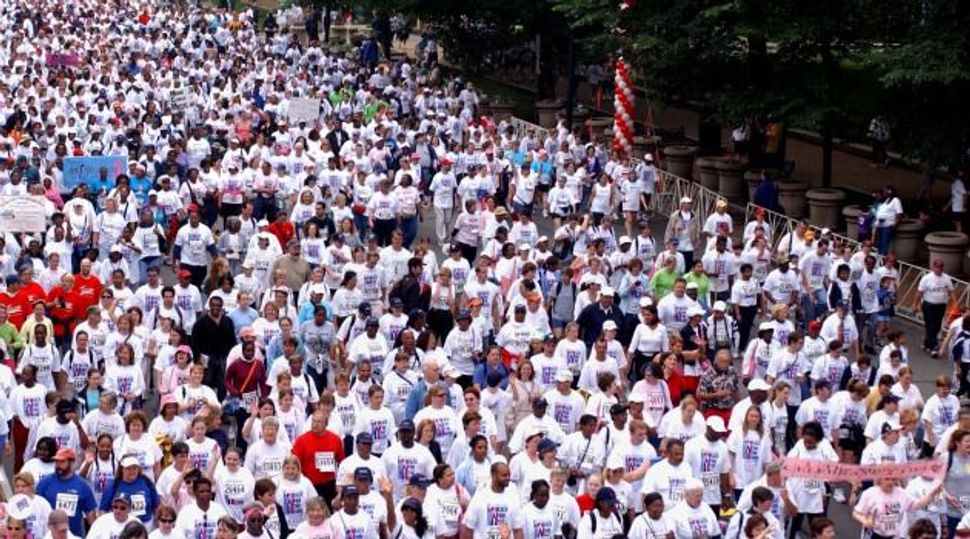 Back in the Race: Susan G. Komen for the Cure, the breast cancer group known for its mass races to raise money for awareness, backed down from its decision to stop funding screenings carried out by Planned Parenthood. Image by getty images

Susan G. Komen for the Cure has backed down from its decision not to fund Planned Parenthood.

In a statement posted Friday morning on its website, Komen’s founder and chief executive officer Nancy Brinkner said the organization was revising a rule that had earlier been used to disqualify Planned Parenthood from recieving a grant.

Read the Forward’s editorial calling on Susan G. Komen for the Cure to reverse its decision.

The original rule precluded grantees from getting funds if they were under federal investigation. Under the revised rule, the investigations must be “criminal and conclusive in nature and not political.”

Komen’s decision earlier in the week to defund Planned Parenthood had provoked a firestorm of outrage, including from many Jewish organizations that had earlier been partners and supporters of Komen, the world’s foremost breast cancer charity.

Critics charged that Komen, led by a Texas Republican, had bowed to anti-abortion political pressure, a charge Brinkner had earlier denied and which she repeated in her Friday statement.

“We have been distressed at the presumption that the changes made to our funding criteria were done for political reasons or to specifically penalize Planned Parenthood,” Brinkner said. “They were not. Our original desire was to fulfill our fiduciary duty to our donors by not funding grant applications made by organizations under investigation.”