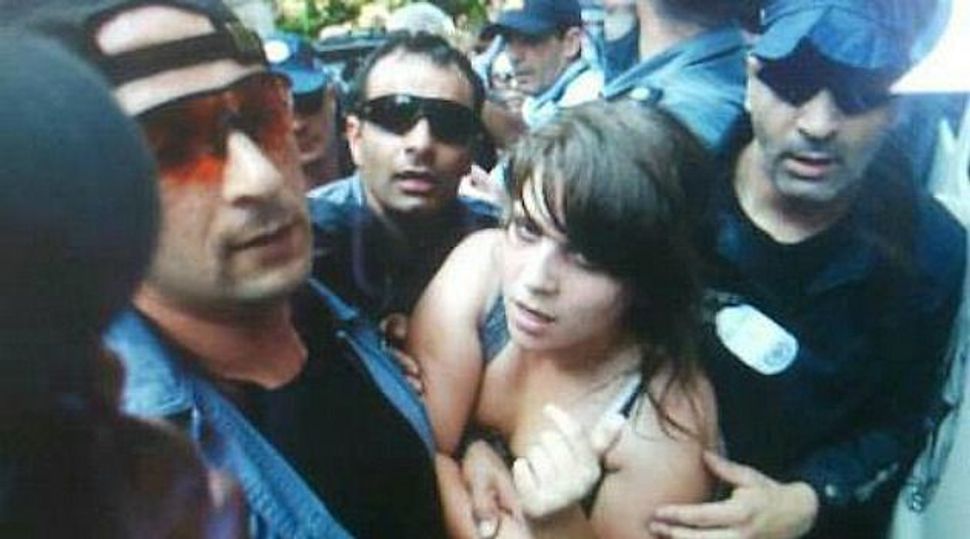 Don?t Forget: Police may be facing a summer of confrontation with social justice protesters. Image by facebook/daphni leef

Public Security Minister Yitzhak Aharonovitch should not be allowed to forget these pictures, nor should Police Commissioner Yohanan Danino or Tel Aviv Mayor Ron Huldai (a retired brigadier general): Five police special unit officers – maybe six – drag protest leader Daphne Leef out of a group of demonstrators on Rothschild Blvd. in Tel Aviv and onto the opposite sidewalk.

Leef, in a blue shirt, is thrown to the ground. A few meters away, municipal inspectors and Huldai’s “Green Patrol” help the police push back the protesters. Every few minutes Leef tries to raise her hands and protect herself from the shoves and kicks, to no avail.

In the background, the crowd repeatedly shouts one word: Democracy. This horrific sight lasted for many minutes, until Leef was forcefully taken to a nearby police vehicle. No one should ever ignore or repress these pictures.

If the prospect of a renewed summer social protest needed a little spark to get angry, raging Israelis back on the street, the police’s special unit officers and Huldai’s municipal inspectors generously provided just that; the disproportional use of force against Leef – one woman vs. five-six officers, and later against other protesters – tainted the events on Rotchild. The brutality from above was not only direct, it was public and unabashed.