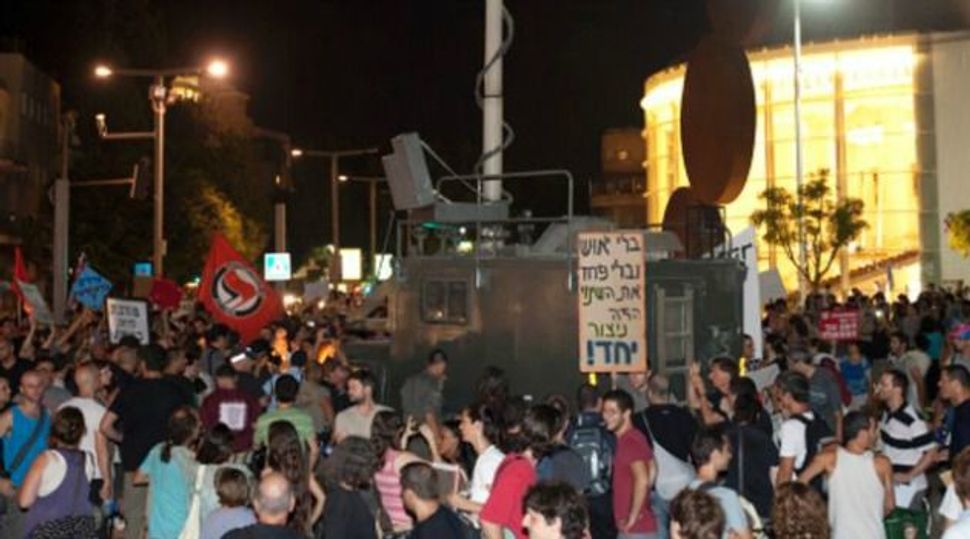 Equality for All: Thousands of Israelis demanded an end to preferential treatment for ultra-Orthodox Israelis in national service. Image by haaretz

Thousands of protesters marched in central Tel Aviv on Saturday to demand ultra-Orthodox and Arab sectors share the burden of military and civilian service.

Kadima leader Shaul Mofaz and his predecessor Tzipi Livni also attended the rally, as did “Yesh Atid” chairman Yair Lapid. According to Police estimates 20,000 persons arrived at the Museum Plaza.

According to Mofaz “A concerted effort was made to pass the bill into law. The findings of the Plesner Committee must be implemented. Towards Wednesday, we will have a bill ready to be voted into law. We must not allow this subject to fall out of public discourse. I came here to identify with all Israelis that serve and carry the burden.”

Former Shin Bet chief Yuval Diskin commented on Mofaz coming to the protest saying “It is shameful. It is like a tycoon coming to Dafni Leef’s [social] protests.”

Diskin said in the rally that “unfortunately, there are still people who think they should not bear the burden. We serve the state because it’s the land of our fathers, where our parents and we fought so our children can live here.”

Earlier on Saturday, Prime Minister Benjamin Netanyahu announced that he would debate the recommendations of the Plesner Committee, tasked with replacing the law governing Haredi enlistment, with his Likud faction on Sunday – after he disbanded the committee earlier this week.