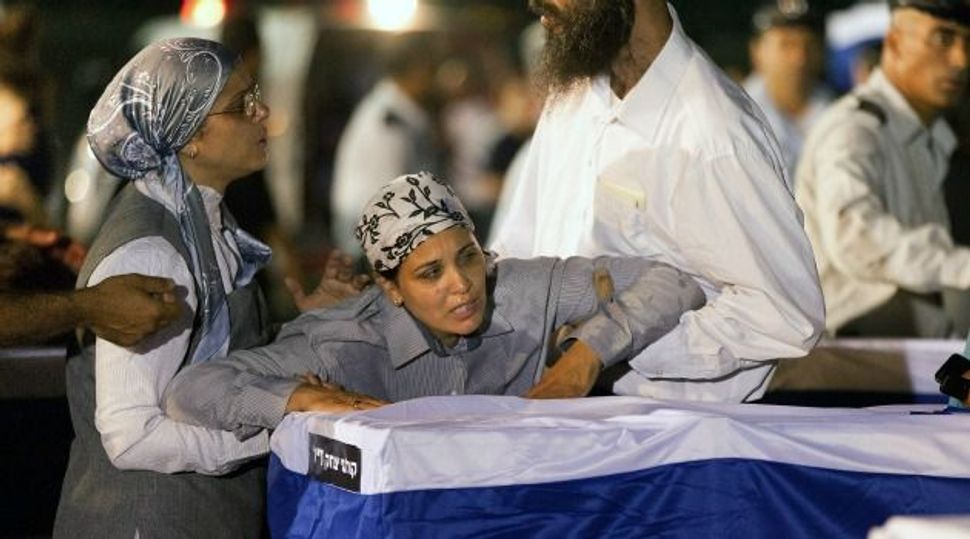 Hundreds of mourners attended the funeral on Friday morning, for Itzik Kolangi, 28, and Amir Menashe, 28, two of the victims of the terror attack in Bulgaria. Kolangi and Menashe were laid to rest at the Segula cemetery in Petah Tikvah, where they lived. The two men were traveling in Bulgaria with their wives, and both couples left small children home in Israel during their trip.

Dudu Kolnagi, Itzik’s brother, eulogized him during the funeral. “You are my etneral brother. I will never forget you. I promise that me and the family will always watch over your wife Gilat and your amazing daughter Noya, and she will be raised just as you wanted. Watch over us from above. We love you very much.

Itzik Kolnagi’s wife, Gilat, was seriously wounded during the attack, and was brought to Israel on Thursday by an Israel Air Force plane from Sofia, Bulgaria. The couple’s relatives said that Gilat was reluctant to leave their four-month-old daughter at home while on vacation. The family members added that apparently, the couple was loading luggage into the bus’s cargo hold as the terrorist detonated the bomb.

Shortly after Kolnagi’s funeral, his friend Amir Menashe will be buried. Amir’s wife, Natalie, was lightly wounded in the attack and arrived in Israel on Thursday together with other victims lightly or moderately wounded. The couple has a ten-month-old daughter. Natali arrived at the cemetery seated in a wheelchair.

Funerals were also held for Maor Harush, 25; Elior Priess, 26; and Kochava Shriki, 44, who was pregnant with her first child.

Seventeen injured Israelis are still hospitalized across the country after being flown back there by the Israel Defense Forces on Thursday, according to Ynet. Two of the injured remain seriously wounded, according to the news service.

United States and Israeli officials are blaming the Iranian-backed Lebanese group Hezbollah for Wednesday’s explosion outside Sarafovo Airport in Burgas.

Yair Maman, Kolengi’s brother-in-law, said at the funeral, “I cannot believe we are saying goodbye to you. The extent of the horror is indescribable – you went for a vacation and came back in a coffin,” Ynet reported.

Menashe’s wife, Natalie, was also injured in the attack. She arrived at the funeral in a wheelchair and kept saying, “Come back to me. I can’t live without you,” according to Ynet.

Kochava’s husband, Yitzhak, who was injured in the attack, searched for his wife for hours after being separated from her in the blast. “Only when I arrived in Israel did I realize she was killed. I was told the prime minister wanted to console us and that’s how I realized she didn’t survive,” he told Ynet.