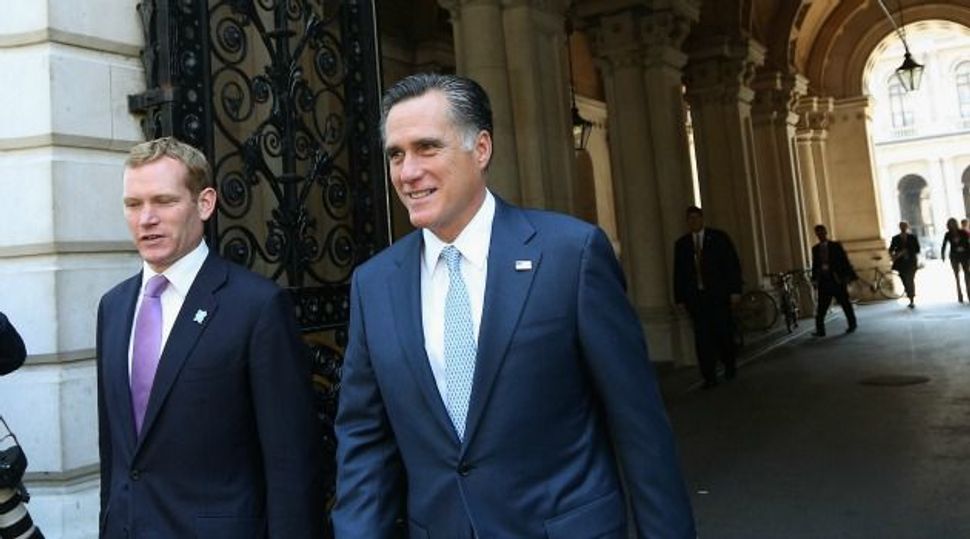 Get Out of Dodge: Mitt Romney was looking forward to getting out of Britain after he offended many with critical comments about the Olympics. Next stop: Tel Aviv. Image by getty images

Republican presidential hopeful, Mitt Romney, must wish he was already on the next stop of his foreign tour, in Jerusalem, where he will undoubtedly be getting better treatment than he has so far on his initial visit to London. So far, he has managed to offend his hosts by casting aspersions on their chances of pulling off a successful Olympic Games and been snubbed in turn by Prime Minister David Cameron, who met him in his office, but failed to greet him for a photo-opportunity at the famous door of 10 Downing Street.

Romney’s trip to Britain, Israel and Poland was designed to allow him to boost his foreign-policy credentials and bask in the Olympian glory, as the man who ten years ago, single-handedly saved the Winter Olympics in Salt Lake City. But it was this past success that caused him to put his foot in it, on Wednesday evening when in an interview with NBC, he was asked about the problems London has been having with training security staff and traffic congestion before the Games. “You know, it’s hard to know just how well it will turn out,” Romney answered. “There are a few things that were disconcerting, the stories about the – private security firm not having enough people – the supposed strike of the immigration and customs officials, that obviously is not something which is encouraging.”

Understandably, this was taken by the British as casting doubt on their capabilities as Olympic organizers and when Cameron was asked about this the next morning, he shot back that “we are holding an Olympic Games in one of the busiest, most active, bustling cities anywhere in the world. Of course it’s easier if you hold an Olympic Games in the middle of nowhere.” In other words, Romney had it made out in the Utah desert. Not something he should be taking too much credit for. And this was Romney whose aides have been saying can understand the British much better than Obama, because he is descended from Mormon converts in northern England and shares a joint Anglo-Saxon heritage.

Afterwards the two met, and despite previous speculation that Cameron would greet his guest outside, he was not at the door and the two were photographed only sitting inside. This time Romney was much more enthusiastic about London 2012, saying to reporters after the meeting that “I expect the games to be highly successful,” even saying that he himself had made mistakes when he was in charge of the Salt Lake City Games.