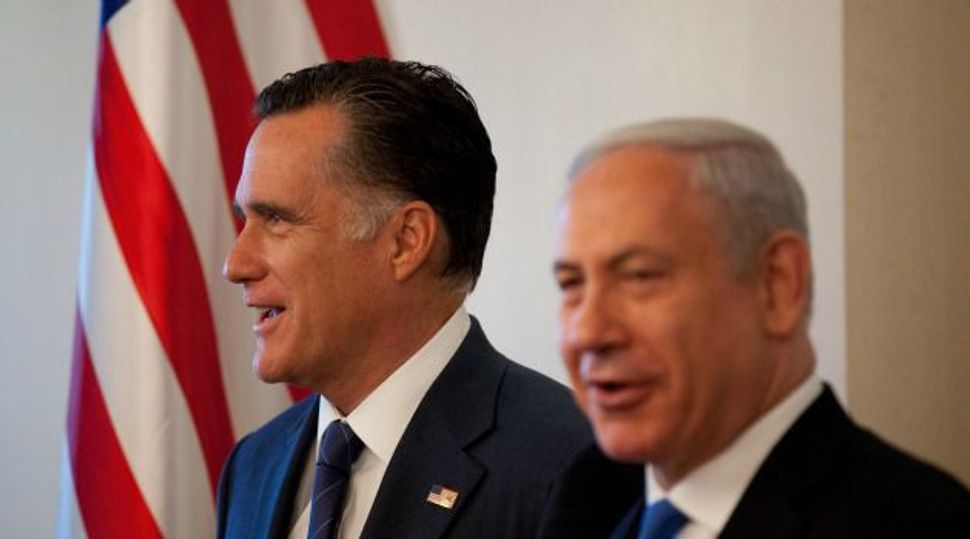 Mitt in Israel: Mitt Romney talked tough on Iran and affirmed the strong alliance with Israel. Image by getty images

Mitt Romney, the GOP presumptive presidential nominee, affirmed the strong alliance between the U.S. and Israel during meetings with Israeli Prime Minister Benjamin Netanyahu and President Shimon Peres in Jerusalem.

Romney arrived in Israel on Saturday night from London.

In the meetings, held Sunday morning in Jerusalem, Romney affirmed a strong alliance between the U.S. and Israel, and spoke of the threat a nuclear Iran would pose to both countries.

“As we face the challenges of an Iran seeking nuclear capability, we must draw upon our interests and our values to take them on a different course,” Romney said during his meeting with Netanyahu.

During his meeting with Peres, Romney said that the threat Iran “would pose to Israel, the region and the world is incomprehensible and unacceptable.”

Hours before Romney’s speech, his liaison to the Jewish community, Dan Senor, said that Romney, if elected, would support a unilateral Israeli strike on Iranian nuclear facilities.

“If Israel has to take action on its own, in order to stop Iran from developing the capability, the governor would respect that decision,” Senor said in a press briefing, according to the Associated Press.

Romney said that he saw special significance to his visiting Israel on the fast of the Ninth of Av, which commemorates the destruction of the First and Second Temples in Jerusalem. He called the day “a time of remembrance of many lives that have been lost to tragedy and terror.”

Netanyahu and Peres also spoke of the severity of the potential Iranian nuclear threat, and emphasized his appreciation for the U.S.’s bipartisan support of Israel.

I think it’s important to do everything in our power to prevent the Ayatollahs from possessing” nuclear capability, Netanyahu said. “We have to be honest and say that all the sanctions and diplomacy so far have not set back the Iranian program by one iota.”

In a public statement with Romney, Peres also criticized Iran and said that America and Israel should “declare that all options are on the table.”

He also called on the Arab League to solve the conflict in Syria, and said that Israel should push for peace with the Palestinians.

“Peace is the hopeful part of the storm” in the Middle East, Peres said. “We’d like to see two states for two peoples. We’ve come a long way. This should be completed.”

During his meeting with Peres, Romney also said that “our hope is to find a two-state solution.”

After leaving Peres, Romney met with Shaul Mofaz, the head of the centrist Kadima Party that broke away from Netanyahu’s governing coalition earlier this month. He is scheduled to meet with Palestinian Authority Prime Minister Salam Fayyad, and to deliver a policy address Sunday evening in Jerusalem.