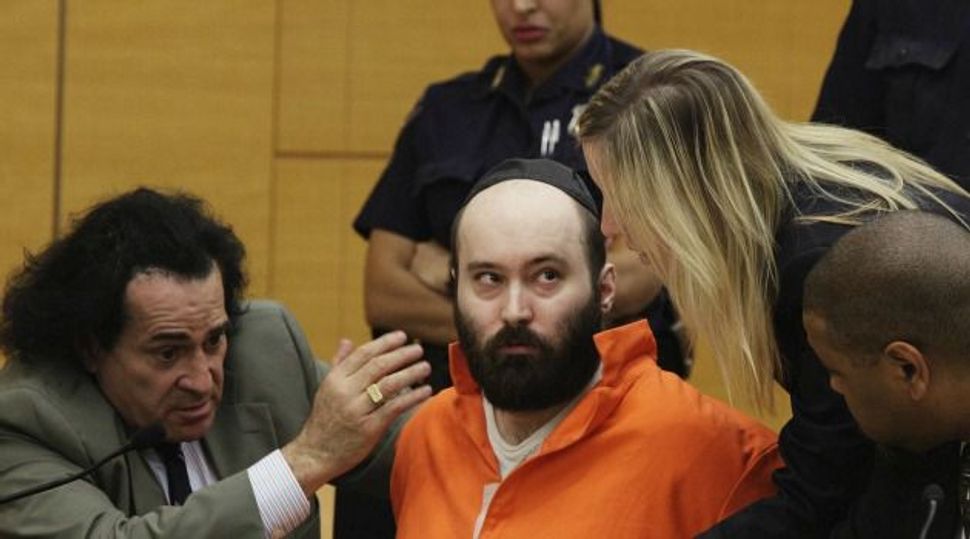 Brooklyn Beast: Levi Aron pleaded guilty to the murder of little Leiby Kletzky. He faces 40 years in prison under a deal with prosecutors. Image by Reuters/Pool photo

A Brooklyn man pleaded guilty on Thursday to murdering an 8-year-old Orthodox Jewish boy last year, dismembering his body and stashing the parts in his freezer and a suitcase tossed into a dumpster.

Levi Aron, 36, pleaded guilty to second-degree murder and second-degree kidnapping in the death of Leiby Kletzky, who had lost his way in the Hasidic neighborhood of Brooklyn, New York where they both lived.

“I panicked,” Aron told State Supreme Court Judge Neil Firetog when asked about the killing, which occurred after Aron saw posters of the missing boy plastered along the sidewalk.

Aron was charged with first-degree murder and kidnapping, and had faced life in prison, but he reached a plea deal with prosecutors under which he will get 40 years in prison with five years of supervised release when he is sentenced on Aug. 29.

Wearing a black yarmulke and dressed in an orange prison jumpsuit, his wrists handcuffed behind his back, Aron faced the judge in state Supreme Court in Brooklyn and answered his questions in a barely audible voice.

He acknowledged kidnapping the boy and, after seeing the missing child flyers, panicked, drugged him with prescription medicine and suffocated him with a towel. He then dismembered the body and police found some of the parts in a freezer in Aron’s apartment. Aron disposed of other body parts in a dumpster.

Kletzky went missing the first time he was allowed to walk home alone from a religious camp. He met Aron on the street and sought help from him after getting lost.

The boy’s family agreed to the plea deal to avoid reliving the crime through a trial, said Dov Hikind, an Orthodox Jewish state assemblyman who served as a spokesman for the family.

“A day doesn’t pass without thinking of Leiby, but today we close the door on this one aspect of our tragedy,” the boy’s father Nachman Kletzky said in a statement. “Closure does not mean we don’t continue to feel the pain.”

District Attorney Charles Hynes said the plea deal should allow the family and the community to begin healing.

“No one should ever forget what happened to Leiby Kletzky but we can all take solace that Levi Aron with never, ever be able to hurt anyone again,” Hynes said in a statement.

Aron’s lawyer said he was full of remorse. “He came in today to admit his guilt and to take responsibility for his actions… He’s very remorseful in his own way,” said his lawyer, Jennifer McCann.