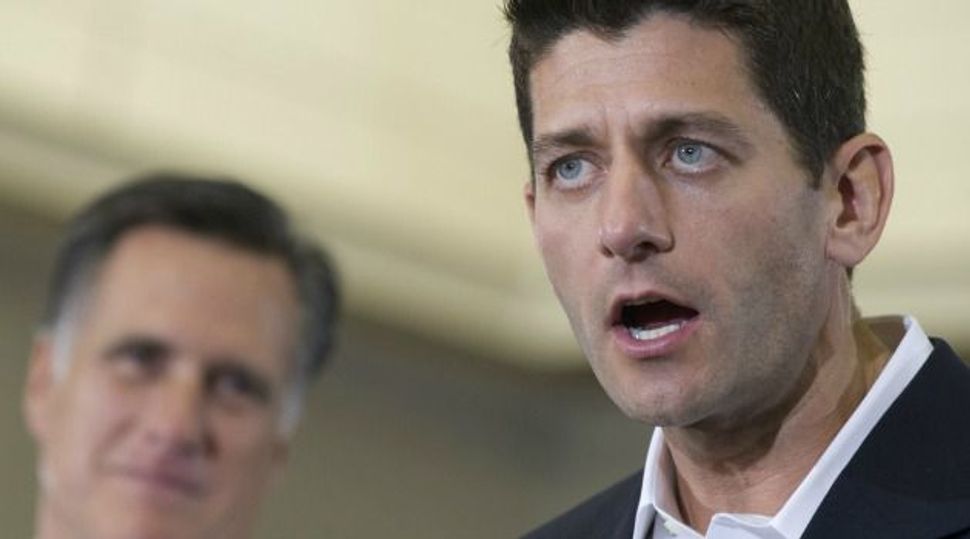 Controversial Pick: Jewish Republicans lined up behind Mitt Romney?s choice of Paul Ryan as running mate. But Democrats lashed out at his support of overhauls of social programs. Image by getty images

Rep. Ryan (R-Wis.), the chairman of the U.S. House of Representatives budget committee, has taken a lead role in the stand-off between the White House and the Democratic-led Senate on one side and the Republican-led House on the other, that has stymied passage of a budget.

“Paul Ryan has challenged both party leaderships in Washington to face up to growing fiscal problems that threaten to blight our nation’s future,” Matt Brooks, the director of the Republican Jewish Coalition, said Saturday after Romney, the presumptive GOP presidential nominee, presented Ryan as his vice presidential pick at a rally in Norfolk, Va. “And while congressional Republicans have responded to the challenge, Democrats have ducked responsibility.”

David Harris, the NJDC president, said in a statement that “Ryan’s signature budget plan drew the profound concern and even ire of many in the American Jewish community because of its plans to end Medicare as we know it, slash vital social safety net programs, and increase the burden on seniors, the middle class, and the poor.”

A broad array of Jewish groups have criticized elements of Ryan’s budget proposals, although without naming him.

The Jewish Council for Public Affairs, the Jewish public policy umbrella, the Reform movement and B’nai B’rith International have protested proposed GOP cuts to social safety net programs, including Medicaid, which provides medical coverage for the poor, and the Supplemental Nutrition Assistance Program, or SNAP, formerly known as food stamps.

The Jewish Federations of North America has this year maintained a low profile in the rancorous budget debate, and has not weighed in on Ryan’s proposals.

In 2011, however, JFNA was bluntly critical of plans that originated with Ryan to transition parts of Medicare, the medical program for the elderly, into a voucher program, and to convey Medicaid funds in block grants to the states, which reduces federal controls over how the money is spent.

“Within the current framework of Medicaid and Medicare, we believe that it is possible to restrain growth and rein in costs,” read the the April 2011 from JFNA and JCPA to Congress members. “We are capable of strengthening their long-term viability without a fundamental restructuring that turns Medicaid into a block grant or Medicare into a voucher program.”

Ryan, 42, is likely to help Romney, the former Masachusetts governor, in keeping the right wing of the party energized.

A close associate of House majority leader Rep. Eric Cantor (R-Va.), the most senior Jewish lawmaker in Congress, Ryan is a stalwart of budget and social policy hawks who are wary of Romney because of his reputation as a moderate.

Ryan also will be valuable to the campaign in his home state and in neighboring Michigan, both considered possible swing states.