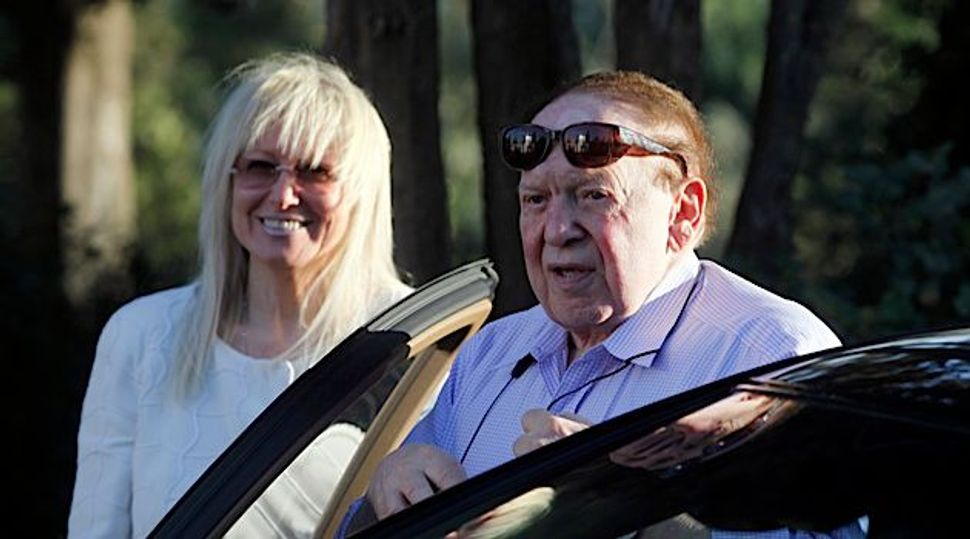 Casino mogul and philanthropist Sheldon Adelson and his wife have contributed to an independent super PAC to support the congressional candidacy of Rabbi Shmuley Boteach.

Adelson and his wife, Miriam, each gave $250,000 to a new independent super PAC, the Patriot Prosperity PAC, which is supporting Boteach’s New Jersey congressional run in a newly redrawn voting district against Democratic Rep Bill Pascrell, an eight-term incumbent, the Wall Street Journal reported late Monday, citing “people close to the Adelsons and the PAC.

The Adelsons previously have given directly to the Boteach campaign, according to the newspaper. Sheldon Adelson and Boteach are also personal friends, as well as mutual acquaintances with Israeli Prime Minister Benjamin Netanyahu, the newspaper reported.

Through political action committees, Adelson and his wife have funneled $10 million toward presumptive GOP presidential nominee Romney’s election effort, after spending an equal amount on the failed campaign of Newt Gingrich. Adelson has said he’s willing to spend up to $100 million to defeat Obama.

Adelson has given nearly $100 million to Birthright Israel, the program that brings Jews aged 18-26 to Israel for free. He gave a $25 million gift to the Yad Vashem Holocaust memorial in Jerusalem in 2006. From 2007-2009, he funded a $4.5 million strategic studies center in his name at the Shalem Center, a think tank in Jerusalem. His relatively smaller donations have helped bolster groups such as the Zionist Organization of America.

Boteach’s stated platform includes support for school vouchers, a flat tax and making marital counseling tax deductible in order to lower the divorce rate. He has criticized what he sees as an excessive Republican focus on sexual issues such as gay marriage.

Boteach, who once was affiliated with the Chabad movement, bills himself as “America’s Rabbi.” He hosts a show on TLC called “Shalom in the Home” and is the author of several books, including “Kosher Sex,” “Kosher Adultery,” “The Kosher Sutra” and, most recently, “Kosher Jesus.”