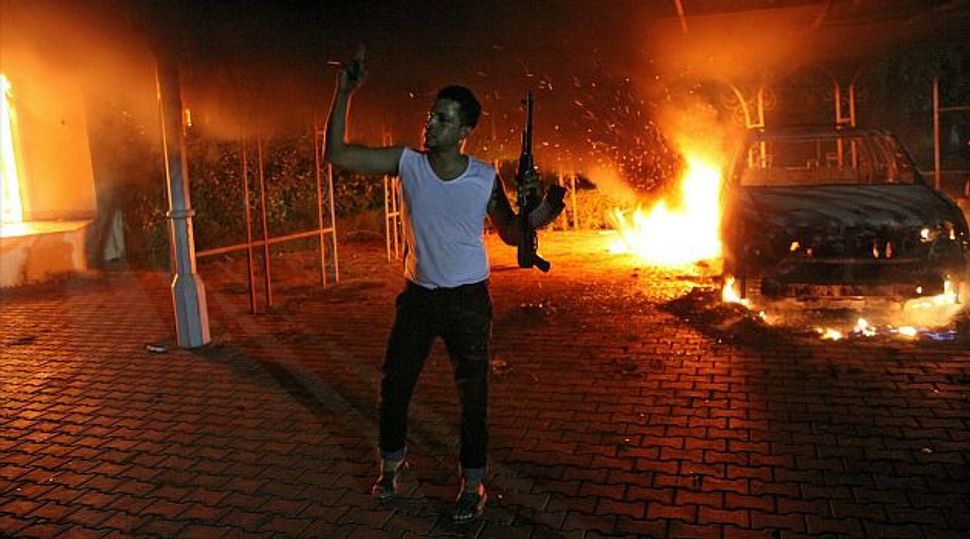 FIery Attack: As demonstrations rage against a video depicting the prophet Muhammed, attackers fired a rocket that killed the U.S. ambassador to Libya. Image by getty images

The U.S. ambassador to Libya and three other embassy staff were killed in a rocket attack on their car, a Libyan official said, as they were rushed from a consular building stormed by militants denouncing a U.S.-made film insulting the Prophet Mohammad.

Gunmen had attacked and burned the U.S. consulate in the eastern city of Benghazi, a centre of last year’s uprising against Muammar Gaddafi, late on Tuesday evening, killing one U.S. consular official. The building was evacuated.

The Libyan official said the ambassador, Christopher Stevens, was being driven from the consulate building to a safer location when gunmen opened fire.

“The American ambassador and three staff members were killed when gunmen fired rockets at them,” the official in Benghazi told Reuters.

There was no immediate comment from the State Department in Washington. U.S. ambassadors in such volatile countries are accompanied by tight security, usually travelling in well-protected convoys. Security officials will be considering whether the two attacks were coordinated.

The consular official had died after clashes between Libyan security forces and Islamist militants around the consulate building. Looters raided the empty compound and some onlookers took pictures after calm returned.

In neighbouring Egypt, demonstrators had torn down an American flag and burned it during the protest. Some tried to raise a black flag with the words “There is no God but God, and Mohammad is his messenger”, a Reuters witness said.

U.S. pastor Terry Jones, who had inflamed anger in the Muslim world in 2010 with plans to burn the Koran, said he had promoted “Innocence of Muslims”, which U.S. media said was produced by an Israeli-American property developer; but clips of another film called “Mohammad, Prophet of Muslims”, had been circulating for weeks before the protest.

That film portrayed Mohammad as a fool, a philanderer and a religious fake. In one clip posted on YouTube Mohammad was shown in a sexual act with a woman.

Jones, a pastor in Florida whose latest stunt fell on the anniversary of the Sept. 11, 2001, attacks on the World Trade Center and the Pentagon, triggered riots in Afghanistan in 2010 with his threat to burn the Koran.

Libya’s interim government has struggled to impose its authority on a myriad of armed groups that have refused to lay down their weapons and often take the law into their own hands.

It was clearly overwhelmed by Tuesday night’s attack on the consulate that preceded the assault on the ambassador.

“The Libyan security forces came under heavy fire and we were not prepared for the intensity of the attack,” said Abdel-Monem Al-Hurr, spokesman for Libya’s Supreme Security Committee.

In Benghazi, unidentified men had shot at the consulate buildings, while others threw handmade bombs into the compound, setting off small explosions.

On Wednesday morning, the compound stood empty, with passers-by freely walking in to take a look at the damage.

Walls were charred and a small fire burned inside one of the buildings. A small group of men was trying to extinguish the flames and three security men briefly surveyed the scene.

A Reuters reporter saw chairs, table and food lying alongside empty shells. Some blood stains could also be seen in front of one of the buildings. Three cars were torched.

The crowd of around 2,000 protesters in Cairo was a mixture of Islamists and teenage soccer fans known for fighting police and who played a part in the revolt that toppled Egypt’s leader Hosni Mubarak last year.

The fortress-like U.S. mission is near Tahrir Square, where Egypt’s uprising began and the scene of many protests since. Youths danced and chanted football songs. A Reuters reporter said they appeared to climb into the embassy compound almost as an afterthought.

“We sacrificed dozens and hundreds during the uprising for our dignity. The Prophet’s dignity is more important to us and we are ready to sacrifice millions,” said mosque preacher Mohamed Abu Gabal who joined the protest.

U.S. Secretary of State Hillary Clinton, in a statement late on Tuesday, confirmed the death of the U.S. consular diplomat in Libya, who was not identified, and condemned the attack there; but she made no mention of an attack on the Ambassador’s car.