Pope: Lebanon Could Still Be Model for Region 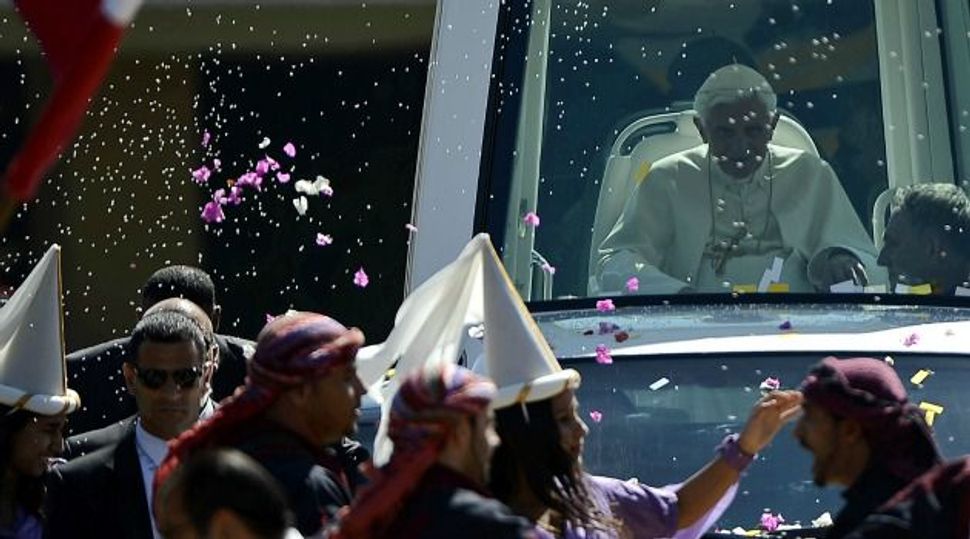 Pope Benedict urged multi-faith Lebanon on Saturday to be a model of peace and religious coexistence for the Middle East, which he called a turbulent region that “seems to endure interminable birth pangs”.

The pope, on the second day of a visit clouded by war in neighbouring Syria and protests across the Muslim world, told a gathering of Lebanese political, religious and cultural leaders that religious freedom was a basic right for all people.

Christianity and Islam have lived together in Lebanon for centuries, he said, sometimes within one family. “If this is possible within the same family, why should it not be possible at the level of the whole of society?” he asked.

“Lebanon is called, now more than ever, to be an example,” he said, inviting his audience “to testify with courage, in season and out of season, wherever you find yourselves, that God wants peace, that God entrusts peace to us”.

Lebanon – torn apart by a 1975-1990 sectarian civil war – is a religious mosaic of over four million people whose Muslim majority includes Sunnis, Shi’ites and Alawites. Christians, over one-third of the population, are divided into more than a dozen churches, six of them linked to the Vatican.

Outside the palace, a Muslim onlooker named Amira Chabchoul said: “We came to support the pope and also get support from him, because our experience has been that when we listen to him, we are touched and we are helped in our lives.”

On Friday hundreds of protesters against an anti-Islam film dodged gunfire and teargas to hurl stones at security forces in Lebanon’s Tripoli where one demonstrator was killed and two injured. Protesters chanted “We don’t want the pope” and “No more insults (to Islam)”.

In his remarks, Suleiman said the Syrian people should be able to “attain what they desire in terms of reform, freedom, democracy … through the appropriate dialogue and political means, away from any form of violence and coercion”.

Benedict began his visit on Friday with a call for an end to all arms supplies to Syria, where the tiny Christian minority fears reprisals if Islamists come to power at the end of the bloody insurgency against President Bashar al-Assad.

He also described the Arab Spring movement as a “cry for freedom” that was a positive development as long as it ensured tolerance for all religions.

Coptic Christians, about 10 percent of Egypt’s population, have come under repeated attack by Islamists since the overthrow of former President Hosni Mubarak. They worry the new government will strengthen Islamic law in the new constitution.

In Egypt, Libya and Tunisia, hardline Salafis have brought a new religious intolerance against fellow Muslims such as Sufis, whose shrines they are destroying as heretical.

Benedict avoided mentioning specific cases, but spelled out clearly the moral reasoning against violence and radicalism.

“If we want peace, let us defend life,” he said. “This approach leads us to reject not only war and terrorism, but every assault on innocent human life.”

Before his speech, Benedict held a private meeting with leaders of the Sunni, Shi’ite and Alawite Muslim communities and of the Druze, an offshoot of Shi’ism with other influences.

All main religious groups, including the militant Shi’ite Hezbollah movement, assured the Vatican in advance of their support for the trip and their representatives have attended several of the pope’s events with other faith leaders.

The pope angered Muslims in 2006 with a similar speech that implied Islam was violent and irrational, leading to protests around the Islamic world similar to the current wave of violence against a U.S.-made film that mocks the Prophet Mohammad.

In subsequent dialogue with Muslim scholars known as the Common Word group, he adopted their argument that both faiths actually had much in common, especially sharing the two main commandments to love God and neighbour.

He included that view in his Beirut speech when he warned the devil used human beings to spread evil in the world.

“Having broken the first commandment, love of God, it goes on to distort the second, love of neighbour. Love of neighbour disappears, yielding to falsehood, envy, hatred and death.”

Chief Mufti Mohammad Rashid Qabbani praised the pope for visiting “in these fateful circumstances that Lebanon and the region are living through” and stressed the common goals of both faiths, “not just in Lebanon but in the whole Arab world”.

“The flight of Christians hurts us Muslims because it means we cannot live with others. We value the Christian presence in Lebanon and the Arab region and the partnership in the national unity in Lebanon,” he said.

In an appeal to the region he issued on Friday, Benedict called for more Muslim-Christian dialogue and urged Christians not to leave the region where their faith was born.

Emigration, wars and a low birth rate have cut Christian ranks to about five percent of the Middle Eastern population compared to 20 percent a century ago.

After the speech, Benedict rode through southern Beirut in his popemobile, flanked by mounted guards of honour and cheered on by crowds waving Lebanese and Vatican flags.

Pope: Lebanon Could Still Be Model for Region