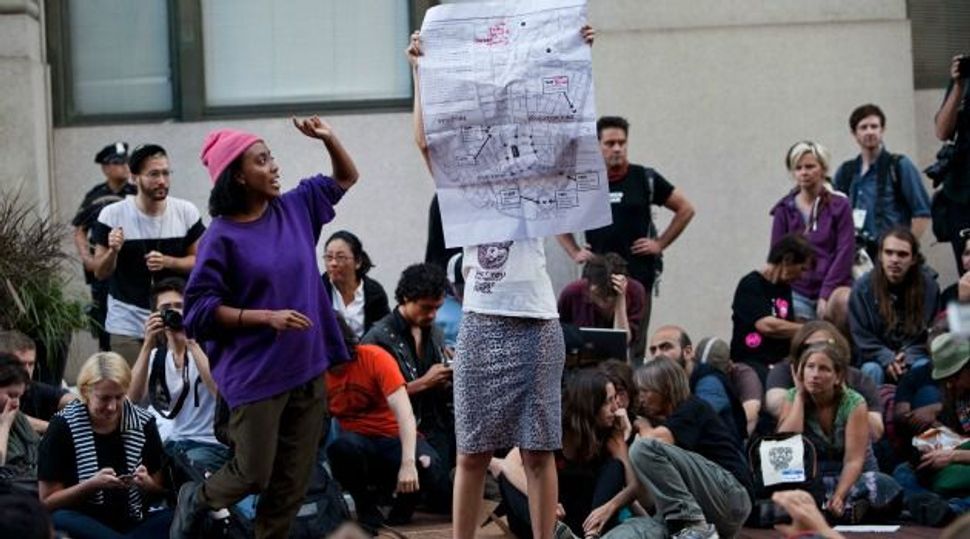 Occupy Wall Street celebrated its one-year anniversary on Monday with a day of demonstrations that resulted in nearly 150 arrests but failed to produce the turnout or fervor that first propelled the movement into the national conversation.

The demonstrations attracted roughly 1,000 activists, down sharply from last fall, highlighting the challenge the movement has faced in trying to sustain interest in protesting against what it calls an unfair economic system.

The New York Police Department, with a heavy presence of officers on foot, in cars, and on motorcycles and horseback, arrested about 146 demonstrators in the financial district, it said. The NYPD set up heavy security around the New York Stock Exchange, major banks and government buildings.

“A lot of media is saying that Occupy is dying down, but I think the fact that over 100 people were arrested this morning shows that Occupy is still part of the conversation,” said one protester, Caleb Maupin, 24, of Queens.

“We’ve been locked out, people my age don’t have much chance of getting a job, so we have to do something to get people’s attention,” Maupin said.

Marching to the sounds drums, trumpets and saxophones, the protesters showered the streets of lower Manhattan with chants of “All Day, All Week, Occupy Wall Street” and taunted police with donuts suspended at the end of fishing rods.

“Put down your guns and join the people,” one middle-aged woman shouted at police.

Occupy Wall Street protesters, who popularized the phrase “We are the 99 percent,” kicked off the demonstrations early Monday near Zuccotti Park, where a spontaneous encampment became their unofficial headquarters last year.

Crowds grew steadily over the course of the day, with protesters briefly disrupting the morning commute and drawing a smattering of onlookers, both New Yorkers making their way to the office and tourists taking in the financial district on a warm fall day.

Still, confrontations between protesters and the police, while heated, stopped short of the disorder that broke out at times last year. In one instance last October, more than 700 protester were arrested when they blocked traffic on the Brooklyn Bridge.

“It seems that Occupy Wall Street is losing momentum,” said Vincent Smorto, 63, a network engineer from Brooklyn who stopped briefly to watch the protests. “In the 60s when people were protesting the Vietnam war they knew exactly what they wanted. These folks do not seem exactly clear on what it is they want.”

Many of those working in the financial district shrugged off the protests, saying they amounted to little more than a brief inconvenience.

“A lot of people who work round here, they’re not making the policies they’re protesting against,” said Raymond Villaneuva, an intern at a mergers and acquisitions advisory firm.

The grassroots movement caught the world by surprise last fall with a spontaneous encampment in lower Manhattan that soon spread to cities across North America and Europe.