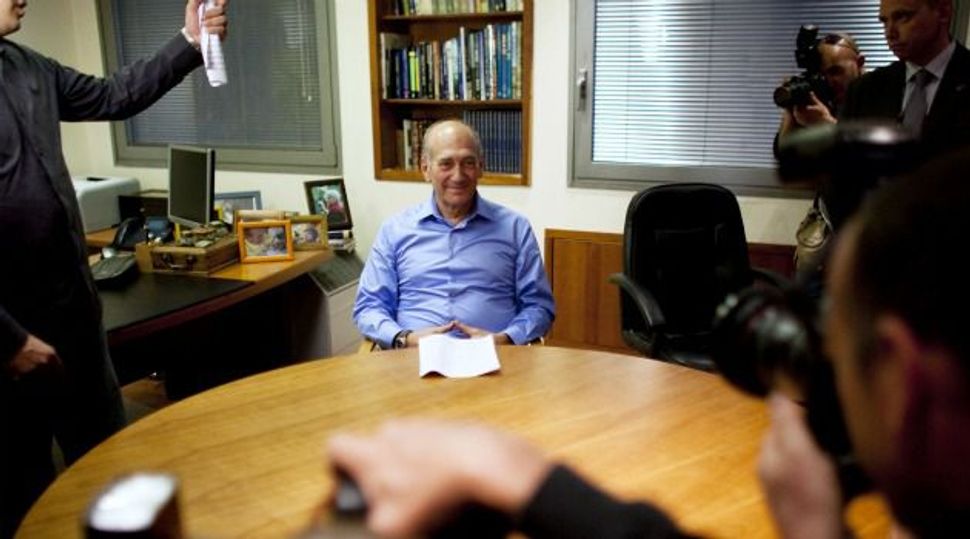 Former Israeli Prime Minister Ehud Olmert, who has just received a slap-on-the-wrist sentence in a corruption case, is considering staging a political comeback in an election early next year, a former aide said on Wednesday.

Such a move could shake up a race that opinion polls suggest Prime Minister Benjamin Netanyahu, viewed with suspicion abroad over his tough stance on Iran’s nuclear programme, is poised to dominate, with no current heavyweight opposition contenders.

Olmert, credited internationally for pursuing peace with the Palestinians, resigned as prime minister in 2008 amid graft allegations.

But he was largely acquitted of the charges at the end of a trial last July and received a suspended jail term that did not raise a legal obstacle to a political resurrection.

Yisrael Maimon, a former aide, said Olmert was mulling whether to become a candidate in the early ballot that Netanyahu announced on Tuesday eight months ahead of schedule after failing to secure coalition backing for an austerity budget.

“When so many people have told you that you will be able to replace the prime minister and that it’s a very critical time for the country, then you certainly can think about it,” Maimon told Army Radio.

Netanyahu towers above other Israeli leaders in surveys that ask voters who can best run the country.

As such, an early election did not appear much of a gamble for him. However, privately his aides have pointed to Olmert as the only person they feel could offer a realistic challenge.

Olmert, who once led the centrist Kadima party, has not commented publicly on the possibility of a return to the frontline after he was forced into a humiliating retreat over the graft charges he always maintained were politically motivated.

An opinion poll two weeks ago said only 16 percent of voters would consider backing Olmert if he decided to head a centrist bloc, but Israeli media has aggressively talked up his chances.

“The lack of a leading candidate … is what led Olmert to believe that there might be a once-in-a-lifetime window of opportunity for him to unite the centre-left camp and pose an alternative to Netanyahu,” columnist Mazal Mualem wrote in mainstream Maariv daily on Wednesday.

Haim Ramon, a former Kadima cabinet minister, said he hoped to recruit his ex-boss and other party leaders lagging behind Netanyahu in the polls into a new centrist movement.

“I am speaking with Olmert, who of course has not made his decision,” Ramon said on Army Radio.

The 66-year-old Olmert might seem to be an unusual choice. A risk-taker who led Israel into two wars, in Gaza and Lebanon during his term, he is still embroiled in a separate bribery trial dating to his time as Jerusalem’s mayor from 1993 to 2003.

However, although deeply unpopular at home in the waning days of his premiership, he has the experience and political savvy to take on Netanyahu.

“He has the potential. We are talking about two prime ministers,” political analyst Hanan Crystal said on Israel Radio. “The public will understand it is Ehud versus Benjamin, and his (candidacy) will have greater potential.”