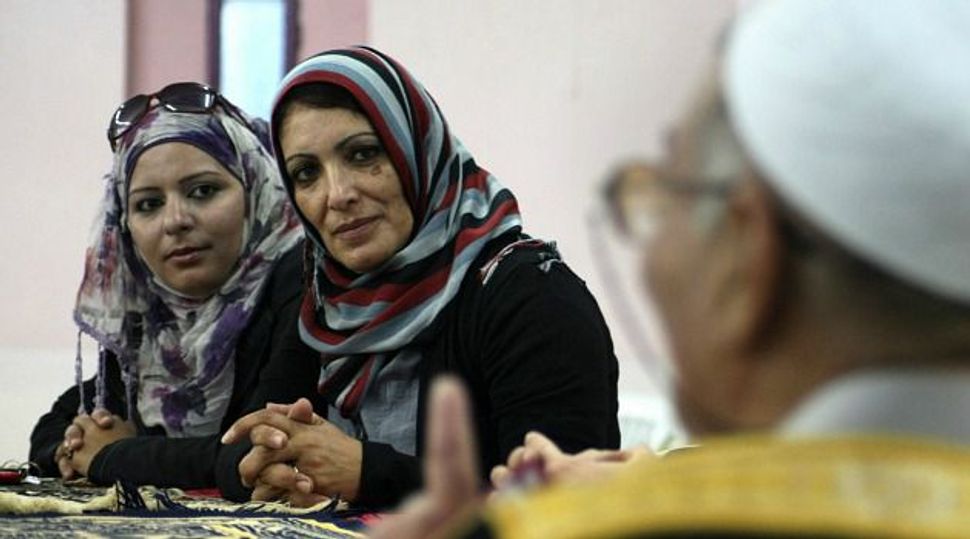 Changing Society: Palestinian women are pressing for a bigger role in a society still dominated by men. Part of that struggle includes running for political offices. Image by getty images

“Many people still believe the post of mayor is exclusively for men,” says Vera Baboun, aiming to become the first female mayor of the Palestinian town of Bethlehem, and in the process shake up a society where men still make the laws and do the deals.

The university lecturer has a good chance of achieving the first goal in municipal elections being held across the West Bank on Oct. 20. She heads a bloc of 12 Muslims and Christians in Bethlehem representing the Fatah movement, which one recent survey found to command 49 percent support in the West Bank.

The municipal ballots are the first in the territory since 2005. In the ancient hilltop city just a few miles from Jerusalem, posters with the faces of six blocs of hopefuls cover nearly every lamp post and wall.

Baboun’s group promise to improve services and promote the tourism potential of the town where the Bible says Christ was born. “Women have abilities, vision and a unique way of bringing about change,” Baboun told Reuters.

For many residents, things can only improve after seven years in which the town’s workings were hobbled by a withdrawal of international aid after five members of the Islamist Hamas group were elected to the 15-member council in 2005.

Western donors feared their funds would be channelled to a group that refuses to recognise Israel’s right to exist, and that they consider a terrorist organisation. To their relief, Hamas is not standing in this month’s election.

For her part, Baboun, a mother of five, has no previous political experience.

But victory for someone who is head of a local school and a social worker in addition to her research in gender studies could mark a new departure for women in a community still run along patriarchal lines.

In July, Bethlehem was shocked when, in broad daylight in the bustling marketplace, 28-year-old Nancy Zaboun’s husband stabbed her to death.

He is awaiting trial by a judicial system where, Baboun says, “crimes against women are taken lightly”.

The Palestinian Independent Commission for Human Rights (ICHR) says 13 women were killed by relatives in 2011, and 12 have been killed so far this year.

In 2011, following an outcry over the drowning of a young woman whose family disapproved of her suitor, President Mahmoud Abbas, leader of the Fatah movement, suspended two laws previously used to justify crimes against women.

But the rights group Al Haq says the penal code is still riddled with loopholes, including at least four laws listing circumstances that can be used to mitigate crimes against women.

Women’s advocacy groups say men have exploited these provisions in order to kill women over disputed inheritances, to remarry, or to conceal rape and incest by claiming in court to have acted in the name of “family honour”.

Of Zaboun’s killing, Baboun says: “Had there been laws that deter such crimes, it would never have happened.”

Some 2.5 million Palestinians in the West Bank and east Jerusalem have been under Israeli occupation since a 1967 war.

The Palestinian legal system, at best a flawed jumble of laws inherited from successive colonial powers, has not fully recovered from an uprising against Israeli occupation in 1987 that left it in shreds.

That vacuum has been filled of necessity by archaic tribal law, effective in its own way at preventing cycles of retribution by requiring the families of perpetrators and victims to agree a settlement.

But persuading people to trust the PA police and courts is hard, and clans are still the mainstay of social order, resolving everything from car accidents to murder.

In Zaboun’s case, 600 grim-faced men from both families gathered for an ‘atwa’, or truce, two weeks after her killing and a trusted dignitary negotiated a settlement or ‘diya’ to compensate the dead woman’s family.

Palestinian Minister of Women’s Affairs Rabiha Diab says that, despite being sidelined by patriarchy and legal discrimination, Palestinian women do have a “strong presence”.

The city of Ramallah, seat of the Palestinian Authority, which exercises limited self-rule in parts of the West Bank, boasts the Palestinians’ first elected female governor and mayor, as well as a newly appointed government spokeswoman.

“Despite, but perhaps also thanks to, decades of political turmoil, we were thrust into political life early in the game,” Diab said. Women currently make up a quarter of the cabinet, and 16.6 percent of the workforce, up from 10.3 percent in 10 years.

But this ratio is still low compared to the World Bank’s 26 percent average for the Middle East and North Africa. And though over 50 percent of Palestinian university students are female, nearly half of women with higher education remain unemployed.

“Though women should always be the primary defenders of their rights,” Baboun says, “change will only be realised when men join in too.”