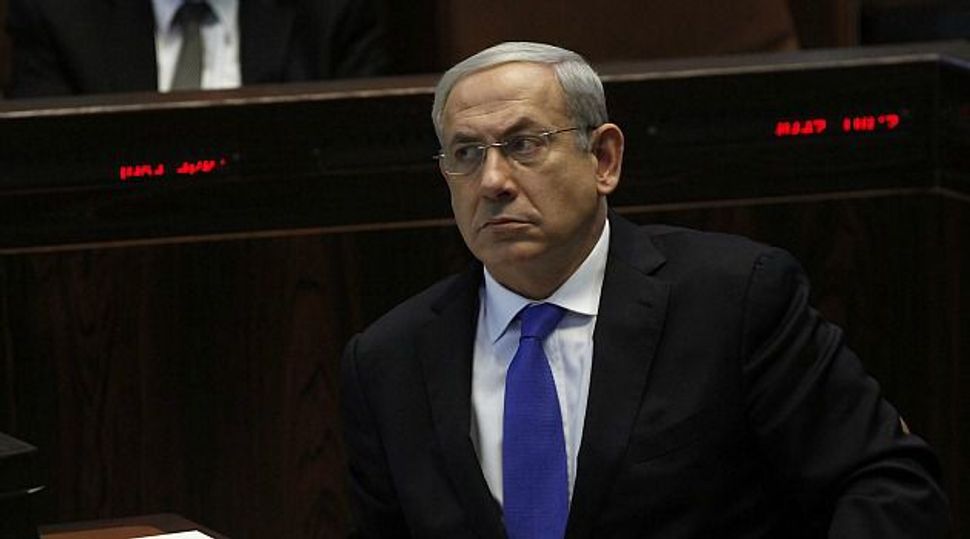 Campaign Kickstart: Benjamin Netanyahu boasted that he had forced the world to take notice of Iran?s nuclear program, as he kicked off his reelection campaign with a speech in the Knesset. Image by gett images

Prime Minister Benjamin Netanyahu kicked off his re-election campaign on Monday, saying Israel had new unspecified “capabilities” to act against Iran’s nuclear threat, an issue he said he had placed at the heart of the global debate.

In a combative speech to parliament, he urged lawmakers to back a motion to hold an election on Jan. 22, a date approved by his cabinet after he said difficulties agreeing a 2013 budget with coalition partners had meant such a vote was necessary.

The motion was expected to be approved during a marathon session since most Israeli political parties supported it. A final vote was expected by early on Tuesday.

Opinion polls predict an easy election victory for right-wing Likud party leader Netanyahu who is likely to head a coalition that includes nationalist and religious parties.

“In less than 100 days the people of Israel shall decide who shall lead it to confront the greatest security challenges we have ever faced, and the world’s toughest economic crisis in 80 years,” Netanyahu said.

Alluding to past threats to attack Iran to stop it from building a nuclear bomb, something Tehran denies, Netanyahu said Israel now had “the capabilities to act against Iran and its satellites, capabilities we didn’t have in the past”.

He did not elaborate but said he had “put the danger of Iran’s nuclear programme at the centre of the global agenda”.

“Whoever makes light of the threat of Iran’s nuclear programme doesn’t deserve to govern Israel for even a single day,” he added, taking aim at rivals who accuse him of using the Iran issue as a scare tactic to remain popular.

Netanyahu also said he had managed to avoid going to war during his two terms in office – three years in the late 1990’s and his current term since March 2009.

“We didn’t wage any unnecessary wars, or any wars at all,” he said, saying fewer Israelis had been killed in conflicts with the nation’s Arab neighbours.

The comment was widely seen as a swipe at Ehud Olmert, a former prime minister who is seen as Netanyahu’s potentially toughest rival if he decides to make a comeback after a recent acquittal on most corruption charges.

Olmert and his centrist Kadima deputies presided over two wars during the two years they were in office, including a month-long campaign against Lebanon’s Hezbollah in 2006 and a three-week offensive against Gaza Hamas militants in 2008-2009.

Both wars killed hundreds and drew wide international condemnation of Israel which was criticised for the deaths of Lebanese and Palestinian civilians.

Shaul Mofaz, the current head of the centrist Kadima party, accused Netanyahu of “blatantly interfering in the U.S. election,” alluding to Netanyahu’s open disputes with President Barack Obama on Iran and the Palestinians ahead of a Nov. 6 presidential vote.

Turning to economics, Netanyahu touted what he called a “revolution” under his stewardship, citing highways that had been paved to link up Israel’s centre with peripheral towns and the creation of new jobs despite a global financial crisis.

Economics was one of the main reasons Netanyahu last week decided to move up Israel’s national election by eight months from a scheduled October 2013.

He cited differences with coalition partners over austerity measures in next year’s fiscal budget, as well as security challenges including the threat of a nuclear Iran.