Even LeBron James Is State Secret at Gitmo 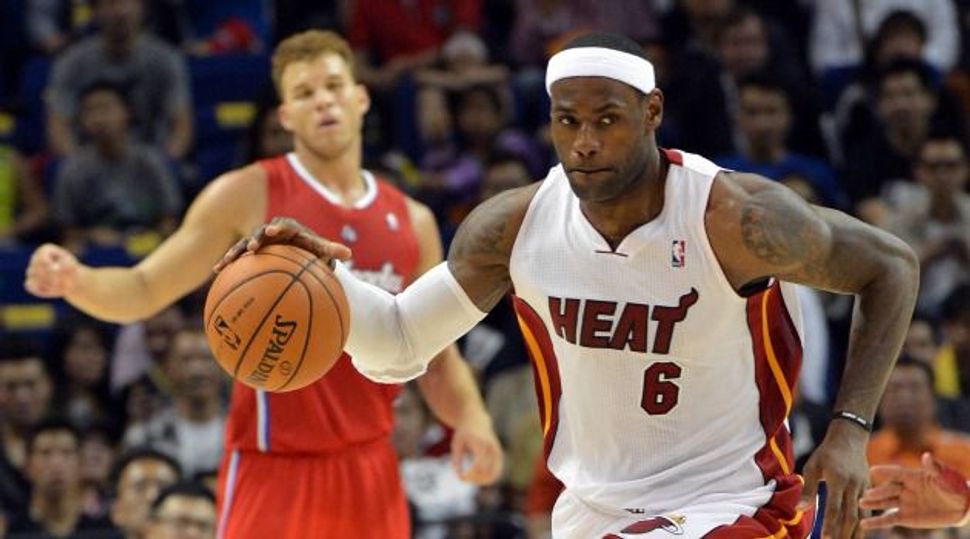 Top Secret: Everyone has an opinion about basketball superstar LeBron James. But when terror suspect Ramzi Binalshibh wrote that LeBron is a ?bad man? for dumping Cleveland, the government kept it under wraps for two months. Image by getty images

U.S. security restrictions governing the statements of five Guantanamo prisoners charged in the Sept. 11 plot are so stringent that one defendant’s assessment of basketball star LeBron James was treated as a top national secret for two months, his lawyer said on Tuesday.

Yemeni defendant Ramzi Binalshibh, who is accused of helping the Sept. 11 hijackers find flight schools, wrote a note to his lawyer criticizing the National Basketball Association star’s decision to leave the Cleveland Cavaliers for the Miami Heat in 2010, the lawyer, Navy Lieutenant Kevin Bogucki, said in a pretrial hearing at the Guantanamo Bay U.S. Naval Base in Cuba.

“LeBron James is a very bad man. He should apologize to the city of Cleveland,” Bogucki quoted the note as saying.

Because Binalshibh and his four co-defendants were held for years in secret CIA prisons before being sent to Guantanamo in 2006, every word they write or utter is presumed to be top secret unless a government Security Classification Review Team declares them safe for public release.

“It took that classification authority approximately two months to determine that my client’s opinion of LeBron James did not pose a grievous threat to national security,” said Bogucki, who did not indicate when the note was written.

Defense lawyers say the security restrictions are overbroad and impair their ability to prepare a defense in a case that could end with their clients’ execution.

The defendants, including Khalid Sheikh Mohammed, the alleged mastermind of the hijacked plane attacks that killed 2,976 people in the United States in 2001, are charged in the Guantanamo tribunal with conspiring with al Qaeda, attacking civilians and civilian targets, murder in violation of the laws of war, destruction of property, hijacking and terrorism.

Security restrictions surrounding their trial are a key topic at a weeklong pretrial hearing this week.

Prosecutors contend that the restrictions are necessary to protect U.S. national security and safeguard CIA interrogation methods and sources.

The defense lawyers say the CIA gave up control of that information when it disclosed those methods and sources to the defendants, and that the restrictions are aimed at preventing them from discussing treatment that amounted to torture.

Binalshibh and defendant Walid bin Attash, a Yemeni raised in Saudi Arabia who is accused of training two of the Sept. 11 hijackers at an al Qaeda camp in Afghanistan, were the only two defendants who showed up in the courtroom on Tuesday.

The judge, Army Colonel James Pohl, ruled on Monday that attendance in court was strictly voluntary during pretrial hearings.

Mohammed came to the court building but watched the proceedings on a monitor from another room. Defendants Ali Abdul Aziz Ali, who is accused of providing money and travel assistance for the hijackers, and Mustafa Ahmed al Hawsawi, who is accused of being a key financial facilitator, stayed behind in their cells at a special high-security camp that holds the former CIA prisoners.

The judge will also hear news organizations’ request to limit closing of the courtroom for secret sessions and will be asked to decide whether the U.S. Constitution governs the tribunals being held at the U.S. base in southeast Cuba.

Even LeBron James Is State Secret at Gitmo