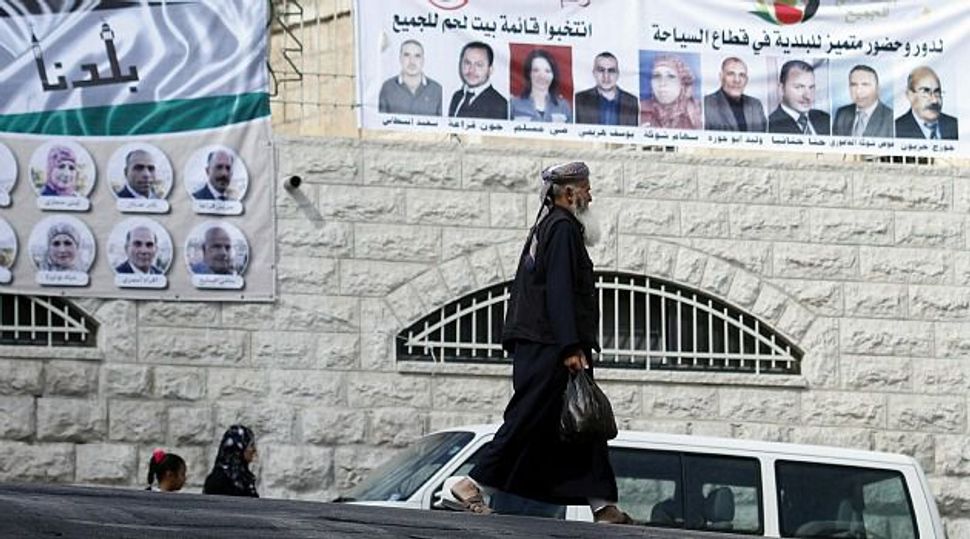 Gains by rebels and a low turnout have dealt a blow to Fatah, the dominant party in the Israeli-occupied West Bank, which had hoped to paper over internal squabbles and a lack of cash with a strong election showing.

The long-delayed elections for control of 94 West Bank towns and villages took place on Saturday for the first time in six years and were in many ways a vote of confidence in Mahmoud Abbas, the Western-backed president and Fatah chief, and his inner circle.

Worse for the leadership, barely half of eligible voters turned out and and Hamas backers in the West Bank also seemed to have stayed at home.

The result may further weaken Abbas’s hand internally, even as he is due to make his case for statehood recognition at the United Nations next month.

“The turnout and the non-participation by the Islamists won’t make them happy, and the political failure both in participation and in results is worse for them than in previous polls,” Hassan Asfour, a critic of the authorities, wrote in an editorial in the online Amad newspaper.

“The preliminary results on the victories of those who dropped out of Fatah … registered a strong rebuke to the way the party is being run.”

Technocrat Prime Minister Salam Fayyad was the butt of violent anti-austerity protests last month throughout the West Bank, along with other party figures, after the heavily indebted government withheld salaries when it ran out of money and hiked fuel prices to meet agreements with Israel.

Wins for ambitious local party bosses in Nablus and Jenin may promise futher headaches for national leaders, who have tried to tame rogue Fatah elements in the northern towns by stripping the candidates’ party memberships, and earlier this year purging security officials and waves of arrests.

Once an exile guerrilla group, Fatah traded fatigues for business suits when the Palestinians signed the Oslo accords with Israel in 1994 and began to govern parts of the West Bank, which still remains mostly under Israeli control.

Fatah described the conduct of the election as a victory and a vindication of its platform, which unlike Hamas, still hopes for a negotiated peace settlement with Israel.

Fayyad hailed “an important and constructive process … despite difficult circumstances”.

“The local elections which took place in the northern provinces do not affect reconciliation efforts, but help to deepen unity and engrain democratic principles,” Fayyad said.

Hamas lawmaker Ahmed Attoun hailed the results as a victory for the people who shunned the elections.

“We know that these results are a victory to the Islamist currents which called to boycott these elections, which did not succeed despite the big effort made to bolster turnout,” said Attoun, who won his post in parliamentary elections cancelled by a short, bloody factional war in 2007.

“It shows that the Palestinian people stand with the choice of having elections based on a national consensus,” the West Bank legislator told Reuters.