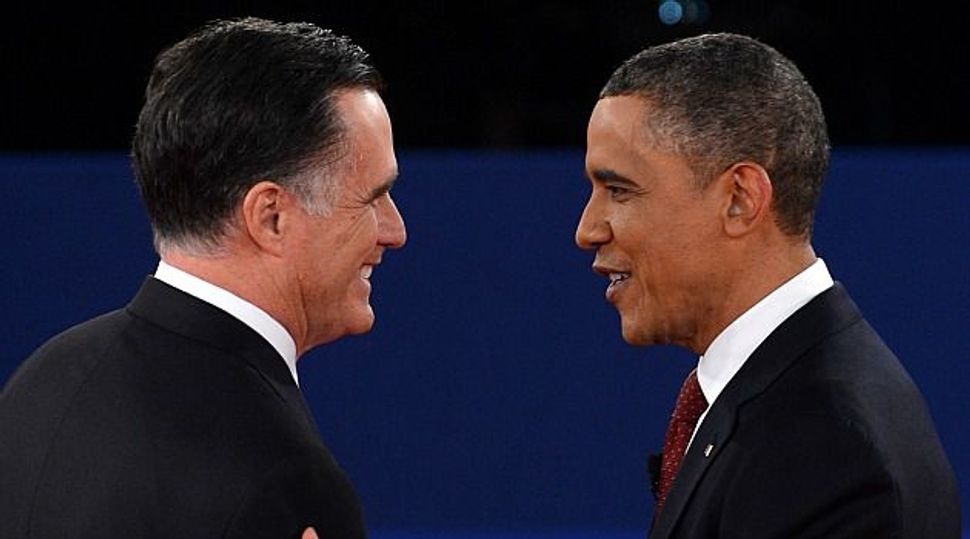 When President Barack Obama and Mitt Romney face off on Monday in their third and final debate, it will be the Republican challenger’s last best chance to recover from his botched “Libya moment” and exploit vulnerabilities in his opponent’s foreign policy record.

But Romney has an uphill struggle to make his case against Obama, who will be buoyed by the advantages of incumbency as well as polls showing him with an edge – though a shrinking one – on the question of who is more trusted in global affairs.

This week’s debate in Boca Raton, Florida, coming just 15 days before the election and devoted entirely to foreign policy, could be the riskiest of the three nationally televised showdowns for Romney, largely because of his inexperience and recent blunders on the world stage.

Romney’s missteps in criticizing Obama’s handling of a deadly September attack on the U.S. diplomatic mission in Benghazi – the focus of a vividly testy exchange in the previous debate – have complicated his broader strategy of trying to cast the president as a weak steward of American power abroad.

Deprived of one of his most potent lines of attack, expect Romney to instead focus more of his criticism on Obama’s policies toward Iran, Israel, Syria, China, Afghanistan and Russia.

“Obama has a record, and Romney doesn’t, so he can just cherry-pick the arguments,” said Jon Alterman, a former State Department policy planner now at the Center for Strategic and International Studies think tank in Washington. “But that doesn’t mean any of it will stick.”

Romney’s aides hope that chipping away at Obama’s credibility on foreign policy and national security – areas the White House once saw as largely immune from Republican attack – can help put him over the top with undecided voters in the final weeks of a White House race still too close to call.

Obama’s policies have faced setbacks recently, from challenges to U.S. interests in the Middle East to a string of attacks on U.S.-led NATO forces in Afghanistan by the Afghan troops they are supposed to be training.

A report in The New York Times that the Obama administration has agreed in principle with Iran to hold one-on-one talks over Tehran’s nuclear program could provide a fresh avenue for Romney to cast Obama as too willing to accommodate.

“The other thing that gets interesting about the story, if it’s accurate, it sounds like the U.S. is taking a position that we’re likely to jettison our allies,” he told NBC’s “Meet the Press.” “The last thing we would want to do is abandon our allies on this and make it a one-on-one negotiation,” he said.

It remains to be seen how much traction any of this will have with voters, whose main concerns by far are the economy and jobs.

The problem for Romney is that in focusing on Obama’s trouble spots, he also further exposes his own weaknesses.

As former governor of Massachusetts and an ex-businessman, he is out of his comfort zone when not focused on domestic and economic matters.

That was evident in last week’s debate when he mistakenly said Obama took weeks to acknowledge that the Benghazi assault – which claimed the lives of the U.S. ambassador and three other Americans – was a terrorist attack.

Obama, who said he had done so in aa appearance in the White House Rose Garden the day after the attack, challenged Romney to “check the transcript” and chastised him for trying to score political points from a national tragedy.

A slew of pundits dubbed it Romney’s “Libya moment,” and some of his own aides conceded privately that Obama got the better of him.

On top of that, Obama managed to shift the focus away from the thornier question of whether the administration had ignored requests to beef up diplomatic security in Libya.

Romney went silent on Libya after Tuesday’s encounter but aides say the Republican, hunkered down in debate prep in Florida this weekend, will be ready to deal with it on Monday night when it is all but certain to come up again.

What Romney hopes to do is press his point, drowned out in the last debate, that the recent wave of anti-American violence in Libya and other parts of the Middle East shows Obama’s foreign policy is “unraveling before our very eyes.”

At the same time, he will want to avoid giving Obama another opportunity to go on the offensive.

“I doubt the governor will end up parsing words. That’s not the most productive thing to do,” said Eliot Cohen, a Romney adviser and neoconservative foreign policy expert at the Johns Hopkins School of International Studies in Washington.

Romney must also show voters he has what it takes to be a capable commander-in-chief, and he will seek to counter any attempt by Obama to “paint him as an insane warmonger,” Cohen said.

Obama – who has touted the U.S. withdrawal from Iraq as a signature foreign policy accomplishment – has signaled he could use the debate to caution war-weary voters of the risk of a more hawkish Romney presidency.

At a campaign rally in New Hampshire last week, Obama suggested Romney was promoting the kind of foreign policy that “takes us into wars without a plan to get us out.”

A Pew Research Center survey, conducted after the first debate but before the second, showed Obama ahead 47 percent to 43 percent on the question of who would make wiser foreign policy decisions. That was much narrower than Obama’s 15 percentage-point advantage in a poll early last month.

Romney will be under pressure to sharpen contrasts with Obama when the two men sit side-by-side across the table from moderator Bob Schieffer, known for a cantankerous demeanor with guests on the Sunday morning CBS news show “Face the Nation.”

The 90-minute debate will be divided into six segments: America’s role in the world; the war in Afghanistan; Israel and Iran; the changing Middle East; terrorism; and China’s rise.

Critics have accused Romney of relying on generalities and platitudes – he has hearkened back to Ronald Reagan’s “peace through strength” doctrine – and he could be put on the spot if he resists providing specifics.

Romney has promised to tighten the screws over Iran’s nuclear program. He has accused Obama of “leading from behind” as Syria’s civil war expands, and of a politically timed exit from the unpopular Afghanistan war.

But in each case, critics say, he has not detailed alternatives policies.