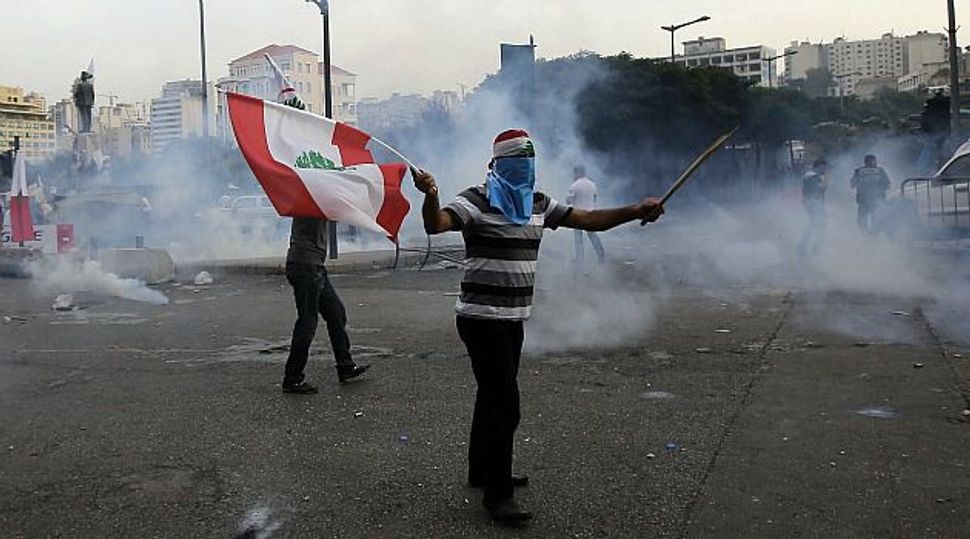 Unrest Spreads: The killing of a security official has touched off some of the worst fighting in Lebanon since the 2005 assassination of Rafik al-Hariri Image by getty images

The Beirut car bomb that killed a top Lebanese security official will probably prove to be the most destabilising attack in Lebanon since the 2005 assassination of former prime minister Rafik al-Hariri.

What is less clear – and this is something that instils fear in a society still scarred by its 1975-90 civil war – is whether the attack was a reprisal or the start of a campaign of violence by Damascus and its allies, suspected by many Lebanese of trying to spread Syria’s conflict across its borders.

Lebanon, which has yet to fully overcome its own wartime sectarian divisions, is too fragile to withstand being enveloped by a Syrian conflict that is beginning to mirror Lebanon’s own slide into fratricidal bloodletting.

Wissam al-Hassan, the security official who died with seven others on Friday, was buried with full honours in an emotional state funeral on Sunday at the Rafik al-Hariri mosque, the heart of the former premier’s reconstruction legacy in central Beirut.

The funeral turned into a political rally against Syria and its local allies in Lebanon.

Hassan is thought to have been targeted because in August, after a carefully planned sting operation, his Internal Security Forces intelligence unit arrested a former Lebanese cabinet minister close to Syrian President Bashar al-Assad.

The minister, Michel Samaha, is charged with transporting Syrian-assembled bombs to launch attacks on sectarian targets in Lebanon. Two Syrian officers, including General Ali Mamlouk, were indicted with Samaha in a humiliating blow to Assad and an unprecedented move against Lebanon’s dominant neighbour.

Hassan also led the investigation into Hariri’s murder and uncovered evidence that implicated Syria and Hezbollah, although both deny the charge. An international tribunal accused several Hezbollah members of involvement in the murder.

“There is a probability that this will be the start of a new period in which we will see more assassinations, bombings and other problems,” said Sarkis Naoum, a columnist and Syria expert.

“Sectarian incitement is on the rise in the country and the killing of Wissam al-Hassan brought things to a head. We may be entering a very dangerous cycle. Anything might happen.”

“It is not possible for the Syria conflict not to have implications on Lebanon. The Lebanese have entered the Syria war – one side is with the Assad regime and another is against it. They are fighting each other by proxy,” Naoum said.

Tiny Lebanon, with its combustible sectarian mix, is being dragged into the Syria crisis with its rival Shi’ite and Sunni Muslims fighting on opposite sides.

The killing of thousands of Sunnis in Syria has angered Sunnis in Lebanon and across the region.

Hassan’s attacker did more than just kill Lebanon’s most powerful intelligence brain, who collected data on all major players and uncovered several plots in recent years. The killer performed a public execution that sent a warning to all those who dared challenge Syria in Lebanon.

Some analysts said the devastating attack against Hassan’s anti-Syria investigative establishment bore important similarities to the blast that targeted Assad’s inner circle of security officials in Damascus in July.

“Whoever did this attack wanted to deliver a message that they can reach anybody, that they can hit the highest level of intelligence,” said Beirut-based commentator Rami Khouri.

“Whoever did it wanted to say ‘we can still strike’.”

Mashnouq said the cases Hassan had brought against Samaha and Mamlouk were actions against Syria unprecedented in the history of Lebanon.

Despite the accusations from Lebanese politicians, both the Assad government and Hezbollah condemned the bombing.

The immediate destabilising effect of Friday’s blast can already be seen on the streets. Angry mourners tried to storm Prime Minister Najib Mikati’s offices in central Beirut after the funeral, breaking through a security barrier and scuffling with police who fired in the air in response.

“Mikati leave, get out,” chanted hundreds of protesters. They also chanted slogans against Assad, whom they accused of being behind the killing of Hassan.

The protesters blame Mikati’s pro-Syrian and pro-Iranian-dominated coalition government for failing to provide security or respond effectively to the killing.

Displeasure with Mikati came as spreading unrest raised fears among Lebanese that their country could slide back into the sectarian strife that haunted them for decades.

Mikati, a Sunni Muslim whom many see as unwilling to confront Hezbollah, said he had offered to step down, but that President Michel Suleiman asked him “to stay on to avoid letting Lebanon slide into turmoil”.

Syria’s civil war is already being played out on the streets of Tripoli in northern Lebanon, where fighting has erupted between Sunni fighters and Alawites.

The Syrian unrest has often spilled into Lebanese border villages with Assad’s forces shelling them, saying they were being used by rebels to smuggle in fighters and arms.

Officials close to Hassan, who had been under threat since he pushed for Samaha’s arrest, said he was using more than one safe house and that only two close associates, including the one who died with him, knew about his movements.

They suspect that Hassan’s movements were followed after his return on Thursday night from a trip abroad.

“There is a contentious history between Wissam al-Hassan and Syria, Iran and their Lebanese allies (Hezbollah),” said one security source, who declined to give his name. “All the espionage and intelligence services of the world are present in Lebanon and they pay huge sums of money for information and there are many Lebanese guns for hire.”

“TERRIBLE BUT NOT UNEXPECTED”

Khouri, a Middle East affairs specialist, said the Hassan assassination was a logical extension of what has been happening in Syria over the past 19 months.

“There has been a steady increase in violence and now we are going to the next step of assassinations, bombings and maybe clashes. It is terrible but it is not unexpected,” he said.

Hassan was killed because he was leading the investigation that led to the prosecution of some important figures, he said.

“It certainly reminds people of a string of assassinations that followed Hariri’s killing,” Khouri said.

Some analysts said the perpetrators of the bombing – which also wounded more than 80 – clearly aimed to push Lebanon into a new round of violence. But although sectarian tensions are high, Lebanese factions have no desire to return to civil war.

Despite persistent calls by Hariri and others for Mikati to resign, many politicians and Western envoys sought compromise, arguing that high-level resignations and political turmoil in Lebanon were precisely what Hassan’s killers intended.

Lebanon’s sectarian-based politics are further complicated by regional hostility. While the main Lebanese opposition has long been aligned with Washington and Saudi Arabia, Mikati’s governing coalition is endorsed by Iran and Syria.

The bombing also heightened fears among Western powers – which have criticised Assad and called on him to step down – that the Syria war could ignite conflict across the region.

Augustus Richard Norton, a Middle East specialist at Boston University, said it was too early to say who carried out the bombing.

“However, there is no doubt that al Hassan’s death will bring smiles to the face of Bashar al-Assad and his cohorts,” he wrote in a commentary.

Hassan, a Sunni who opposed Syria and Hezbollah, was laid to rest next to Rafik al-Hariri, whose assassination in a similar manner seven years ago sparked widespread protests that ultimately forced Syria to withdraw its troops from Lebanon after 20 years of military and political dominance.

But despite the military pull-out, Assad retained influence through his Lebanese allies in Hezbollah.