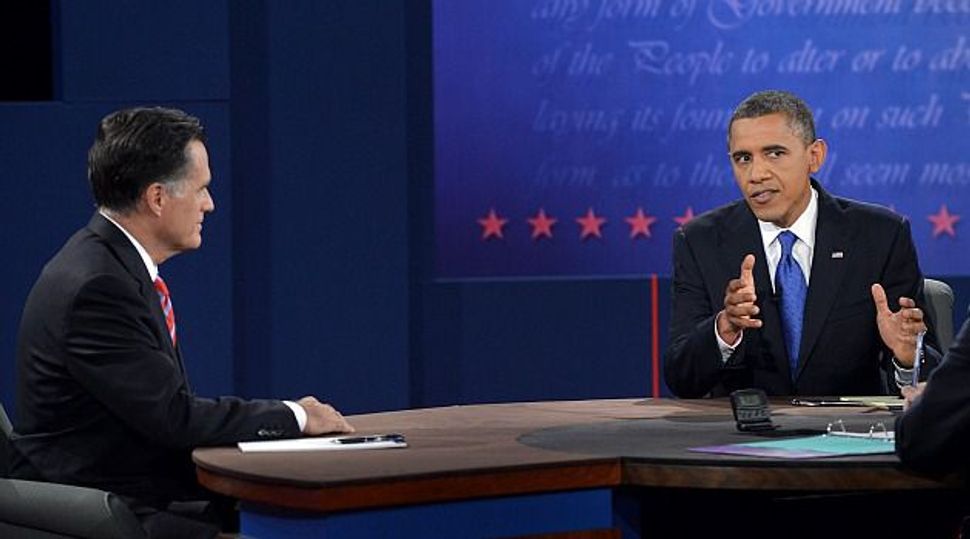 The U.S.-Israel alliance and the need to keep Iran from acquiring a nuclear weapon were major themes in the final presidential debate.

Both candidates said Monday during their foreign policy debate that they would stand with Israel should Iran attack it.

“Israel is a true friend,” President Obama said when debate moderator Bob Schieffer of CBS News asked the candidates whether they would see an attack on Israel as an attack on the United States. “It is our greatest ally in the region. And if Israel is attacked, America will stand with Israel.”

Along with Iran, China, Afghanistan, Syria and Pakistan, Israel was among the most mentioned countries at the debate.

Obama, who has faced attacks from Romney on his approach to Israel, was the first to mention the Jewish state.

Obama’s first mention came when he outlined, at the beginning of the debate, how he was dealing with the unrest roiling the Middle East.

“It is absolutely true that we cannot just beat these challenges militarily,” Obama said, “and so what I’ve done throughout my presidency and will continue to do, is, number one, make sure that these countries are supporting our counterterrorism efforts; number two, make sure that they are standing by our interests in Israel’s security, because it is a true friend and our greatest ally in the region.”

“I think the tension that existed between Israel and the United States was very unfortunate,” Romney said in arguing that he would better stand by U.S. allies.

Obama countered that during his presidency military and intelligence cooperation with Israel was “unprecedented.”

Israel returned as a topic in one of the debate’s most heated exchanges, when Romney reminded Obama that he had not visited the country during a 2009 Middle East tour.

Obama responded by first noting that he had visited Israel and U.S. troops abroad as a candidate – a reference to criticism of Romney for not visiting troops during his campaign travels abroad.

He also attacked Romney for organizing a fund-raiser during his own Israel trip in July.

“And when I went to Israel as a candidate, I didn’t take donors, I didn’t attend fundraisers, I went to Yad Vashem, the – the Holocaust museum there, to remind myself the – the nature of evil and why our bond with Israel will be unbreakable,” Obama said.

“And then I went down to the border towns of Sderot, which had experienced missiles raining down from Hamas,” he said. “And I saw families there who showed me where missiles had come down near their children’s bedrooms, and I was reminded of – of what that would mean if those were my kids, which is why, as president, we funded an Iron Dome program to stop those missiles.”