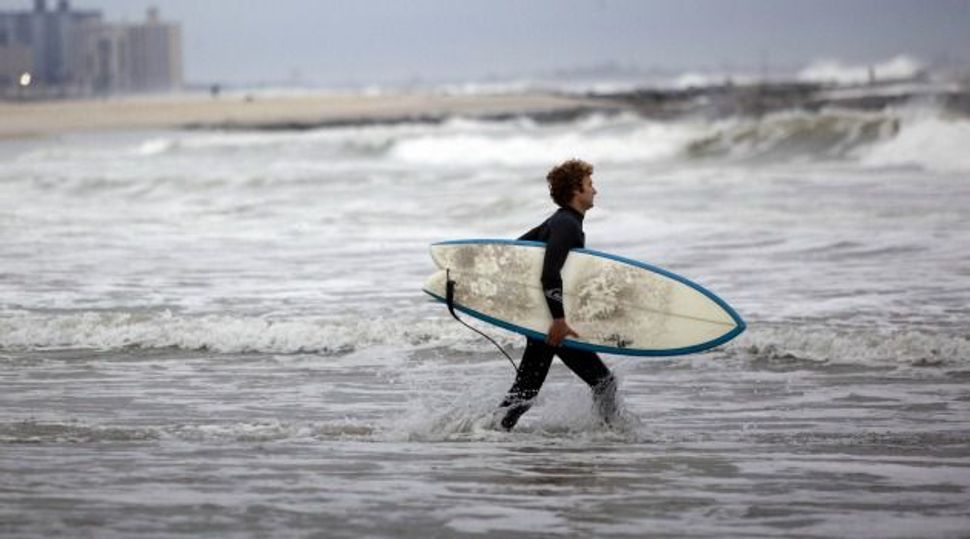 Evacuations were ordered in predominantly Jewish Brooklyn neighborhoods of Brighton Beach and Coney Island as Hurricane Sandy lumbered up the East Coast, shutting down subways and sending shoppers in a panic before she even makes landfall.

The oceanfront areas are in New York City’s so-called Zone A, along with Manhattan Beach, which city officials say are among the most likely to be inundated by the massive and slow moving storm.

“This evacuation is mandatory — it is for your own safety,” Mayor Michael Bloomberg said. “We’ve got to take some precautions today.”

Some 375,000 people live in the evacuation areas and were being told to leave even before a drop of rain falls.

The last major hurricane to hit the region was last year’s Hurricane Irene, which did its worst damage inland. A Holocaust survivor from Brooklyn died in the Catskills when her chalet was washed away by flood waters. A 5-year-old Jewish boy also killed by down power lines in Rockland County, N.Y.

Tens of millions of people all along the U.S. East Coast girded themselves on Sunday for Sandy, a gigantic storm forecast to assault the densely populated region with battering winds, dangerous flooding and even heavy snowfall.

Sandy, expected to come ashore late on Monday, could deliver a harsh blow to major cities in its target zone including New York, Philadelphia, Washington, Baltimore and Boston. Its center was forecast to strike New York-New Jersey area and then move inland toward Philadelphia and the rest of Pennsylvania.

The sheer size of the storm meant its effects would be felt from the mid-Atlantic states to New England. Officials warned of widespread power outages that could last for days.

In New York City, subway, bus and train service will be suspended on Sunday evening. Amtrak and other transit systems also planned to shut down.

Schools up and down the East Coast were shut down on Monday, even though the storm is not expected to make landfall until Monday night.

President Barack Obama, speaking after a briefing at the federal government’s storm response center in Washington, called Sandy a “serious and big storm” and asked residents to heed the orders of state and local authorities to protect themselves from its onslaught.

The storm could bring the country’s financial nerve center to a standstill, although the major Wall Street exchanges said they planned to open as usual on Monday because they have alternative facilities they can use.

Worried residents in the hurricane’s path packed stores, searching for generators, flashlights, batteries, food and other supplies in anticipation of power outages.

Gale-force winds were already starting to buffet Virginia and could reach other parts of the mid-Atlantic coast on Sunday night. Tens of millions of people will feel its bluster for as long as two days, Knabb said.

Forecasters said Sandy was a rare, hybrid “super storm” created by an Arctic jet stream wrapping itself around a tropical storm, possibly causing up to 12 inches (30 cm) of rain in some areas, as well as up to 2 feet (60 cm) of snowfall in the Appalachian Mountains from West Virginia to Kentucky.

It could be the largest storm to hit the United States, according to the National Oceanic and Atmospheric Administration’s (NOAA) website.

Sandy was already disrupting transportation systems. More than 700 flights, including international ones, were canceled on Sunday and nearly 2,500 more were canceled for Monday, FlightAware.com said.

New Jersey casinos were ordered to close and state officials decided to shut bus and rail systems by early on Monday.

Governors in other states put National Guard troops on alert. “We’re just asking people to be patient and be ready for a long haul. But we have a very aggressive power restoration program in place and I think we’re ready,” Virginia Governor Robert McDonnell told the CNN program “State of the Union.”

In Washington, Obama said officials had assured him that they had all the resources they needed in place, and he stressed that “it is important for us to respond big and to respond fast” to the hurricane’s onslaught.

“We’re going to cut through red tape and we’re not going to get bogged down in a lot of rules,” said Obama, who was having to juggle both is re-election bid and his efforts to stay on top of the storm’s impact just nine days before Election Day.

Sandy blew the presidential race off course, forcing Obama and Republican challenger Mitt Romney to cancel scheduled campaign stops. It fueled fears that the storm could disrupt early voting ahead of the Nov. 6 election.

U.S. stock exchanges and Wall Street banks were sending employees into Manhattan on Sunday to stay in hotels and co-workers’ homes, as markets prepared to open for business on Monday even as Sandy brought public transportation to a halt.

Insurers also prepared for the storm’s arrival, activating claims teams, staging adjusters near the locations most likely to be affected and generally getting ready to pay for a potentially huge volume of losses.

While Sandy’s 75 mph (120 kph) winds were not overwhelming for a hurricane, its exceptional width means the winds will last as long as two days, wearing down trees, roofs and buildings and piling up rainfall and storm surge.

Hurricane-force winds extended 175 miles (280 km) from the center of the asymmetrical storm, while its lesser tropical storm-force winds spanned 850 miles (1,368 km) in diameter.

At high tide, it could bring a surge of seawater up to 11 feet (3.4 meters) above ground level to Long Island Sound and New York Harbor, forecasters said.

“Given the large wind field associated with Sandy, elevated water levels could span multiple tide cycles, resulting in repeated and extended periods of coastal and bayside flooding,” the forecasters said.

Sandy was centered about 250 miles (400 km) southeast of Cape Hatteras, North Carolina, or 575 miles (930 km) south of New York City at midday on Sunday, the hurricane center said. It pushed seawater up over the barrier islands off North Carolina known as the Outer Banks.

“It’s flooded all over the village,” longtime Ocracoke Island resident Kathleen O’Neal told Reuters. “I would say between a foot and two feet of water.”

Sandy was moving over the Atlantic parallel to the U.S. coast at 10 mph (17 kph), but was forecast to make a tight westward turn toward the U.S. coast on Sunday night.

Sandy killed at least 66 people as it made its way through the Caribbean islands, including 51 in Haiti, mostly from flash flooding and mudslides, according to authorities.