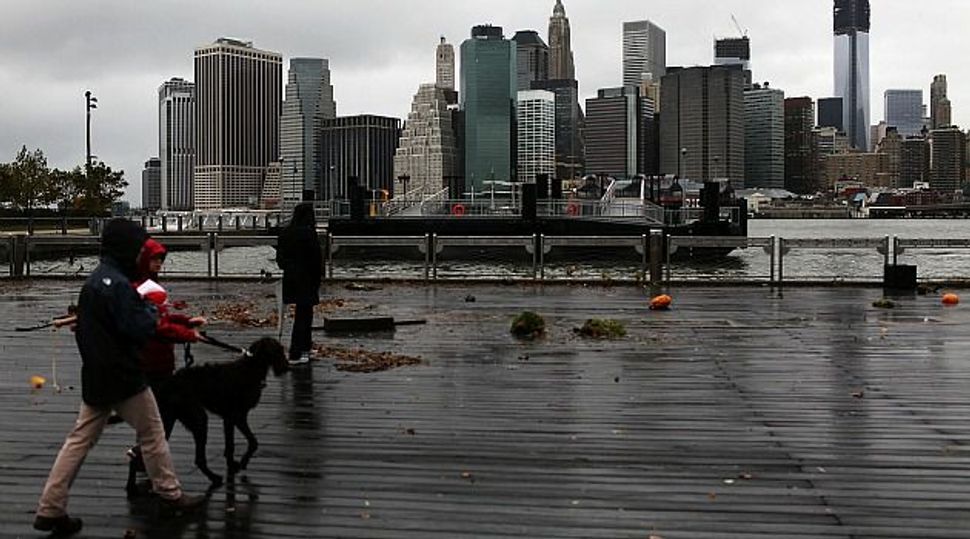 Battered: The record surge from Sandy swamped lower Manhattan as the massive storm wreaked havoc up and down the East Coast. Image by getty images

At least 15 people were reported killed in the United States by Sandy, one of the biggest storms to ever hit the country, which dropped just below hurricane status before making landfall on Monday night in New Jersey.

More than 1 million people in a dozen states were under orders to evacuate as the massive system plowed westward.

The storm interrupted the presidential campaign a week before Election Day and closed U.S. financial markets for two days.

Sandy, which was especially imposing because of its wide-ranging winds, brought a record storm surge of almost 14 feet (4.2 meters) to downtown Manhattan, well above the previous record of 10 feet (3 meters) during Hurricane Donna in 1960, the National Weather Service said.

Water poured into the subway system and tunnels that course under the city, raising concerns that the world’s financial capital could be hobbled for days.

“Hitting at high tide, the strongest surge and the strongest winds all hit at the worst possible time,” said Jeffrey Tongue, a meteorologist for the weather service in Brookhaven, New York.

Hurricane-force winds as high as 90 miles per hour (145 kph) were recorded, he said.

Large sections of New York City were without power, and transportation in the metropolitan area was at a standstill.

“In 108 years our employees have never faced a challenge like the one that confronts us now,” Metropolitan Transportation Authority Chairman Joseph Lhota said in a statement.

It could take anywhere from 14 hours to four days to get the water out of the flooded subway tunnels, the MTA said.

“The damage has been geographically very widespread” throughout the subway, bus and commuter train system, MTA spokesman Aaron Donovan said.

The unprecedented flooding hampered efforts to fight a massive fire that destroyed more than 50 homes in Breezy Point, a private beach community on the Rockaway barrier island in the New York City borough of Queens, the Fire Department of New York said.

Two people in New York City reportedly died in the storm – a man in a house hit by a tree and a woman who stepped into an electrified puddle of water. Two other people were killed in suburban Westchester County, north of New York City, and two others were reported killed on suburban Long Island.

A motor vehicle death in Massachusetts was blamed in part on the bad weather. Two other people were killed in Maryland in storm-related incidents, state authorities said, and deaths also were reported in Connecticut, New Jersey, Pennsylvania and West Virginia, CNN said.

More than 7 million people in several states were without electricity due to the storm, which crashed ashore late on Monday near the gambling resort of Atlantic City, New Jersey.

The storm was plowing westward over south-central Pennsylvania, still packing near hurricane-force winds as strong as 65 miles per hour (105 km per hour), the National Weather Service said.

“Overall, the worst has past,” Dickey said.

The storm’s wind field stretched from South Carolina north to the Canadian border and from West Virginia to a point in the Atlantic Ocean halfway to Bermuda, easily one of the largest ever seen, the National Hurricane Center said.

Three towns in New Jersey, just west of New York, were inundated with up to 5 feet (1.5 metres) of water after a levee on the nearby Hackensack River was overtopped or breached, officials said. Rescuers were using boats to aid the marooned residents of Moonachie, Little Ferry and Carlstadt.

In New York, a crane partially collapsed and dangled precariously from a 90-story luxury apartment building under construction in Midtown Manhattan.

Much of the city was deserted, as its subways, buses, commuter trains, bridges and airports were closed. Power outages darkened most of downtown Manhattan as well as Westchester County, affecting more than 650,000 customers, power company Consolidated Edison said.

“This is the largest storm-related outage in our history,” said John Miksad, Con Ed’s senior vice president for electric operations. The previous record was the more than 200,000 customers hit with outages last year during Hurricane Irene, the utility said.

Neighborhoods along the East and Hudson rivers in Manhattan were underwater, as were low-lying streets in Battery Park near Ground Zero, where the World Trade Center once stood.

A security guard at 7 World Trade Center, Gregory Baldwin, was catching some rest in his car after laboring overnight against floodwaters that engulfed a nearby office building.

“The water went inside up to here,” he said, pointing to his chest. “The water came shooting down from Battery Park with the gusting wind.”

One of the Con Ed workers pulled from the floodwater, Angelo Amato, said he was part of a crew who had offered to work through the storm.

“This is what happens when you volunteer,” he said.

With a week to go before the election, President Barack Obama and Republican challenger Mitt Romney canceled scheduled campaign events. Obama left the campaign trail to return to Washington to monitor the storm and Romney curtailed political events to show respect for the storm’s victims.

U.S. stock markets were set to be closed on Tuesday. They closed on Monday for the first time since the attacks of Sept. 11, 2001.

The federal government in Washington was closed for a second day on Tuesday, and schools were shut up and down the East Coast.