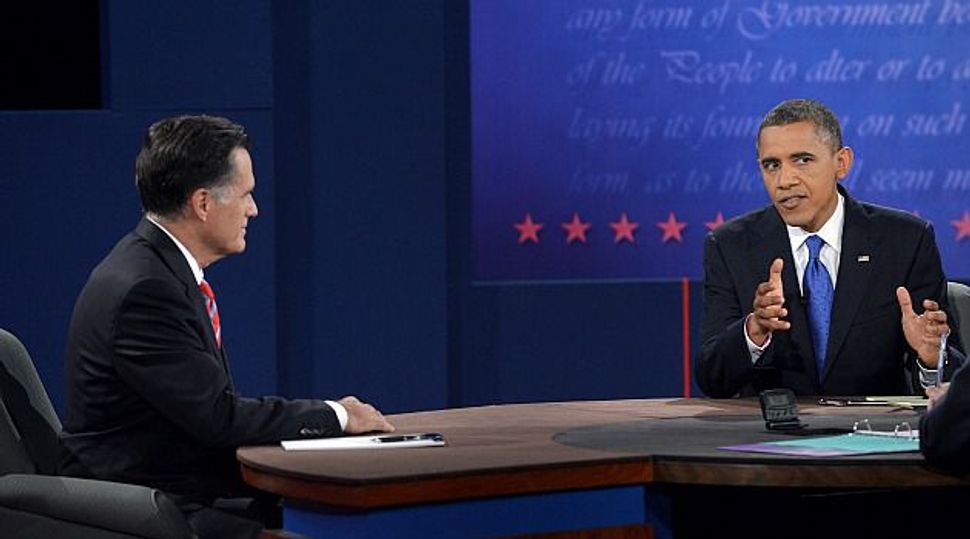 Most Israelis would be reassured if Mitt Romney won next week’s U.S. presidential election, feeling they had an unquestioning friend rather than a dispassionate critic in the White House.

But any change would probably be a question of style over substance, analysts say, with a Republican administration expected to follow the path already laid out by President Barack Obama when it comes to Iran and the Palestinians.

The allies are too joined at the hip on fundamental challenges for the head to make that much difference.

“There is a great deal of continuity in foreign policy,” said Zalman Shoval, a former Israeli ambassador to the United States and member of the ruling conservative Likud party. “Things don’t change overnight if a new president takes power.”

Obama, a Democrat, never enamoured himself to the Israeli people, nor to their prime minister, Benjamin Netanyahu.

The U.S. leader was accused of trying to browbeat Israel into making concessions to the Palestinians, particularly in his efforts to halt settlement-building in the occupied West Bank, and of refusing to impose red lines on Iran’s atomic project.

While Obama also oversaw ever-closer military ties between the two allies, Israelis remembered the perceived slights – such as his failure to find time to see Netanyahu when he flew to New York last month to address the United Nations.

He is also disparaged for not visiting Israel as president. There again, only four of the last 11 U.S. presidents managed to make the trip, with only two coming their first term.

A survey released on Sunday by Tel Aviv University showed Israeli Jews preferred Romney to Obama by almost a three to one margin – the inverse of the predicted American Jewish vote.

“There is clear daylight between the prime minister and the White House, and most Israelis believe that Obama deliberately wanted it that way,” said Ehud Yaari, an Israel-based fellow at the Washington Institute for Near East Policy.

“But there wouldn’t be much of a difference between (Obama and Romney) on the Palestinian conflict or even with the Iranian issue. The course of future U.S. policy is pretty much set.”

Romney has certainly tried to play up divergences with Obama over Middle East policy, repeatedly accusing his rival of throwing Israel “under a bus” and suggesting he would adopt a tougher line with the Iran’s powerful clerics.

But in their debate on foreign policy last week, the two men appeared in broad agreement on a range of issues, competing with each other to show their support for Israel and making clear it was by far their most important partner in a troubled region.

They also adopted a similar line on Iran – promising to prevent Tehran from getting nuclear weapons without mentioning the words “red line”, or committing to using military force.

“It is … essential for us to understand what our mission is in Iran, and that is to dissuade Iran from having a nuclear weapon through peaceful and diplomatic means,” Romney said.

Romney’s language was duly noted in Israel, even raising questions of whether a Republican administration, haunted by the Iraq-tattered legacy of former President George W. Bush, would have the stomach for a daunting new Middle East conflict.

According to that theory, if anyone is likely to send in the warplanes, it is the Democrat Obama, who has succeeded in convincing Russia and China to back tough sanctions on Iran and is viewed with less suspicion around the globe than Romney.

But Dore Gold, president of the Jerusalem Center for Public Affairs and a Netanyahu confidant, suggested that the sort of military mission often envisaged for Iran, centred on air power, would banish the ghosts of the Iraq quagmire.

“No one wants another war in the Middle East, but there is a huge difference between a major ground war with a commitment of troops that march into an Arab capital, and the spectrum of options that exist now. Some of them may involve just air assets or intelligence cooperation,” he said.

Whether or not there proves to be any substantive difference between the two presidential contenders in terms of core policy-making, there can be no doubt that the conservative Netanyahu would feel more comfortable dealing with the Republican Romney.

In his two terms as prime minister, Netanyahu has only ever dealt with Democratic presidents – first Bill Clinton and now Obama. He is often quoted as having said “I speak Republican” and his relations with Obama were at very best frosty.

“If Romney wins, (Netanyahu) will be in paradise. If it is Obama, it will be hell,” said one former aide, who worked alongside Netanyahu for a stretch of his second stint in office.

Whether by coincidence or design, the next U.S. president will be sworn in the day before an Israeli parliamentary election, with Netanyahu widely touted to win, meaning that the countries’ leaders will be in electoral lockstep.

Some Democrats have accused Netanyahu of interfering in the U.S. election by trying to coerce Obama into setting red lines for Iran. Palestinians hope that if he is re-elected he will get his own back by reviving the moribund peace process and put heavy pressure on Israel into making concessions over territory.

That is wishful thinking.

While Israel was mentioned 34 times in last week’s debate, the Palestinians won just one mention, underlining how far down the world agenda they have tumbled.

In a secretly recorded video at a fund-raising event in May, Romney said “the pathway to peace is almost unthinkable” and suggested his policy would be to “kick the ball down the field”.

After investing time and energy on the issue in his first term, and winning only animosity from both sides, Obama is unlikely to revisit the problem any time soon, said Aaron David Miller, a former senior U.S. adviser on the peace process.

“This whole notion that freed from political restraints the American president is going to go for some grandiose ambitious peace plan that will put him into conflict with the Israeli prime minister is the grandest of illusions,” he said.

Swept to the sidelines, the Palestinian leadership watched the foreign policy debate with a mix of gloom and anger.

“What we didn’t see in the debate was any sign of who has the backbone and foresight to bring about a just peace, and that’s what was needed,” said Hanan Ashrawi, an executive committee member of the Palestine Liberation Organisation.