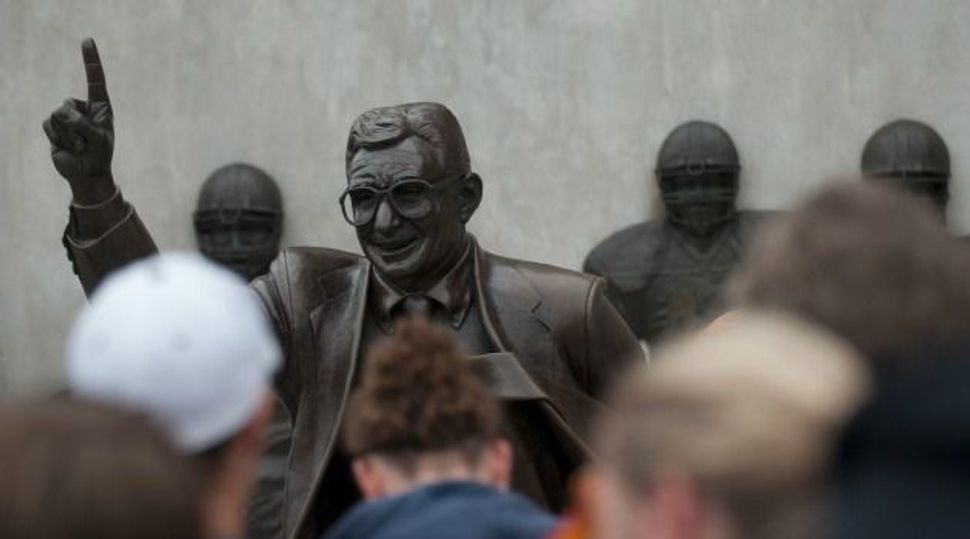 The highest-ranking Pennsylvania State University official charged in the explosive case, Spanier, 64, was accused of child endangerment, perjury and criminal conspiracy, all felonies. He also faces misdemeanor counts of failure to report suspected abuse, conspiracy and obstruction of the administration of law.

“This is not a mistake, an oversight or a misjudgment. This was a conspiracy of silence by top officials at Penn State, working to actively conceal the truth, with total disregard to the suffering of children,” Attorney General Linda Kelly told a news conference.

Two other officials, Athletic Director Tim Curley and retired Vice President Gary Schultz, also face new charges of child endangerment, criminal conspiracy and obstruction. They were charged in November 2011 with failure to report suspected abuse and perjury, and both have pleaded not guilty.

Sandusky, 68, a former assistant coach in Penn State’s powerhouse football program, was convicted in June of molesting 10 boys over a 15-year period in a scandal that rocked college sports and focused national attention on child sex abuse.

He was sentenced to 30 to 60 years in prison, effectively a life sentence.

Trustees fired Spanier and revered head football coach Joe Paterno in November 2011 in the wake of the charges against Sandusky. Paterno died in January of lung cancer.

The abuse included on-campus incidents in 1998 and 2001 that the three men discussed in detail, she said.

Kelly said a grand jury issued a subpoena in December 2010 but relevant emails and other evidence were not turned over until April 2012, after the three men had left their jobs.

Schultz kept a file about the 1998 and 2001 incidents involving Sandusky at his campus office and told staff members never to look in the file, Kelly said.

It was removed from the office on the day charges against Sandusky were announced and delivered to Schultz’s home.

The file’s existence, along with other information relevant to the grand jury investigation, was not disclosed until after Spanier was fired and trustees ordered full cooperation with the probe, she said.

Spanier, a family sociologist and former University of Nebraska-Lincoln chancellor, has been on sabbatical as a tenured professor since being fired as president. He now has been placed on leave effective immediately, Penn State said in a statement.

Timothy Lewis, an attorney for Spanier, rejected the charges as politically motivated. In an email, he said they were an attempt by Governor Tom Corbett to divert attention from his failure to warn about Sandusky.

Corbett, a Republican, was re-elected attorney general in 2008 but left the job when he was elected governor in 2010. He named Kelly to replace him, and a new attorney general will be elected on Tuesday. Kelly is not seeking office.

Daniel Filler, a law professor at Drexel University in Philadelphia, said prosecutors likely would argue that Spanier had covered up for Sandusky to protect the highly successful football program.

“I expect prosecutors will make the case that Spanier’s ticket was punched by the athletic program and he would be very protective” of it, he said.

Lawyers for Curley and Schultz did not immediately reply to requests for comment. Curley was placed on leave after the 2011 charges and his contract will not be renewed when it runs out in June 2013, Penn State said.