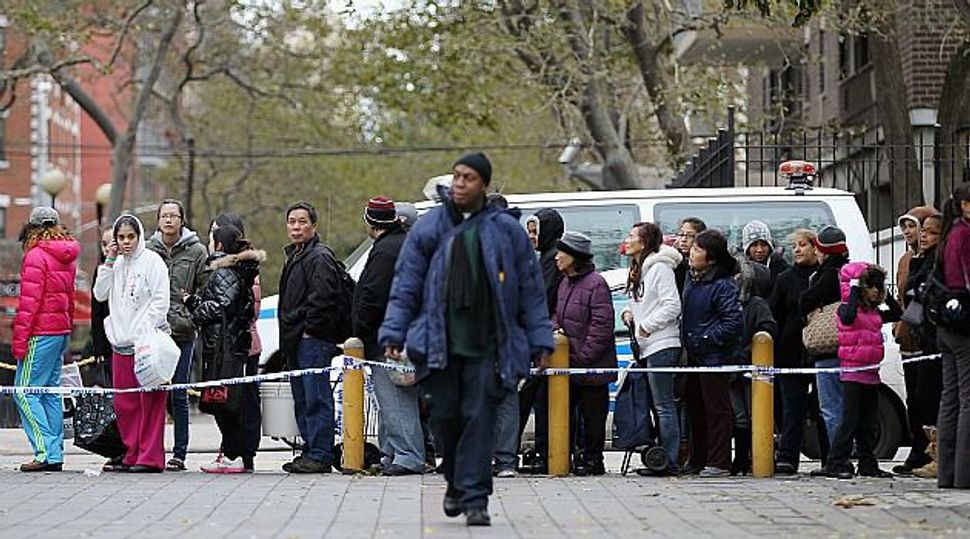 New York authorities have made a big push for normalcy after megastorm Sandy, but for many residents dealing with water-logged homes, power outages, gasoline shortages and painfully slow commutes, things are far from that.

Officials have moved quickly to try to jump-start business and tourism after the storm. The New York Stock Exchange reopened after a historic two-day closure, with a smiling Mayor Michael Bloomberg ringing the opening bell. The subways began to rumble with limited service on Thursday. Broadway theater is back. And the mayor has declared the New York Marathon will go on as scheduled on Sunday, despite calls by many to postpone it.

Still, inconveniences are mounting for many people, and news that some could have to wait more than another week for their power to be restored by Consolidated Edison Inc added to the misery. Anxiety is also rising as a fuel shortage left many without gasoline, leading to tense scenes and police patrols at gas stations throughout the region.

A rising death toll from the storm has also been unsettling for many – it has now reached at least 97 across the U.S. Northeast, with 39 of those in New York City. Officials said that it was likely to climb further as rescuers searched house-to-house in coastal towns.

Concern about crime is growing.

Viktoria Altman, 33, whose home in the Sheepshead Bay section of Brooklyn was flooded by the storm, said she was frustrated that there was little police presence in her neighborhood. The area has had widespread power outages.

She said she was concerned about accidents on streets where stoplights have been knocked out, saying drivers have been “flying through the intersections.” She also said she worried that homes in the darkened area could be a target for criminals.

“It feels like we’ve been abandoned here by the powers that be,” said Altman, who runs a children’s tutoring center.

The New York Police Department did not immediately respond to requests for comment on Thursday.

There have been some arrests for storm-related crime. More than 15 people in Queens have been charged with looting and one man was charged with threatening another driver with a gun as he tried to cut in on a line of cars waiting for gas, said Queens District Attorney Richard Brown.

Tara Hohenberger, who has been without power for days in the East Village of Manhattan, said her neighborhood feels “a little tense” and she wished there was a bigger police presence.

“I walked home from 91st Street last night and it’s scary once you get below the black-out zone,” she said.

New Yorkers are a tough bunch, of course, and the city made it through the shock and disruptions of the Sept. 11, 2001, attacks. This week, people dealing with minor hassles from the storm generally took them in stride, given the loss of life and devastating property damage some had suffered, but that didn’t mean they weren’t deeply frustrated with long waits at crowded bus stops or the loss of water supply as well as power in many apartment buildings.

Subways were running with limited service on Thursday, but many endured long commutes that involved detours on shuttle buses that inched along city streets. Traffic was still gridlocked in Midtown Manhattan. There was even talk that platoons of rats in the New York City subway system might emerge onto the streets after train tunnels were flooded in the storm. (There was no evidence of an invasion, however.)

Recovery experts said the early days of a disaster are critical in setting the tone for the public’s patience with what could be weeks or months of inconveniences.

Credible communication with the public from political leaders, utilities and others are especially important, said Debra Knopman, a vice president at the Rand Corp in Arlington, Virginia, and director of its division on justice, infrastructure and the environment.

“There is the near-term response measured in days and weeks and months, and then there is going to be another round of responses that will take place over the next several years,” she said. “Every coastal city in the world is going to be watching very closely about what happens in New York and how they reconstitute themselves.”

Indeed, New York officials, including Bloomberg and New York State Governor Andrew Cuomo, got generally high marks for their handling of the crisis brought on by Sandy – both for their aggressive warnings and evacuation plans ahead of the storm, and their regular updates in the aftermath.

While many people are suffering, some experienced few problems. With the subway running on selected lines, commutes for some were almost back to normal. And in Manhattan neighborhoods such as the Upper East and Upper West Side, which did not experience widespread power outages, one of the few changes was brought on by a massive influx of refugees from electricity-starved Lower Manhattan bunking with friends and family.

Still, New Yorkers aren’t known for their patience, and some storm-hit residents have had it.

Advertising creative director Chris Swift, 37, lost power in his apartment in Manhattan’s Chelsea neighborhood during the storm. By Thursday he was fed up and jumped on a bus to head to a hotel in Boston.

“I tried 20 hotels on foot as I couldn’t call them with no battery left on my phone, but they were all booked,” he said of his attempts to find alternate lodging in New York. “The thought of no communication, company, food or shower in my apartment made the $15 bus trip to Boston worth it.”