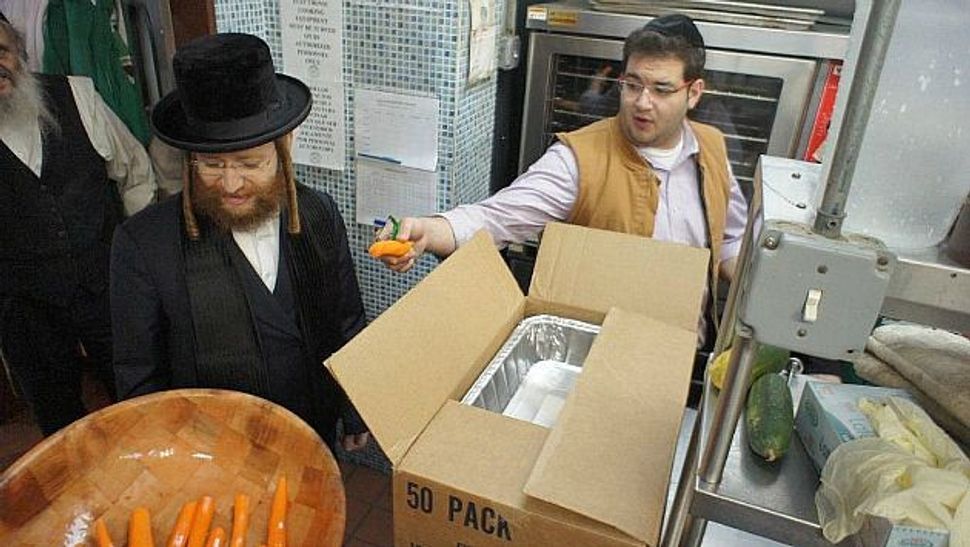 Just before Shelly Fine went to sleep Tuesday night, he posted his contact information and an appeal seeking volunteers for the Hurricane Sandy relief effort on a popular Upper West Side blog. When the 63-year-old woke up the next morning, he had 163 responses. Together with other volunteers, Fine is helping to orchestrate a grassroots effort to help out at the city’s local shelters.

“The response of the Jewish community up here has been amazing,” Fine told JTA. “Synagogues, organizations and individuals – everyone has been coming out to volunteer. We’ve been sending people with medical training around to the evacuation sites to make sure everyone is OK, people are showing up and handing out cooked food, fresh clothing and games for children.”

Fine is just one of a number of Jewish volunteers stepping up to bring relief to New Yorkers affected by Hurricane Sandy. Tens of thousands of residents across the five boroughs still have no heat and electricity after the storm ripped through the city earlier this week, tearing down trees, homes and power lines. Many residents evacuated to local shelters or, stuck inside their homes, were relying on volunteers to bring them food and supplies.

Uri L’Tzedek, an Orthodox social justice organization, hit the streets of New York City Wednesday to hand out food and supplies to those in need. After placing an announcement on Twitter and Facebook, some 45 volunteers showed up to distribute candles, batteries, flashlights, water and food.

“We brought just about every flashlight we could find, and eventually just stood on street corners and handed out water to anyone who needed,” said Uri L’Tzedek’s Yael Keller. “A lot of people approached us telling us about elderly people stuck on higher floors who needed company and supplies. We climbed stairs.”

In Brooklyn, Masbia, a network of kosher soup kitchens serving that usually provides 500 meals a day, has been making more than four times that number since the storm. The organization originally prepared to close its facilities ahead of the storm since many employees live in affected neighborhoods. But Masbia’s executive director, Alexander Rapaport, told JTA that after receiving several calls from shelters in need of food, he gathered a team of volunteers and has been working around the clock to provide meals to thousands of people in three public shelters in Brooklyn and Queens.

“We’ve been sending most of our meals to the seniors evacuated to Park Slope Armory, which is part of the government’s evacuation plan,” Rapaport said. “There were hundreds of people being bused in, on stretchers and in wheelchairs. We usually aren’t equipped to make this much food, but we’ve had a lot of volunteers. People understand the sense of urgency to help these older people.”

Rapaport said that Masbia was particularly concerned about the food seniors at shelters were eating. Shelters were providing military-grade food rations, he said, describing the offerings as “lasagna meets chulent” that were high in sodium.

Rapaport said that Masbia had recently received a large shipment of fresh fish that it would bring to the shelters. “It’s low in sodium and much healthier for the older people,” he said.

Meanwhile, on the Lower East Side, students from Yeshiva University went on foot to the area’s public housing units, handing out water, flashlights, batteries, fruit and dried snacks. Volunteers were organized by students, and the supplies came from the student government’s own budget.

“The student response has been great,” said Margot Reinstein, the student council president at Yeshiva’s Stern College for Women, as she lugged a case of water bottles down Cherry Street. “We all felt really lucky that the storm didn’t affect our families the way it did down here. People with Uri L’Tzedek told us there are some buildings here with seniors on life support who are stuck. No heat, no electricity, no way of getting out.”

Many Jewish organizations set up relief funds online to funnel money to communities impacted by the hurricane. UJA-Federation of New York collected hundreds of challahs that it planned to distribute Friday in advance of Shabbat. Butterflake, a popular kosher bakery in New Jersey, donated over 300 challahs to the effort.

Occupy Judaism, a group of Jewish supporters of Occupy Wall Street, has been live-blogging volunteer opportunities around the city on its Facebook page. Other organizations like Chabad Young Professionals and JCorps, a Jewish social volunteering group, also sent volunteers to hundreds of apartments in Lower Manhattan with supplies.

The Union for Reform Judaism, in addition to setting up its own relief fund, worked on relocating bar and bat mitzvah services from towns that didn’t have power to other Reform synagogues that do, and is also providing insurance specialists to help with filing insurance claims.