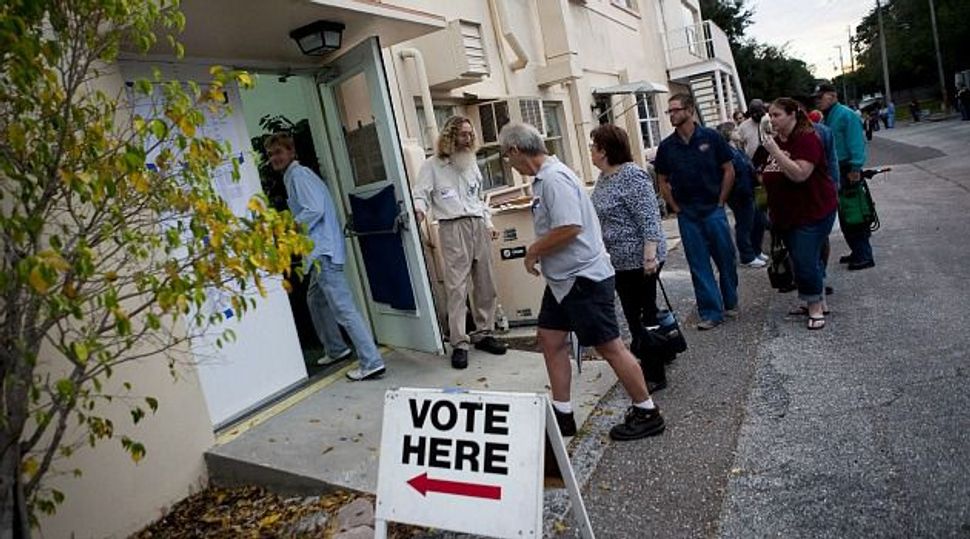 At about 10 a.m. on Election Day, a black sedan pulled up to the polling station at the J.C. Mitchell Elementary School.

“He threw Israel under the bus,” said the car’s driver, a chatty silver-haired man, as he helped an elderly woman from the back seat.

“You vote your way and I’ll vote mine,” she replied, her eyes rolling as he set up her walker and oxygen tank and steered her toward the entrance. “I’m voting for the president.”

Little could better encapsulate the drama unfolding among Jewish voters here in South Florida as the final day dawned on what has been a bitter presidential campaign pitting the Democratic incumbent, Barack Obama, against Republican Mitt Romney.

As in past elections, the bulk of the Sunshine State’s more than 600,000 Jews are expected to support the Democrat. But Republicans have shelled out millions to peel off some of that support – mainly by impugning the president’s record on Israel – and on the eve of Election Day they were brimming with confidence.

“We’re gonna win,” said Sid Dinnerstein, the Republican Party chairman in Palm Beach County, where as of late October, registered Democrats outnumbered Republicans by more than 100,000. “My Christian friends say to me, ‘How could even 1 percent of Jewish people vote for this guy?’ ”

For Obama and Romney, Florida is a big prize. According to a New York Times analysis, if Obama wins here, Romney has to sweep all the other battleground states to pass the 270-vote threshold necessary to win the Electoral College and the presidency.

In 2008, Obama won here by less than 3 percentage points, but he won support from approximately three-quarters of Florida Jewish voters, the bulk of whom reside in the state’s three most populous counties – Miami-Dade, Broward and Palm Beach. An American Jewish Committee survey in September found 69 percent of Jewish registered voters in Florida backing the president, with 25 percent for Romney and the rest undecided.

At the Bagel Tree cafe in Delray Beach, there was little evidence to suggest that the president had lost his strong support among the state’s Jews.

“If Romney gets in, he will not be president, he will be king,” said Sandy Richter, who was sipping coffee with four friends, all of whom were supporting Obama. “He’s a tyrant.”

Across the restaurant, a parallel group of five men finishing their lunch said that they, too, were supporting the president.

The Bagel Tree is located next to the large and overwhelmingly Jewish King’s Point retirement community, the residents of which Dinnerstein called “the most hardcore liberal Jews, maybe in America.” Only one patron on Tuesday admitted to supporting Romney.

“I have eight great-grandchildren in Israel,” said the Romney backer, a woman who declined to give her name but identified herself as pro-choice on abortion and as a Medicare beneficiary. “Obama sat for 20 years in his church with that Rev. Wright. And I feel – I mean I know – he’s an Arab lover.”

Such sentiments, however, were rare – or at least rarely voiced – among the Jewish Floridians who were interviewed. Still, for all the solid Jewish backing of the president, there was a palpable lack of enthusiasm for the candidate who electrified the country four years ago with his talk of hope and change.

Even many of the Obama backers agreed with Dinnerstein’s prediction that the president would fall short of the level of Jewish support he enjoyed in 2008. In interviews Tuesday with more than a dozen Jewish voters, Obama was not infrequently described as the lesser of two evils.

“I voted against Romney,” Victor Barth said. “I don’t think we had too much of a choice. I took the better of the two evils.”

Barth and his wife, Rhoda, cast their votes for Obama on Tuesday afternoon at Temple Emeth, a Conservative congregation in Delray Beach located barely a mile from a mammoth billboard showing an Iranian missile aimed squarely at Israel. The caption: “Friends don’t let friends get nuked. Stop Obama.”

“Terrible,” Rhoda Barth said. “It is shameful. It should not be up there.”

“My biggest problem with both parties is the money they spent on this campaign could have floated a Third World country,” Victor Barth said. “It’s a crime.”

Jewish Obama supporters tended to emphasize Obama’s stands on social issues – notably abortion rights and gay rights – as well as his policies toward the poor while dismissing charges that the president has been insufficiently committed to the security of Israel. Romney’s Jewish supporters talked mainly about the Republican’s commitment to Israel and, secondarily, his ability to steer the economy out of the doldrums.

Debbi Klarberg, a Boca Raton resident who described herself as “very pro-Israel,” said she had some reservations about the president on that front – but not enough to change her vote.

“Basically his values represent who I am as a person,” she said. “I guess my beliefs are more in line with Democratic values.”

Orthodox Jews, however, appear more inclined to back Romney over the president, polling suggests. Orthodox voters are believed to have given a majority of their votes to the Republican nominees in the previous two presidential elections.

At a kosher restaurant Monday night in Boca Raton, three Orthodox patrons said they were supporting Romney, largely because of Israel.

“I’m voting for Romney, I’m not hiding it,” said a woman who declined to give her name. “The main thing is Romney is better for Israel than Obama is.”

Eytan Marcus, an Orthodox critical care physician who spent part of his childhood in Israel, said there was little difference substantively between Obama and his predecessors on support for the Jewish state. Rather it was Obama’s subtle favoring of the Arab states that he feared had emboldened them politically.

“He’s enabled the Arab nations,” Marcus said. “He didn’t do anything for Israel, but he strengthened the Arabs. It tips the balance.”

Republicans have hammered the president on the issue of Israel in billboards, print advertisements, mailings and robocalls that seem to have disgusted and fatigued Jewish voters of all persuasions. Even cellphone numbers haven’t been immune this year. And perhaps more pertinent, many voters claim to be ignoring the persuasion efforts.

“I had to take the phone off the hook, I had to turn off the answering machine weeks ago,” said one Jewish voter in Boca, who nevertheless expressed regret that it had cost her the thrill of having Barbra Streisand’s voice on her machine. Streisand is one of several celebrities who recorded calls on behalf of Obama.

As the final day of voting rolled around – Floridians had more than a week to cast their ballots this year – there was a palpable sense of relief that the end was finally in sight. At the Bagel Tree, nearly everyone had cast their votes prior to the actual Election Day. There was one exception, though.