Gaza Crisis Not Over, Israel Warns 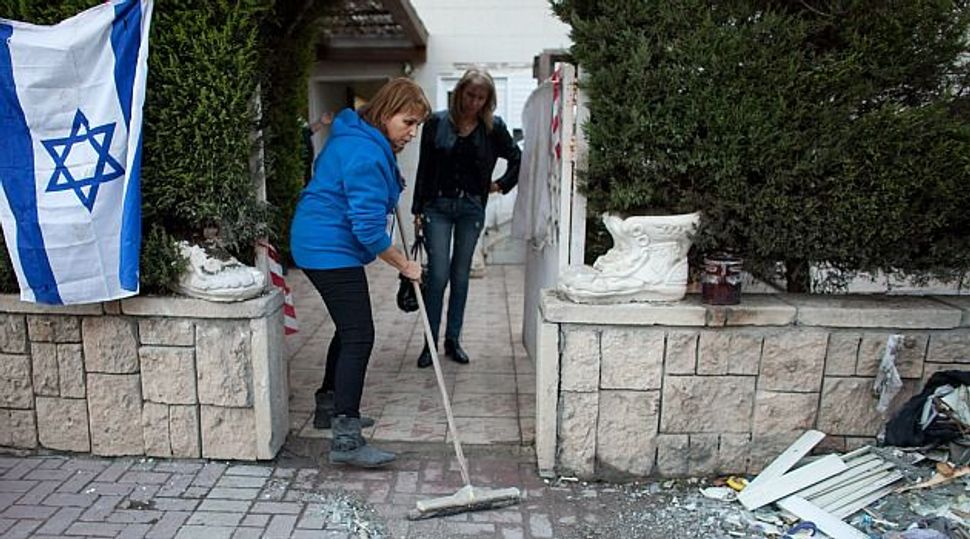 Cleaning Up: Israelis clean up after latest rocket attacks from Gaza. Image by getty images

Israel struck three targets in the Gaza Strip in the early hours of Tuesday and warned an on-going crisis with Palestinian militants had not been resolved, despite a marked decrease in rocket-fire from the territory.

The Israeli military said its warplanes successfully hit a weapons storage facility in central Gaza and two rocket launching sites in the north of the coastal enclave. No casualties were reported following the loud, pre-dawn blasts.

Palestinian militants indicated they were ready for a truce with Israel late on Monday, and only one rocket strike was reported in Israel by 10.00 a.m. (0800 GMT) on Tuesday.

“The matter has definitely not ended and we will decide how and when to act at the time when there will be a need,” he said after meeting regional military commanders.

“I do not want to talk about the time or the means because it would not be right to allow the other side to have this information,” he added.

Israeli Prime Minister Benjamin Netanyahu has convened a meeting of his inner circle of nine senior ministers later on Tuesday to decide what action to take, aware that public opinion is pushing for an end to the regular Gaza flare-ups.

He discussed possible attack scenarios with Barak and military chief Lieutenant General Benny Gantz on Monday night and some ministers have said the airforce may return to a policy of targeted killings of senior Islamist leaders in Gaza.

Eight Israelis were wounded by the Palestinian rocket fire.

Leaders of Hamas met officials from the Islamic Jihad and other groups on Monday and said they would respond in future according to how Israel acted – a formulation they have used previously to signal their readiness for a ceasefire.

Israel has shown little appetite for a new Gaza war, which could strain relations with the new Islamist-rooted government in neighbouring Egypt. The countries made peace in 1979.

But Netanyahu will be reluctant to seem weak ahead of a Jan. 22 election that opinion polls currently predict he will win.

Hamas refuses to recognise Israel’s right to exist. It fought a three-week war with Israel in 2008-2009 in which some 1,400 Palestinians and 13 Israelis died.

Gaza Crisis Not Over, Israel Warns