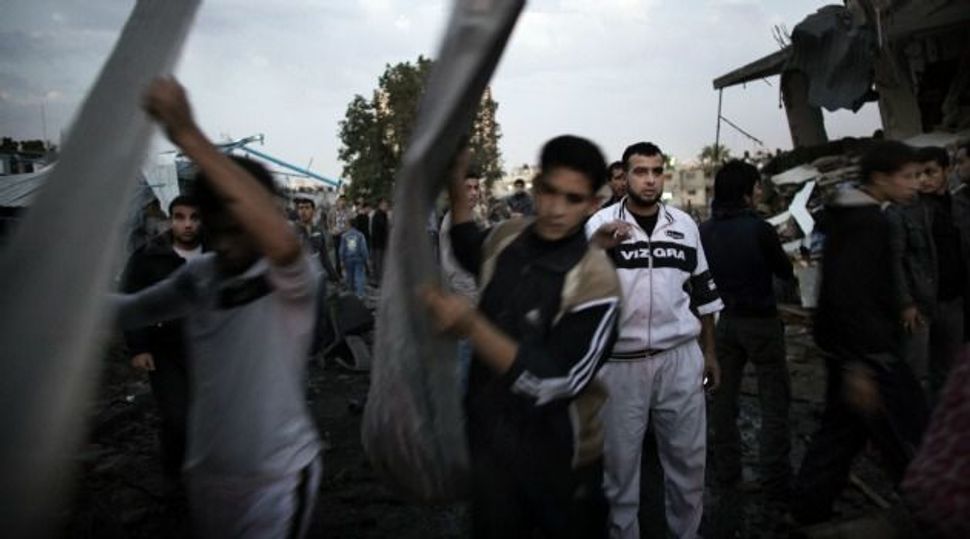 Death and Chaos: Palestinians scramble to clear rubble from wreckage of Hamas leaders home after it was hit by Israeli air strike. Image by getty images

Israeli warplanes struck Gaza militants for a fifth straight day on Sunday and its military prepared for a possible ground invasion, though Egypt saw “some indications” of a truce ahead.

Forty-seven Palestinians, about half of them civilians, including 12 children, have been killed in Israel’s raids, Palestinian officials said. More than 500 rockets fired from Gaza have hit Israel, killing three people and injuring dozens.

Israel unleashed its massive air campaign on Wednesday, killing a leading militant of the Hamas Islamist group that controls Gaza and rejects Israel’s existence, with the declared goal of deterring gunmen in the coastal enclave from launching rockets that have plagued its southern communities for years.

The Jewish state has since launched more than 950 air strikes on the coastal Palestinian territory, targeting weaponry and flattening militant homes and headquarters.

The raids continued past midnight on Sunday. One targeted a building in Gaza City housing the offices of local Arab media, wounding three journalists from al Quds television, a station Israel sees as pro-Hamas, witnesses said.

Two other predawn attacks on houses in the Jebalya refugee camp killed one child and wounded 12 other people, medical officials said.

“This round of confrontation will not be the last against the Zionist enemy and it is only the beginning.”

The masked gunman dressed in military fatigues insisted that despite Israel’s blows Hamas “is still strong enough to destroy the enemy.”

An Israeli attack on Saturday destroyed the house of a Hamas commander near the Egyptian border.

Casualties there were averted however, because Israel had fired non-exploding missiles at the building beforehand from a drone, which the militant’s family understood as a warning to flee, and thus their lives were spared, witnesses said.

Israeli aircraft also bombed Hamas government buildings in Gaza on Saturday, including the offices of Prime Minister Ismail Haniyeh and a police headquarters.

Among those killed in air strikes on Gaza on Saturday were at least four suspected militants riding motorcycles, and several civilians including a 30-year-old woman.

Israel said it would keep schools in its southern region shut on Sunday as a precaution to avoid casualties from rocket strikes reaching as far as Tel Aviv and Jerusalem in the past few days.

Israel’s “Iron Dome” missile interceptor system destroyed in mid-air a rocket fired by Gaza militants at Tel Aviv on Saturday, where volleyball games on the beach front came to an abrupt halt as air-raid sirens sounded.

Hamas’ armed wing claimed responsibility for the attack on Tel Aviv, the third against the city since Wednesday. It said it had fired an Iranian-designed Fajr-5 at the coastal metropolis, some 70 km (43 miles) north of Gaza.

In the Israeli Mediterranean port of Ashdod, a rocket ripped into several balconies. Police said five people were hurt.

Israel’s operation has drawn Western support for what U.S. and European leaders have called Israel’s right to self-defence, but there was also a growing number of calls from world leaders to seek an end to the violence.

British Prime Minister David Cameron “expressed concern over the risk of the conflict escalating further and the danger of further civilian casualties on both sides,” in a conversation with Israeli Prime Minister Benjamin Netanyahu, a spokesperson for Cameron said.

The United Kingdom was “putting pressure on both sides to de-escalate,” the spokesman said, adding that Cameron had urged Netanyahu “to do everything possible to bring the conflict to an end.”

Ben Rhodes, a deputy national security adviser to President Barack Obama, said the United States would like to see the conflict resolved through “de-escalation” and diplomacy, but also believes Israel has a right to self-defense.

Egyptian President Mohamed Mursi said in Cairo as his security deputies sought to broker a truce with Hamas leaders, that “there are some indications that there is a possibility of a ceasefire soon, but we do not yet have firm guarantees.”

Egypt has mediated previous ceasefire deals between Israel and Hamas, the latest of which unraveled with recent violence.

A Palestinian official told Reuters the truce discussions would continue in Cairo on Sunday, saying “there is hope,” but it was too early to say whether the efforts would succeed.

In Jerusalem, an Israeli official declined to comment on the negotiations. Military commanders said Israel was prepared to fight on to achieve a goal of halting rocket fire from Gaza, which has plagued Israeli towns since late 2000, when failed peace talks led to the outbreak of a Palestinian uprising.

Diplomats at the United Nations said Secretary-General Ban Ki-moon is expected to visit Israel and Egypt in the coming week to push for an end to the fighting.

Israel, though, with tanks and artillery positioned along the frontier, signalled it was still weighing a possible ground offensive into Gaza.

Israeli cabinet ministers decided on Friday to more than double the current reserve troop quota set for the Gaza offensive to 75,000 and around 16,000 reservists have already been called up.

Asked by reporters whether a ground operation was possible, Major-General Tal Russo, commander of the Israeli forces on the Gaza frontier, said: “Definitely.”

Another senior commander briefing reporters on condition of anonymity said Israel had scored “good achievements” in striking at nearly 1,000 targets, with the aim of ridding Hamas of firepower imported from Libya, Sudan and Iran.

A possible move into the densely populated Gaza Strip and the risk of major casualties it brings would be a significant gamble for Netanyahu, favourite to win a January national election.

Hamas fighters are no match for the Israeli military. The last Gaza war, involving a three-week Israeli air blitz and ground invasion over the New Year’s period of 2008-09, killed over 1,400 Palestinians, mostly civilians. Thirteen Israelis died in the conflict.

But the Gaza conflagration has stirred the pot of a Middle East already boiling from two years of Arab revolution and a civil war in Syria that threatens to spread beyond its borders.

One major change has been the election of an Islamist government in Cairo that is allied with Hamas, potentially narrowing Israel’s manoeuvring room in confronting the Palestinian group. Israel and Egypt made peace in 1979.