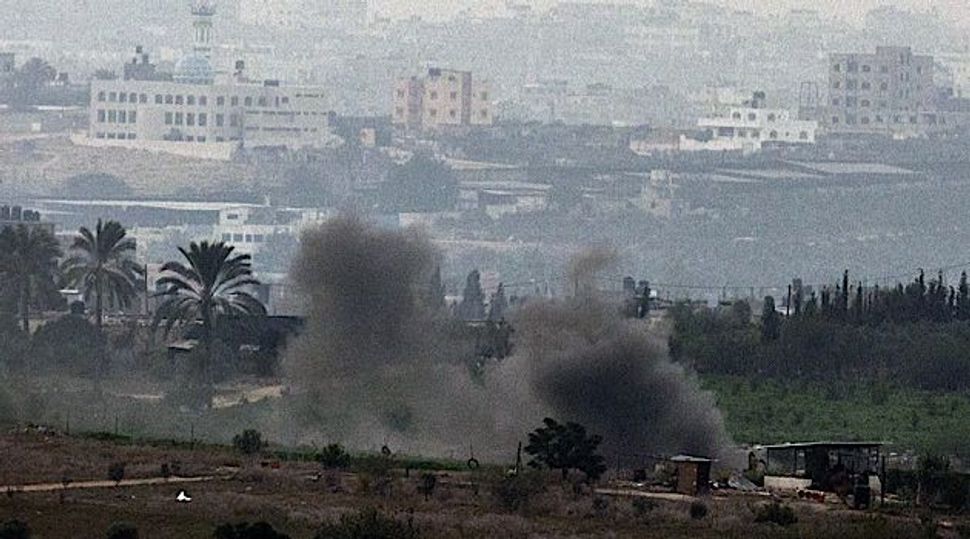 As Prime Minister Benjamin Netanyahu weighs whether to agree a truce with Hamas or send the Israeli army into Gaza, a bomb on a bus in Tel Aviv on Wednesday may sway reluctant national opinion behind a ground invasion.

“The time for restraint is over,” said Deputy Speaker Danny Danon of Netanyahu’s rightwing Likud party, after a blast that wounded 20 bus passengers and shocked a city just getting used to the idea of being in rocket range of the Gaza Strip.

“We must declare war on the terrorists wherever they may be,” Danon said.

A weekend poll by the daily Haaretz showed only 30 percent of Israelis supported invading the Palestinian enclave, though 84 percent back the week-old air force offensive against Hamas and other Islamist groups firing rockets at Israel.

That poll was before the bus bomb.

“We have to stop all these attacks, all this rocket fire. I would say we should wipe Gaza off the map, that’s where all the trouble comes from,” said Aliza Danino, 53, at a Jerusalem bus stop. “They should be wiped off the face of the earth.”

However, some Israelis were still leery of a full-scale invasion involving thousands of conscript soldiers and reserves.

“Definitely not,” said Ruth Barzilai, strolling by Jaffa port. “There are 75,000 reservists, with let’s say a family of four. That makes half a million people who will be in agony.”

“No,” said a middle-aged manager called Koby. “There would be too much risk, for us, and for them.”

More than 140 Palestinians have been killed in eight days of Israeli air strikes and five Israelis by rockets.

Israelis weren’t waiting for a police investigation to uncover who planted the explosives that wounded 15 bus passengers, three seriously, in the heart of their metropolis.

“This was a terrorist attack,” said a Netanyahu aide.

Hamas swiftly praised the bombing as a “natural response to the Israeli massacres” in Gaza. A Hamas spokesman, however referred to it as a “martyrdom operation”, assuming it was a suicide attack, which Israeli police said it was not.

NO FAITH IN CEASEFIRES

In southern Israel, which suffered alone through years of sporadic rocket attacks before Hamas dramatically brought Tel Aviv and Jerusalem into rocket range last week, many would like the army to go in and “finish the job”.

It was for these people, about one million Israelis, that Netanyahu says he launched Operation Pillar of Defence last Wednesday, well before Hamas proved it could threaten the three million living in greater Tel Aviv.

This swathe of sandy farmland and small towns lying just east of the 40 km (25 mile) long Gaza Strip enjoyed no real peace and security even after Israeli forces invaded Gaza in January 2009 at the climax of Operation Cast Lead.

Nor did Gaza, frequently targeted by Israeli air strikes in a cycle of low-level violence and reprisal.

An armoured invasion force is now ranged along key points of the border, tanks pointed at Gaza awaiting orders. Hamas warns that the Israelis will take a lot more casualties than in Cast Lead, when 10 soldiers were killed, four by friendly fire.

“It will not always be easy but the ability exists and when you go forward, go in, look back once and see what you are doing it for – Sderot, Ofakim and other villages – and from that point look only forward.”

Some in the southern towns say the only solution is the surrender or disarmament of the militants in the blockaded coastal strip where 1.7 million Palestinians live, most of them refugees from Israel’s creation in 1948 and their descendants.

“Since the last day of Operation Cast Lead (January 18, 2009) until the first day of Operation Pillar of Defense, the Gaza Hamas regime launched 2,000 aerial attacks against Israel,” writes Noam Bedein of the Sderot media centre.

“Truce with Hamas amounts to ‘we cease, they fire’.”

But many Israelis fear that a ground operation in crowded Gaza and the high civilian casualties it is likely to cause could provoke more bombing attacks in their big cities.

Israel would also face international condemnation as it did in 2009 from countries which say it uses disproportionate force against a weaker enemy.

“Once again this war is two months before an election,” said Tali Hayat, in Jaffa, referring to Cast Lead which also preceded a national poll. “Is it possible this is a coincidence?”

Netanyahu is favourite to win re-election on January 22. But any painful outcome of a high-risk incursion into Gaza could shift opinion. This is his first war as Israel’s leader.