Bibi: We’ll Give Truce a Chance 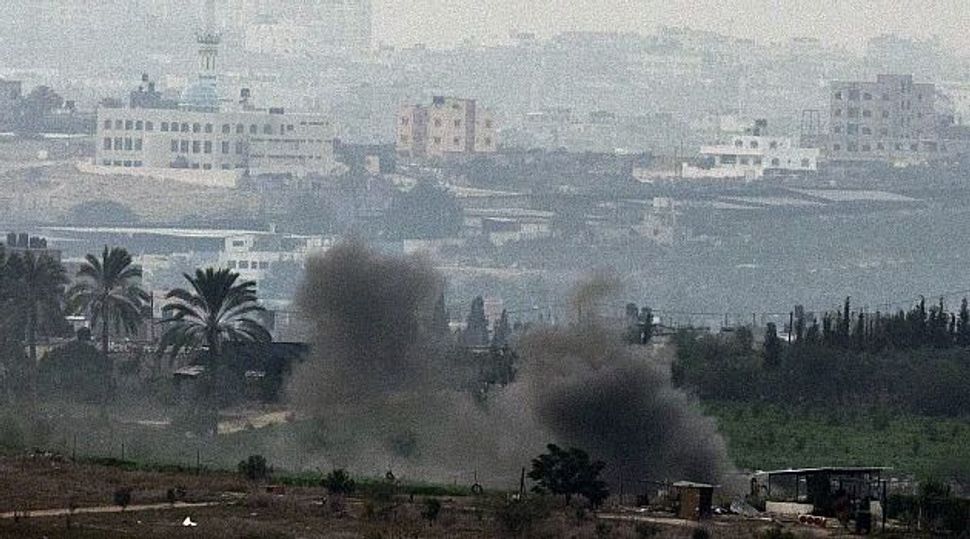 Give It a Chance: Israel and Hamas have agreed to a truce to end fighting in Gaza, sources on both sides say. Image by getty images

Israeli Prime Minister Benjamin Netanyahu told President Barack Obama on Wednesday he was ready to give a ceasefire with Hamas militants a chance, his office said in a statement.

Egypt announced earlier that Israel and Hamas had agreed to a ceasefire to end eight days of fighting in the Gaza Strip that has killed more than 140 Palestinians and five Israelis.

“(Netanyahu) spoke a short while ago with President Barack Obama and agreed to his recommendation to give the Egyptian ceasefire proposal a chance, and in this way provide an opportunity to stabilise the situation and calm it before any more forceful action would be necessary,” an Israeli statement said.

Obama commended Netanyahu for agreeing to the Egyptian government’s ceasefire plan in the Middle East, the White House said.

Israel and Hamas agreed on Wednesday to a ceasefire brokered by Egypt to end eight days of fighting in the Gaza Strip that has killed more than 140 Palestinians and five Israelis.

“The president expressed his appreciation for the Prime Minister’s efforts to work with the new Egyptian government to achieve a sustainable ceasefire and a more durable solution to this problem,” a White House statement said.

Obama reiterated his commitment to Israel’s security and also said he was committed to seeking funds for joint missile defense programs. Israel and Hamas agreed on Wednesday to a ceasefire brokered by Egypt on the eighth day of intensive Israeli fire on the Gaza Strip and militant rocket attacks out of the enclave, Israeli, Palestinian and Egyptian sources said.

First word of the truce came from a Palestinian official who has knowledge of the negotiations in Cairo, where U.S. Secretary of State Hillary Clinton was also pursuing peace efforts.

Asked whether a ceasefire deal had been reached, an Egyptian official in Cairo said: “Yes, and Egypt will announce it.”

Israeli sources said Israel had agreed to a truce, but would not lift its blockade of the Palestinian territory, which is run by the Islamist Hamas movement.

All the sources declined to be named or to give further details of the arrangements hammered out in Cairo.

More than 140 Palestinians and five Israelis have been killed in the fighting that began last Wednesday.

The ceasefire, if confirmed, was forged despite a bus bomb explosion that wounded 15 Israelis in Tel Aviv earlier in the day and despite more Israeli air strikes on the Gaza Strip.

After talks in Ramallah with Palestinian President Mahmoud Abbas, Clinton held a second meeting with Israeli Prime Minister Benjamin Netanyahu before travelling to Egypt for discussions with Mursi, whose country has led mediation efforts.

In Tel Aviv, targeted by rockets from Gaza that either did not hit the city or were shot down by Israel’s Iron Dome interceptor system, 15 people were wounded when a bus was blown up near the Defence Ministry and military headquarters.

The blast, which police said was caused by a bomb placed on the vehicle, touched off celebratory gunfire from militants in Gaza and had threatened to complicate truce efforts. It was the first serious bombing in Israel’s commercial capital since 2006.

In Gaza, Israel struck more than 100 targets, including a cluster of Hamas government buildings, in attacks that medical officials said killed 10 people, among them a 2-year-old boy.

Israel’s best-selling Yedioth Ahronoth newspaper had reported an emerging outline of a ceasefire agreement that called for Egypt to announce a 72-hour ceasefire followed by further talks on long-term understandings.

Under the proposed document, which the newspaper said neither party would be required to sign, Israel would hold its fire, end attacks against top militants and promise to examine ways to ease its blockade of Gaza, controlled by Hamas Islamists who do not recognise the Jewish state’s right to exist.

Hamas, the report said, would pledge not to strike any Israeli target and ensure other Palestinian factions in the Gaza Strip also stop their attacks.

Israel has carried out more than 1,500 strikes since the offensive began with the killing of a top Hamas commander and with declared aim of deterring Hamas from launching rocket attacks that have long disrupted life in its southern towns.

Medical officials in Gaza said 146 Palestinians, more than half of them civilians, including 36 children, have been killed in Israel’s offensive. Nearly 1,400 rockets have been fired into Israel, killing four civilians and a soldier, the military said.

Bibi: We’ll Give Truce a Chance