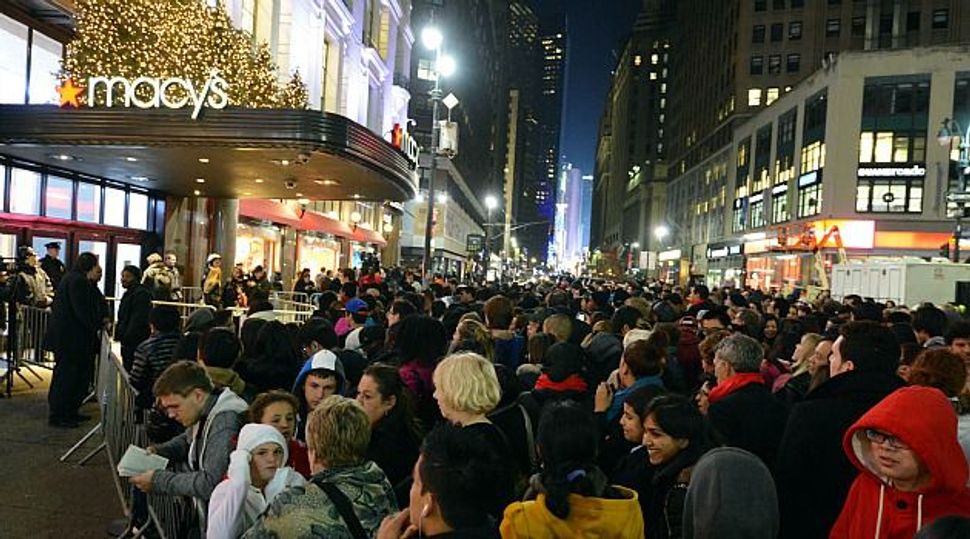 The Black Friday shopping frenzy kicked off at a more civilized hour, with shoppers welcoming decisions by retailers such as Target Corp and Toys R Us Inc to move their openings to Thursday night.

They also seemed to show little concern that the U.S. economy could be pushed over a “fiscal cliff,” if a combination of tax hikes and spending cuts take effect in January. Economists worry that unless U.S. President Barack Obama and Congress don’t agree on a plan, the economy could fall into another recession.

The National Retail Federation expects sales during the holiday season to grow 4.1 percent this year, not as strong as last year.

“I think spending is better for the economy. I think you should spend. If you save all your money that will only make it worse,” said Saiful Islam, 21, a New York accounting student who stood in line at Best Buy to purchase a television, a laptop and a PlayStation. “The line is bad, but the deals are good.”

According to a Reuters/Ipsos poll, two-thirds of shoppers were planning to spend the same amount of money as last year or were unsure about spending plans, while 21 percent intended to spend less, and 11 percent planned to spend more.

“I definitely have more money this year,” said Amy Balser, 26, at the head of the line outside the Best Buy store in the Mall of America in Bloomington, Minnesota. “I definitely don’t think (the economy) has bounced back anywhere near as much as it needs to, but I see some improvement,” she said.

Across the country, store lines were long – in the hundreds or more in many places – though the move toward earlier opening hours appeared to have helped.

While the shift was denounced by store employees and traditionalists because it pulled people away from families on the U.S. Thanksgiving holiday, many shoppers welcomed the chance to shop before midnight or in the early morning hours.

“I think it’s better earlier. People are crazier later at midnight,” said Renee Ruhl, 52, a hotel worker, at a Target store in Orlando, Florida, where she was already heading to her car with an air hockey game in her shopping cart 2-1/2 hours before the chain opened last year.

Others were not as happy with an earlier Black Friday.

A petition asking Target to “save Thanksgiving” had 371,606 supporters as of Thursday afternoon..

Some workers used the day to send a message.

OUR Walmart – a coalition of current and former Wal-Mart staff seeking better wages, benefits and working conditions – has staged months of protests outside stores and targeted “Black Friday” for action across the country.

The stakes are high for U.S. retailers, who can earn more than one-third of their annual sales during the holiday season, which generally starts with Black Friday.

The National Retail Federation said 147 million people would shop Friday through Sunday, when deals are at their most eye-catching – down from 152 million the same weekend last year.

Wal-Mart Stores Inc’s U.S. discount stores, which have been open on Thanksgiving since 1988, offered some “Black Friday” deals at 8 p.m. on Thursday and special deals on certain electronics, like Apple Inc iPads, at 10 p.m.

The earlier hours lured people who had not braved the crowds before on Black Friday, said Jason Buechel, a senior executive in the retail practice of consultancy Accenture, in observing mall activity.

“There’s no stress, no bustling, no people busting down doors,” said Richard Stargill, a 43-year-old construction worker from New York, referring to incidents such as the 2008 death of a Walmart worker, trampled by a mob of shoppers.

For Edward Segura, 50, at a Target in Tucson, Arizona, with his wife Belinda, 44, and their daughter, the earlier hours were a blessing.

“We’ll shop tonight and tomorrow is freed up for enjoyment. I get to play golf and we’re going to a football game later,” said Segura. “My wife thinks of this as the Super Bowl of shopping, but I’d rather do something else.”

Like many Black Friday shoppers, Segura was looking at televisions. But electronics were not the only hot sellers.

At Macy’s in Herald Square in Manhattan, the line at the Estee Lauder counter was four deep shortly after its midnight opening. The cosmetics department’s “morning specials” included free high-definition headphones with any fragrance purchase of $75 or more, and a set of six eye shadows for $10.

At the Target on Elston Avenue on Chicago’s Northwest side – known as one of the highest-volume stores in the chain – the $25 Dirt Devil vacuum that normally goes for $39.99 was sold out, though there were still several large televisions available. Items such as towels for $2, blankets, kids’ slippers and pajamas were hot sellers.

The day is also a test for retailers shifting strategies, like J. C. Penney Co Inc, which has been suffering from plunging sales as it moves away from coupons toward lower pricing and specialized boutiques within stores.

Amina Kebbeh, 18, of the Bronx, New York, was on line for the 6 a.m. EDT (1100 GMT) opening of Penney’s Manhattan store. Others stood with her, though the line was relatively tame, compared to larger stores and those that opened earlier.

“If they remove the coupons, no one is eager to come,” she said.