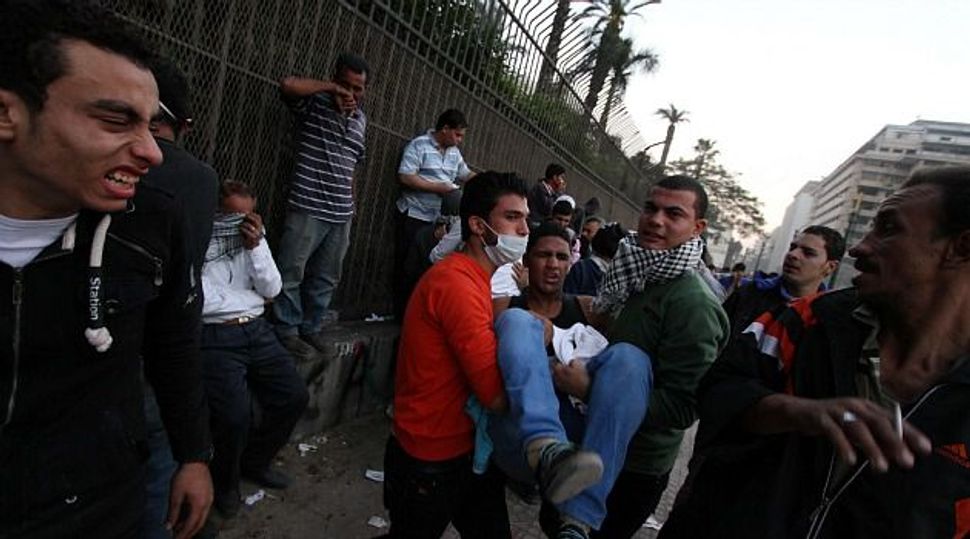 Youths clashed with police in Cairo on Saturday as protests at new powers assumed by President Mohamed Mursi stretched into a second day, confronting Egypt with a crisis that has exposed the split between newly empowered Islamists and their opponents.

A handful of hardcore activists hurling rocks battled riot police in the streets near Tahrir Square, where several thousand protesters massed on Friday to demonstrate against a decree that has rallied opposition ranks against Mursi.

Following a day of violence in Cairo, Alexandria, Port Said and Suez, the smell of teargas hung over the square, the heart of the uprising that swept Hosni Mubarak from power in February 2011.

More than 300 people were injured on Friday. Offices of the Muslim Brotherhood, which propelled Mursi to power, were attacked in at least three cities.

Egypt’s highest judicial authority said the decree marked an “unprecedented attack” on the independence of the judiciary, the state news agency reported.

Leftist, liberal and socialist parties have called for an open-ended sit-in with the aim of “toppling” the decree which has also drawn statements of concern from the United States and the European Union. A few dozen activists manning makeshift barricades kept traffic out of the square on Saturday.

Calling the decree “fascist and despotic”, Mursi’s critics called for a big protest on Tuesday against a move they say has revealed the autocratic impulses of a man jailed by Mubarak, who outlawed Mursi’s Muslim Brotherhood.

“We are facing a historic moment in which we either complete our revolution or we abandon it to become prey for a group that has put its narrow party interests above the national interest,” the liberal Dustour Party said in a statement.

Issued late on Thursday, the decree marks an effort by the Mursi administration to consolidate its influence after it successfully sidelined Mubarak-era generals in August.

The decree reflects the Muslim Brotherhood’s suspicion towards sections of a judiciary unreformed from Mubarak’s days: it guards from judicial review decisions taken by Mursi until a new parliament is elected in a vote expected early next year.

It also shields the assembly writing Egypt’s new constitution from a raft of legal challenges that have threatened the Islamist-dominated assembly with dissolution.

The Mursi administration has defended the decree on the grounds that it aims to speed up a protracted transition from Mubarak’s rule to a new system of democratic government.

“It aims to sideline Mursi’s enemies in the judiciary and ultimately to impose and head off any legal challenges to the constitution,” said Elijah Zarwan, a fellow with The European Council on Foreign Relations.

“We are in a situation now where both sides are escalating and its getting harder and harder to see how either side can gracefully climb down,” Zarwan said.

A central element of Egypt’s transition, the drafting of the constitution has been plagued by divisions between Islamists and their more secular-minded opponents, nearly all of whom have withdrawn from the body writing the document.

Mursi’s new powers allowed him to replace the prosecutor general – a Mubarak holdover who the new president had tried to replace in October only to kick up a storm of protest from the judiciary, which said he had exceeded his authorities.

At an emergency meeting called to discuss the decree, the Supreme Judicial Council, Egypt’s highest judicial authority, urged “the president of the republic to distance this decree from everything that violates the judicial authority”.

Al-Masry Al-Youm, one of Egypt’s most widely read dailies, hailed Friday’s protest as “The Nov. 23 Intifada”, invoking the Arabic word for uprising. “The people support the president’s decisions,” declared Freedom and Justice, the newspaper run by the Brotherhood’s political party.

The ultraorthodox Salafi Islamist groups that have been pushing for tighter application of Islamic law in the new constitution have rallied behind the decree.

The Nour Party, one such group, stated its support for the Mursi decree. Al-Gama’a al-Islamiya, which carried arms against the state in the 1990s, said it would save the revolution from what it described as remnants of the Mubarak regime.

Facing the biggest storm of criticism since he won the presidential election in June, Mursi addressed his supporters outside the presidential palace on Friday. He said opposition did not worry him, but it had to be “real and strong”.

Candidates defeated by Mursi in the presidential vote joined the protests against his decision on Friday. Former Arab League Secretary General Amr Moussa was photographed linking arms with leftist Hamdeen Sabahi, liberal Mohamed ElBaradei and others.

Mursi is now confronted with a domestic crisis just as his administration won international praise for mediating an end to the eight-day war between Israel and Palestinians in the Gaza Strip.

“The decisions and declarations announced on Nov. 22 raise concerns for many Egyptians and for the international community,” State Department spokeswoman Victoria Nuland said in a statement.

The European Union urged Mursi to respect the democratic process, while the United Nations expressed fears about human rights.