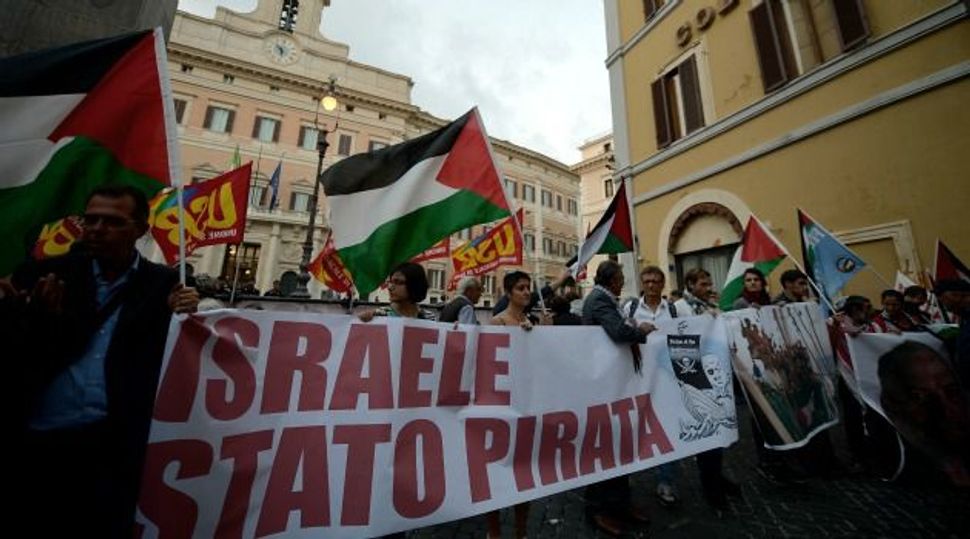 In the wake of mounting anti-Semitic and anti-Israel incidents, Italy’s Jewish leadership has “forcefully denounced” a “spiral of violence” that has erupted in the country over the past few weeks.

“It would be too long to enumerate the individual episodes, but we cannot refrain from drawing attention to a climate of tension that is increasingly worrying,” said a statement by Renzo Gattegna, president of the Union of Italian Jewish Communities.

Apparently prompted by Israel’s recent rocket attacks on Gaza, anti-Semitic slogans were scrawled on synagogues in several cities – the latest was in Genoa, where the slogan “Israel is a Nazi state” was discovered on the front door of the synagogue on Saturday.

Anti-Israel and anti-Semitic slogans were chanted during student and other demonstrations in Rome the past two weekends, and a “Free Palestine” banner was unfurled during an international soccer match in Rome between Rome’s Lazio team and England’s Tottenham Hotspur on Nov. 22.

In addition, Lazio’s far-right militant fans chanted “Juden Tottenham” during the game, and the night before the match dozens of masked men brutally attacked a group of Hotspur fans in a downtown pub. Hotspur has a large Jewish support base in London, who sometimes are referred to as the “Yid Army.”

“Racist, anti-Semitic, homophobic: the proponents of hate fall into different conceptual categories and different modes of action,” Gattegna said. “Linking them, however, is the same contempt for the most basic principles of democracy and the sharing of ideologies that are re-emerging in a growing and alarming way from the folds of a past that did not teach some people anything.”