Morsi To Meet Judges in Bid to End Crisis 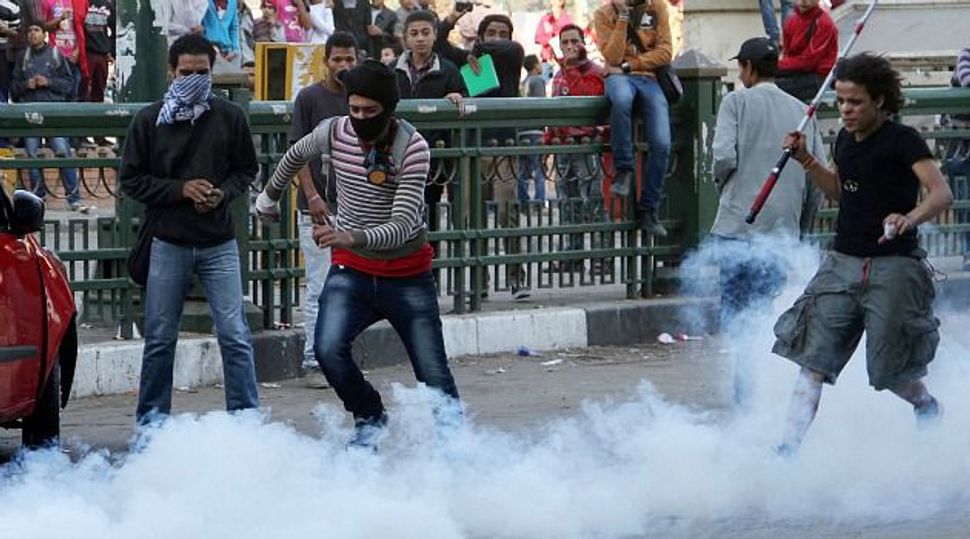 Egyptian President Mohamed Mursi meets senior judges on Monday to try to ease a crisis over his seizure of new powers which has set off violent protests reminiscent of the revolution last year that led to the rise of his Islamist movement.

The justice minister said he believed Mursi would agree with the country’s highest judicial authority on its proposal to limit the scope of the new powers.

But the protesters, some camped in Cairo’s Tahrir Square, have said only retracting his decree will satisfy them, a sign of the deep rift between Islamists and their opponents that is destabilising Egypt two years after Hosni Mubarak was ousted.

“There is no use amending the decree,” said Tarek Ahmed, 26, a protester who stayed the night in Tahrir, where tents covered the central traffic circle. “It must be scrapped.”

One person has been killed and about 370 have been injured in clashes between police and protesters since Mursi issued the decree on Thursday shielding his decisions from judicial review, emboldened by international plaudits for brokering an end to eight days of violence between Israel and Hamas.

The stock market is down more than 7 percent.

Mursi’s political opponents have accused him of behaving like a new dictator and the West has voiced its concern, worried by more turbulence in a country that has a peace treaty with Israel and lies at the heart of the Arab Spring.

Mursi’s administration has defended his decree as an effort to speed up reforms and complete a democratic transformation. Leftists, liberals, socialists and others say it has exposed the autocratic impulses of a man once jailed by Mubarak.

Mursi’s office said he would meet Egypt’s highest judicial authority, the Supreme Judicial Council, on Monday, and the council hinted at compromise.

Mursi’s decree should apply only to “sovereign matters”, it said, suggesting it did not reject the declaration outright, and called on judges and prosecutors, some of whom began a strike on Sunday, to return to work.

The protesters are worried that Mursi’s Muslim Brotherhood aims to dominate the post-Mubarak era after winning the first democratic parliamentary and presidential elections this year.

A deal with a judiciary dominated by Mubarak-era judges, which Mursi has pledged to reform, may not placate them.

Banners in Tahrir called for dissolving the assembly drawing up a constitution, an Islamist-dominated body Mursi made immune from legal challenge. Many liberals and others have walked out of the assembly saying their voices were not being heard.

Only once a constitution is written can a new parliamentary election be held. Until then, legislative and executive power remains in Mursi’s hands, and Thursday’s decree puts his decisions above judicial oversight.

The party’s offices have also been attacked in other cities.

A security source had earlier put the number of wounded at more than 500, but later clarified that this was the number injured since street battles erupted last week with police in and around Tahrir before the decree was announced.

One politician said the scale of the crisis could push opponents towards a deal to avoid a further escalation. Mursi’s opponents have called for a big demonstration on Tuesday.

“I am very cautiously optimistic because the consequences are quite, quite serious, the most serious they have been since the revolution,” said Mona Makram Ebeid, former member of parliament and prominent figure in Egyptian politics.

“This is the most critical and most dramatic moment since the revolution,” she said. “He has succeeded in uniting the opposition camp who for the time being seem to be unison.”

Mursi’s office repeated assurances that the steps would be temporary, and said he wanted dialogue with political groups to find “common ground” over what should go into the constitution.

Talks with Mursi have been rejected by members of a National Salvation Front, a new opposition coalition that brings together liberal, leftist and other politicians and parties, who until Mursi’s decree had been a fractious bunch struggling to unite.

“There is no room for dialogue when a dictator imposes the most oppressive, abhorrent measures and then says ‘let us split the difference’,” prominent opposition leader and Mohamed ElBaradei said on Saturday. He has said he expected to act as the Front’s coordinator.

The military has stayed out of the crisis after leading Egypt through a messy 16-month transition to a presidential election in June. Analysts say Mursi neutralised the army when he sacked top generals in August, appointing a new generation who now owe their advancement to the Islamist president.

Though the military still wields influence through business interests and a security role, it is out of frontline politics.

Images of protesters clashing with police and tear gas wafting through Tahrir Square have been unsettling reminder of the uprising that toppled Mubarak in February 2011 and violence that flared under army rule, scaring investors and tourists.

Egypt had hoped to stop the economic rot by signing an initial deal last week for a $4.8 billion loan from the International Monetary Fund. As well as tumbling share prices, yields at a Sunday treasury bill auction rose, putting even more pressure on the government that faces a crushing budget deficit.

“We are back to square one, politically, socially,” said Mohamed Radwan of Pharos Securities, an Egyptian brokerage firm.

Issued just a day after Mursi received glowing tributes from Washington for his work brokering a deal to end eight days of violence between Israel and Hamas, the decree drew warnings from the West to uphold democracy. Washington has leverage because of billions of dollars it sends in annual military aid.

The decree protects the assembly writing the constitution from dissolution before completing its work, and it now has a deadline of February. The constitutional court, which has declared the Islamist-dominated lower house of parliament void, was expected to rule on the validity of the assembly on Dec. 2.

Many of Mursi’s political opponents share the view that Egypt’s judiciary needs reform, though they disagree with his methods. Mursi’s new powers allowed him to sack the prosecutor general who took his job during the Mubarak era and is unpopular among reformists of all stripes.

Morsi To Meet Judges in Bid to End Crisis